2018: Community Influencer of the Year

At the end of 2016 I started a tradition of giving a shout-out to someone who has made a dramatic impact on the SQL Server community. Not well-known personalities and long-running MVPs like Brent, or Erin, or Paul, but up-and-comers forging their own paths to becoming SQLebrities in their own right.

The first year, I honored my good friend Andy Mallon (@AMtwo), who later became an MVP and, ultimately, a co-worker here at SentryOne.

In 2017, I called out Drew Furgiuele (@Pittfurg), who - like Andy - became an MVP shortly thereafter.

While I don't believe the MVP nods were borne out of this award, I do like to believe that Microsoft is seeing the same things in these people that I do, and that this is a pattern we can turn into a three-peat! So, without further ado, this year I'd like to call on... 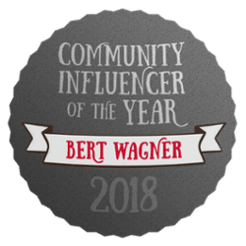 Bert is a prolific blogger (bertwagner.com) and vlogger (YouTube). He has a great knack for explaining complex topics in a simple way, and making them useful and accessible to people of all levels. Video production quality is excellent (I don't want to know how much time he spends off-hours on that), and there is always the right mix of humor. This guy cranks out a new video every single week, including weeks where he shouldn't, like this one he put together while on a hiking vacation in Colorado.

Like Drew, Bert keeps a fun, visual timeline of his speaking activities here. He contributes to multiple Open Source projects on GitHub, including the First Responder Kit and the official SQL Server documentation. He's also pretty active in the SQL Server community Slack workspace, where he helps people on both technical and non-technical topics. And on top of all this, he's a fantastic resource for private requests for help, too. Just ask Andy how Bert has helped him learn how to coffee.

I mentioned my selection to Drew, who then said:

"I love Bert's creativity, and he's so much fun to do side projects with. Not only is he a super talented photographer and videographer (and barista), but his topics show great technical depth. I know I've used his videos and posts as examples to coworkers."

Regretfully, in previous years, I didn't outline who else I had noticed throughout the year. Truthfully, there's never just one person that stands out. In no particular order:

And that definitely is not it; there are lots and lots of other folks out there making a difference. As always, if someone has a positive impact on you or the community you're in, I'd love to hear about them! And you should consider nominating them to be a Microsoft MVP, if they're not already.