Just about every time I look through SQL Server-related questions on Stack Overflow, I see someone describing a problem that they are blaming on their code, but is likely caused by their connection string. The pattern is usually something like:

Using AttachDBFileName and User Instance means that SQL Server is creating a special copy of that database file for use by your program. If you have two different programs using that same connection string, they get two entirely different copies of the database. This leads to a *lot* of confusion, as people will test updating data with their program, then connect to a different copy of their database in Management Studio, and complain that their update isn't working. This sends them through a flawed series of wild goose chase steps trying to troubleshoot the wrong problem. And there are many variations on the problem - a partial list:

This article goes into more depth about how to use the user instances feature, but please heed the very first note (which goes all the way back to the 2008 version of the document):

This feature will be removed in a future version of Microsoft SQL Server. Avoid using this feature in new development work, and plan to modify applications that currently use this feature.

Another thing to be aware of: The logical database name if you just specify AttachDBFileName in Management Studio is the full path to the file. If you connect to a local instance (any edition), you can add additional connection parameters, including this option: 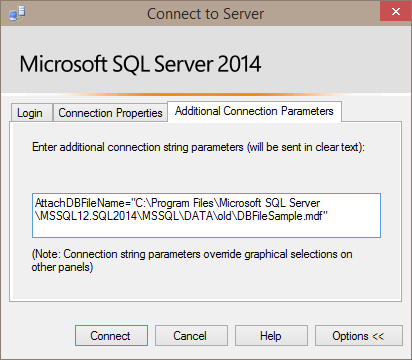 Connecting to an unattached MDF file

Observe how it looks in Management Studio's Object Explorer and sys.databases (and notice how upper case has been forced):

This means that in order to reference the database, you need to say things like:

You can fix this, of course, it's just an additional barrier to getting started and/or using existing scripts that reference a proper, logical database name:

In SQL Server 2012 and above, the preferred alternatives for local development are (in this order, IMHO):

Of course if you are using a version < SQL Server 2012, or you need to peer develop on the same database with multiple users, SqlLocalDb is not an option - so you should be creating a real database on an accessible instance and using that consistently. The connection string above would change to reference the logical name of the database instead of its physical location:

(Your server/instance name may be different, of course; I just find this issue most common with the standard, local \SQLEXPRESS named instance.)