Four years and seven days ago...

...I described the bittersweet decision I made to leave my 13-year stint as a production DBA, and become a consultant for SQL Sentry: 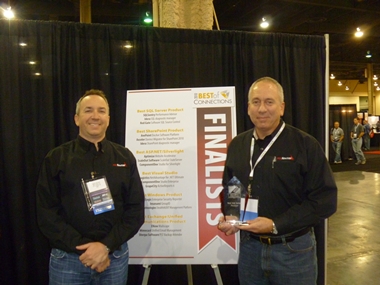 Me with Nick at SQL Connections 2010, where we won Best SQL Server Product

Today marks four years exactly that I have been here, and I hope to celebrate many more of these milestones.

My role hasn't changed much since starting as one of the few reporting directly to CEO Greg Gonzalez (@SQLsensei). Last year, since I have so much external visibility at conferences and online, the org chart shifted me over to the sales and marketing side. Which is not considered "the dark side" here, as it is in many corporations. I still travel to the major shows now, just like I did immediately after coming on board, and I still help our customers out with configuration and performance issues.

My current boss, Nick Harshbarger (@nicharsh), has been a great mentor, co-worker and friend, just as Greg has been throughout my time here (and even before). I still commit the occasional screw-up (the other day I double-tapped mute and typed an entire e-mail before realizing I was broadcasting my thunderdome keyboard for the whole conference call), but they still seem to like me anyway...

Me with Nick and Scott Fallen at TechEd NA 2014

My start date roughly coincided with the launch of Plan Explorer, our free tool for execution plan analysis, and I have since been on-hand to watch us release three new major versions of our Power Suite, as well as adding entirely new functionality like Fragmentation Manager, cloud.sentryone.com, our Availability Groups features in Performance Advisor, and a PRO edition of Plan Explorer. I have also been directly involved with this consolidated team blog, our blogs at SQLPerformance.com, and a companion Q & A site for community assistance with query plan analysis, Answers.SQLPerformance.com (now a read-only archive).

I do not sense any slowing down; in fact we have so many people working on so many new features coming out across our entire catalog, that it's a serious challenge to stay on top of it all.

So, long story short: Quite happy to still be here, and as excited as ever for all of the great things yet to come!