Where do I get SQL Server 2016 Developer Edition?

Back in March, Microsoft gleefully announced that Developer Edition would now be free. But in that time, I've seen plenty of confusion around where to get it. More specifically, where to get it with no strings attached, including questions like, "Can I just buy it so I don't have to sign up for <x>?"

The simple answer is no - there is no free lunch. The three supported methods I know of to obtain SQL Server 2016 Developer Edition all involve either registering or paying. This isn't a bad thing, IMHO; you and I have both given up our e-mail addresses in exchange for things far less valuable than a used-to-be-$49-or-$59 piece of software. But read on, as there is a fourth option that might be more palatable.

If you go to this URL , you will see this screen: 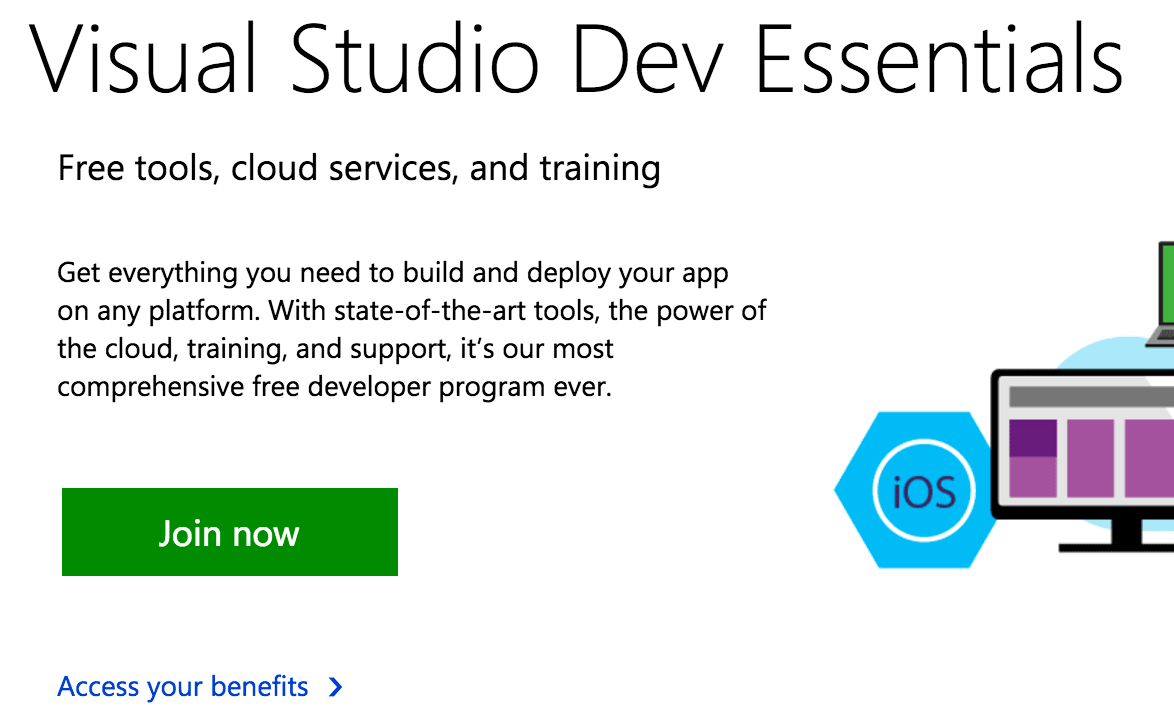 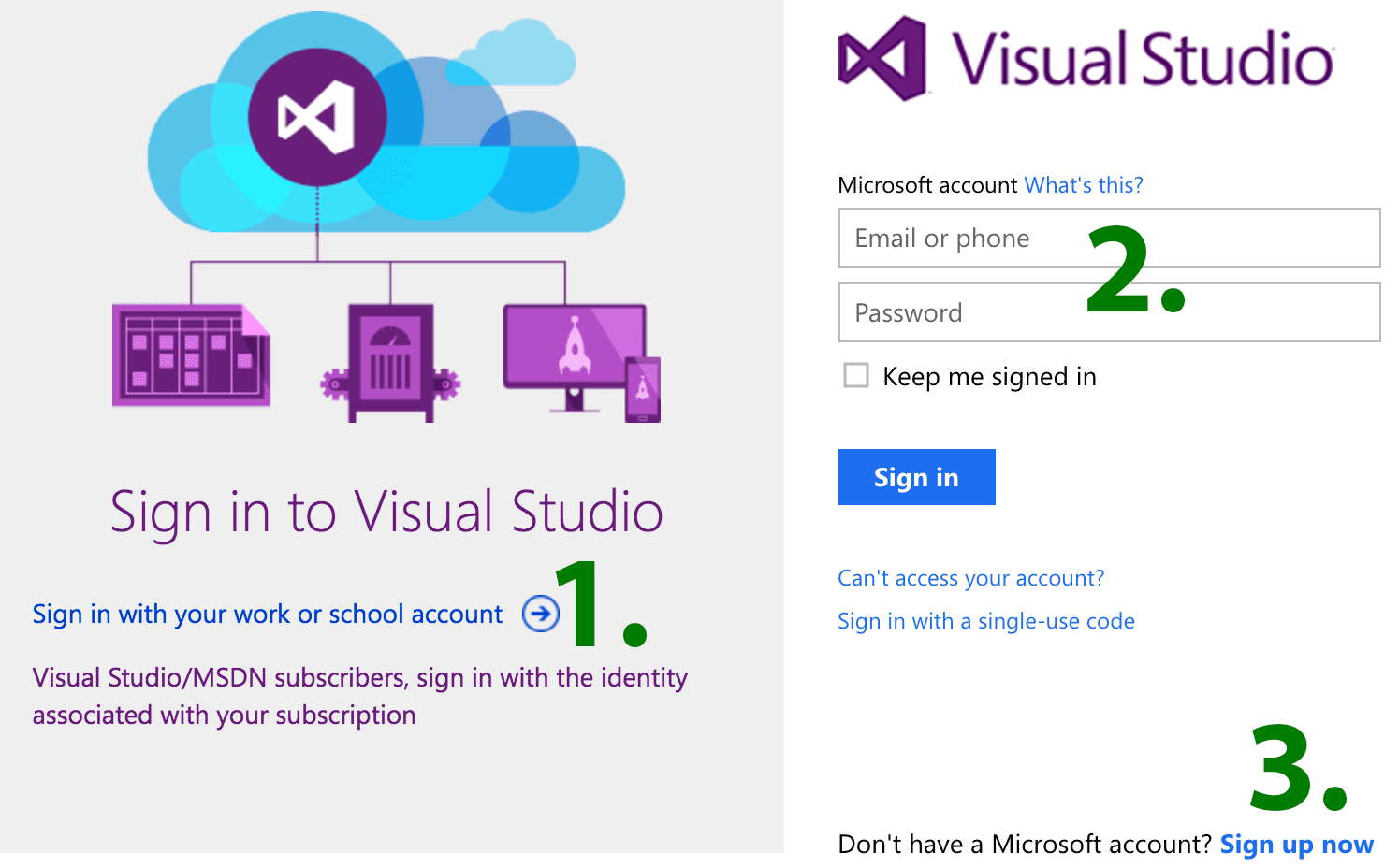 You'll arrive on a screen with a bunch of tiles, including this one, below left. When you click "Download" you will be asked to confirm the prompt, below right. Then you'll need to click "Download" again. 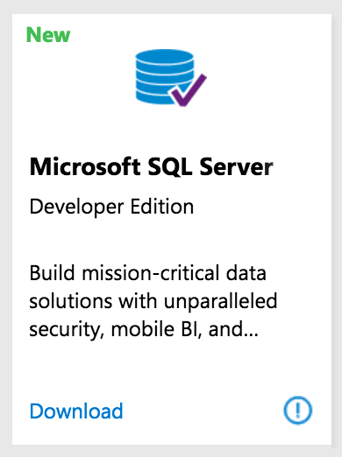 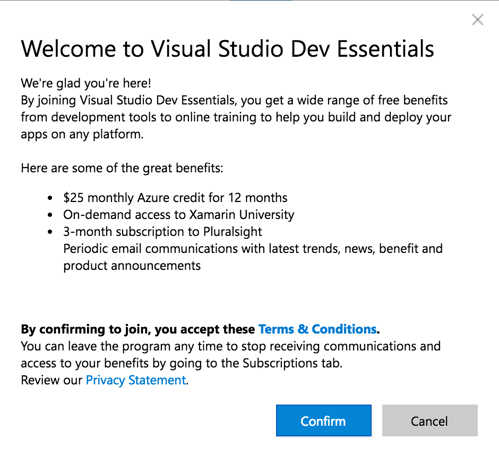 Once you've clicked download again, you'll get this screen, which allows you to download a traditional ISO which you can mount or burn to a physical DVD if you're into that sort of thing:

(This screen will also offer ISOs of SQL Server 2014 Developer Edition. And note that the link to the KB at the bottom is currently incorrect; it should be KB 3164398.)

A few people have objected to signing up for Dev Essentials, but in addition to providing ready access to SQL Server 2016, there are a bunch of other benefits too, such as free access to PluralSight. This route really shouldn't be dismissed, IMHO - again, other than giving up an e-mail address, there's nothing to lose.

Evaluation Edition has a secret

THE CATCH: You have to register.

Go to the TechNet Evaluation Center, where you will see this prompt: 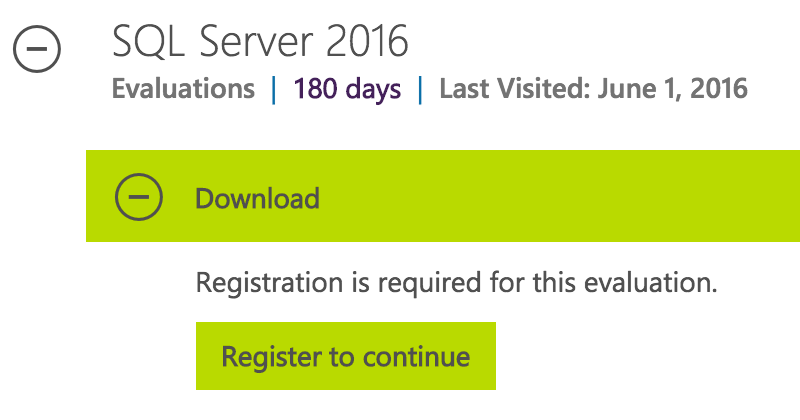 Go ahead and register (use a junk e-mail address if you want), and don't worry, I'll explain why this disclaimer won't come into play:

When you click Continue, you will be prompted to download the file SQLServer2016-SSEI-Eval.exe. This is the new basic installer they blogged about recently. Yes, that file name looks alarmingly like the Evaluation Edition of SQL Server, but bear with me. Once it's downloaded, run it, and choose Custom on this screen (the Basic option is the real sweet spot of this new basic installer, but we're not going to use that option today): 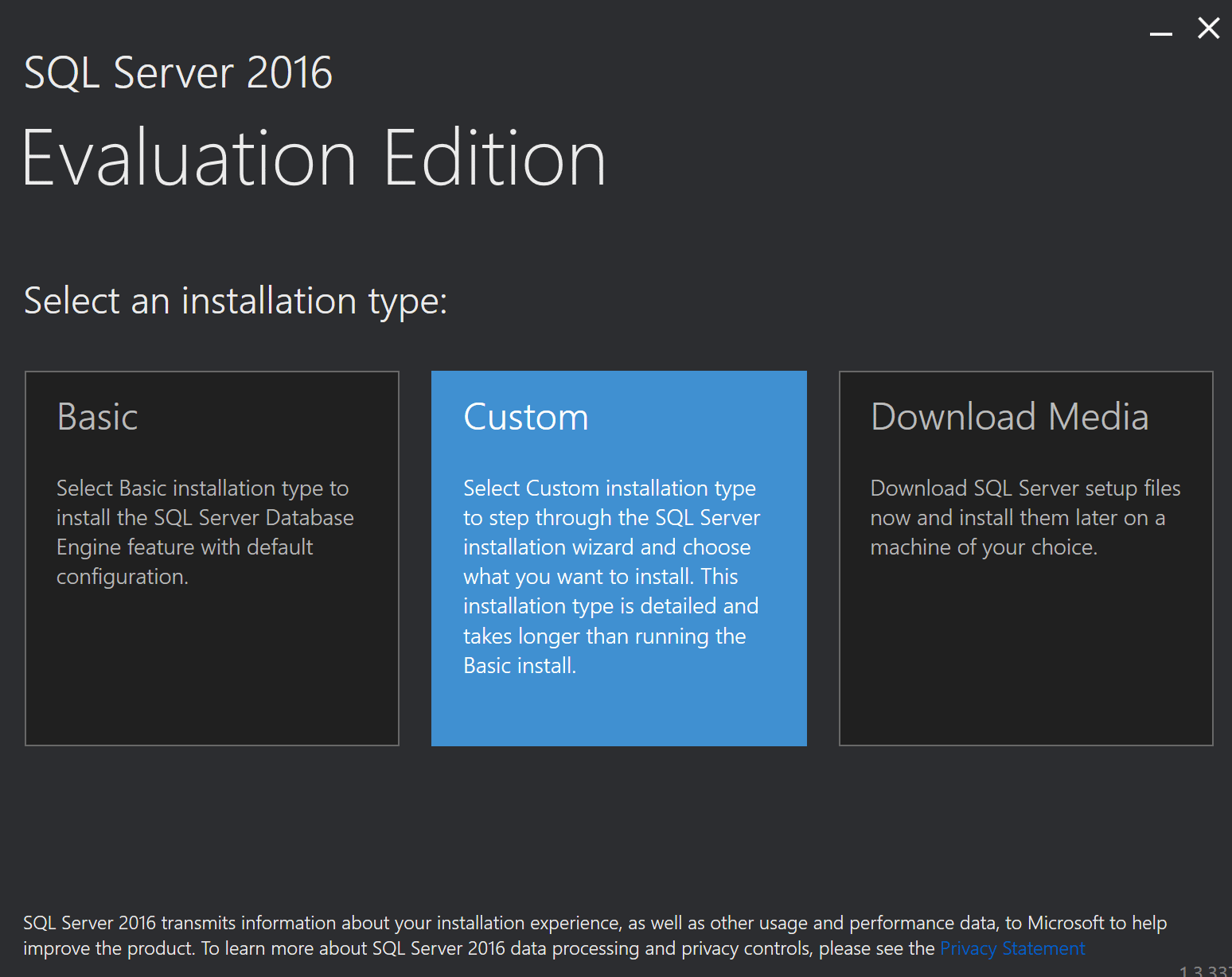 Next, you'll tell installation where to put the files it'll need to download, and then click Install (don't worry, this isn't going to start an actual install yet):

Now you'll be stuck on this screen for a while (especially if you're on hotel broadband, like I am):

This will create a folder called Evaluation, in the chosen media location, and download the ISO contents there. They'll already be extracted, so you can run setup without having to mount an ISO (if you want an ISO instead, choose Download Media instead; further information about that path can be found down below). Inside that is the traditional Installation Center you're probably already very familiar with, and the installer should launch that after the download finishes. If not, just navigate to the folder manually, and run SETUP.EXE. Then choose "Installation" > "New SQL Server stand-alone installation or add features to an existing installation" and proceed through setup as you usually do. On the "Installation Type" screen, choose "Perform a new instance of SQL Server 2016." On the next screen is where the magic happens:

Yes, even though you've registered for Evaluation Edition, you have a choice between that, Express, and Developer. People are skeptical about this, but the ISO is not tied to any specific edition; it is capable of installing any edition, depending on the product key entered, or your selection here.

THE CATCH: You have to pay.

If you have MSDN already (check with your employer or educational institution), this is pretty easy. Just go to Subscriber Downloads, click on SQL Server 2016, and the Developer Edition ISO will be one of the options:

(I've included all the relevant MSDN subscriptions to hopefully make it easier to determine if you are eligible. And again, please note that the link at the bottom is wrong; it should point to KB 3164398.)

There is a "Statue of Liberty" play

When you build a web installer that puts a fancy interface around calls to URIs, it's hard to really keep those URIs secret. I've seen people already point out that you can download the Dev-specific basic installer from the following URL, without having to sign up or register for anything:

Now, keep in mind, that fwlink may change, especially if they roll future CUs/SPs into the package, and the GUID-based URL behind it may change also. But for now this seems to be a bit of a back door - it downloads the new simple installer for Developer Edition (SQLServer2016-SSEI-Dev.exe), and then the process is identical to the Eval Edition steps above, except that things are labeled Developer instead of Evaluation. But just to do something slightly different, let's choose Download on that initial screen instead of Custom: 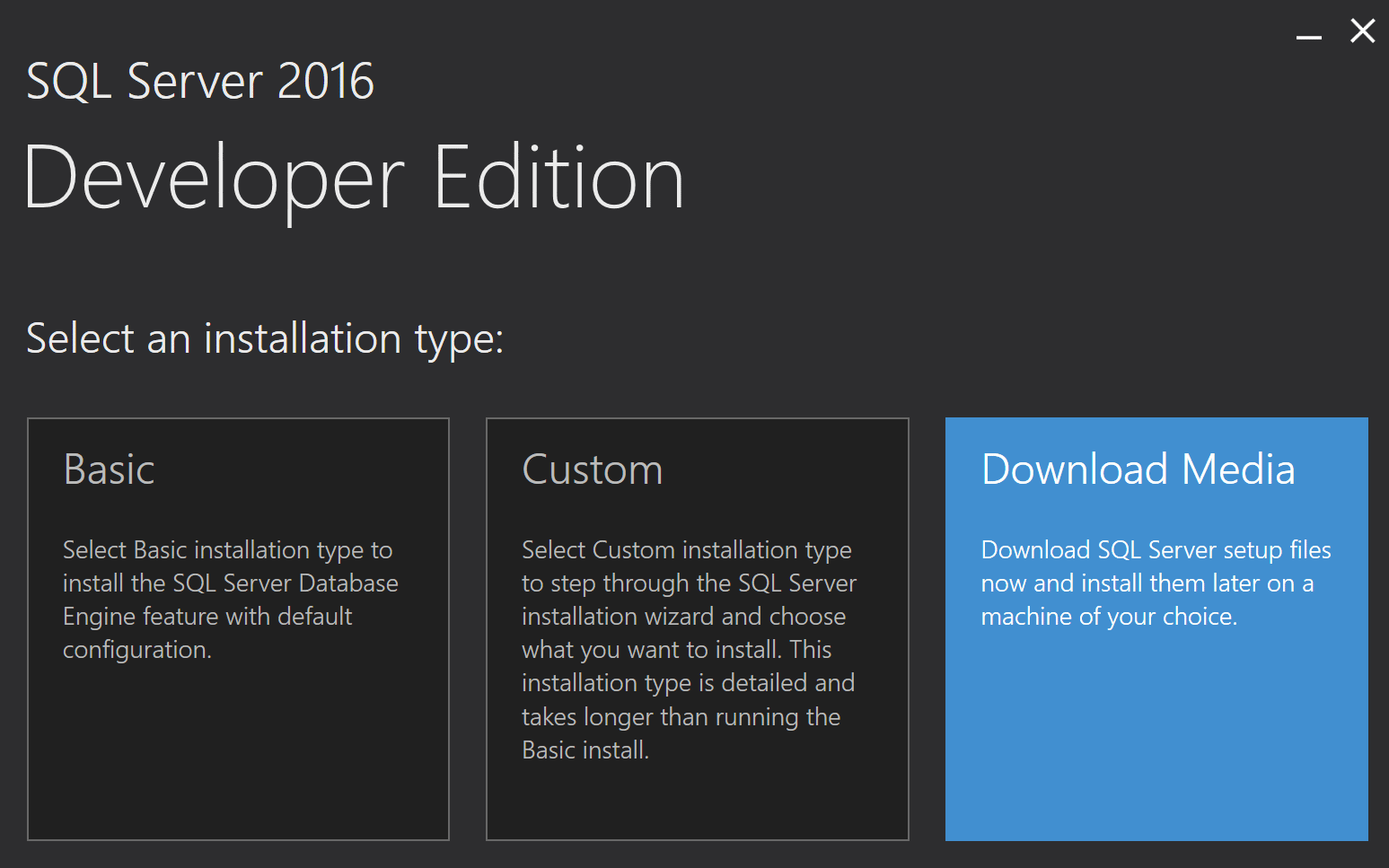 Now you'll have a couple of additional settings to configure: 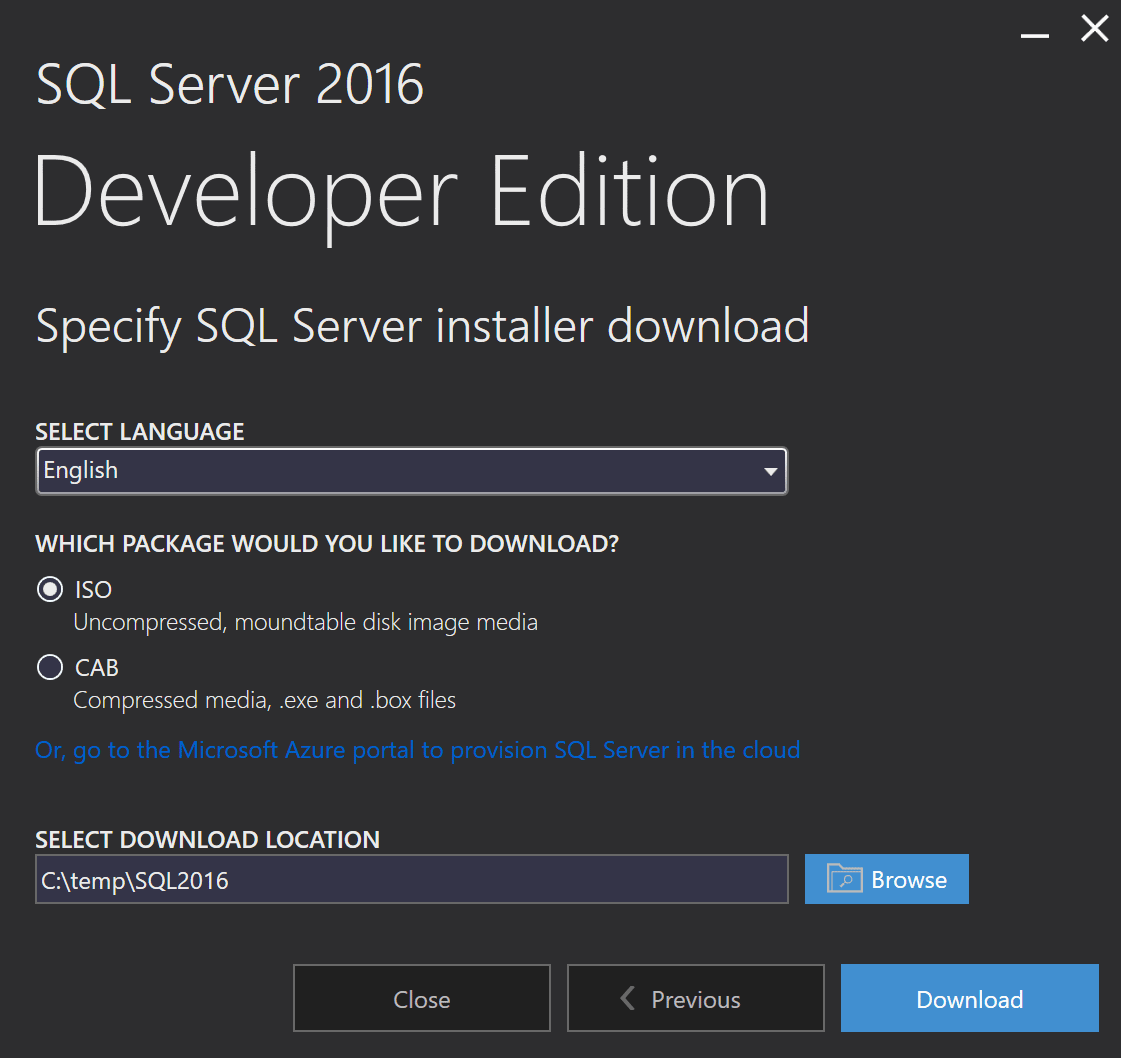 When it's complete, you will find an ISO file (SQLServer2016-x64-ENU-Dev.iso, not the extracted contents), which you can mount and run setup from. If you want the extracted setup files instead of an ISO, stick with the approach using the Custom option I described above.

And about that free lunch...

An e-mail address is a small price to pay for Developer Edition. But for anyone using any of the free editions of SQL Server 2016, you're already giving up something else to get it: telemetry data. As you can read about in KB #3153756, Connect #2775205, and a Brent Ozar blog post, the collection of feature usage data has switched from a default of opt-out in previous versions to a default of opt-in in SQL Server 2016. Further, they have made it a bit harder for users of the free editions (Evaluation, Developer, and Express) to turn off this phone-home functionality (I show how in a post back in April). I suspect most users of these free editions either won't notice this change (which is why folks like Brent and I try to beat the drums about it), or will notice but won't go to the effort to disable it. My fear is not that private data will be transmitted to Microsoft and they will use it in some nefarious way, but rather that someone with HIPAA or similar constraints will inadvertently go out of compliance, and I don't even fully comprehend the potential scope of consequences there.

Note that the ISO you ultimately get, whether it is extracted or not, is RTM, so it does not have the GDR fix from KB #3164398, and it won't be updated with any CUs, either. They usually only post new downloads to MSDN when they have built a fresh ISO with a new service pack slipstreamed, though I don't know how that will change with their frequent changes to the servicing model and release strategy. Please use the check for updates feature during setup, regardless of which approach you take.