So I'm sitting here in the speaker room at SQL Saturday #357 in Cleveland; I gave a pre-con yesterday, a session on triggers this morning, and a lunchtime session on SQL Sentry Plan Explorer. A little beat, but I wanted to share with you something that I thought was pretty cool.

David Maxwell (blog | @dmmaxwell) came up from Columbus to speak at this event. David brought his daughter, Evelyn, who is in the 6th grade - I believe she is 12. This was not Evelyn's first SQL Saturday; it was her third. When I first met Evelyn I remember thinking to myself, "Wow, what a polite and well-spoken girl."

Later on, in the speaker room, she helped one of my fellow speakers figure out how to change the background color on a single slide in PowerPoint. She's in grade 6, remember. I quickly learned that it is very common for their class to present using PowerPoint (and I made a joke that when I was in the 6th grade, if I could figure out how to glue two pieces of construction paper together, I would get an A).

So this was all pretty cool, but what happened next kind of amazed me. David brought Evelyn to my session on triggers, they sat in the back, and were quiet. At the end of the session people filled out their evaluation forms to get in on the raffle for a book (the winner walked away with Benjamin Nevarez' SQL Server 2014 Query Tuning & Optimization). A minute or so later, Evelyn walked up and handed me her evaluation.

Yes, you read that right, Evelyn provided feedback on my session. I won't describe it, just show you exactly what she wrote: 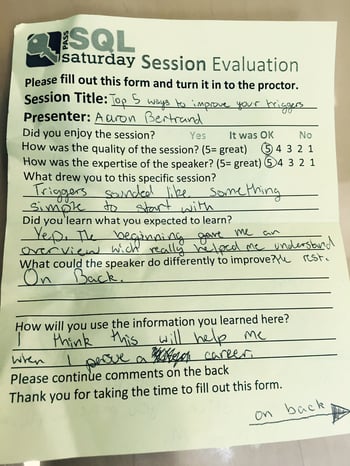 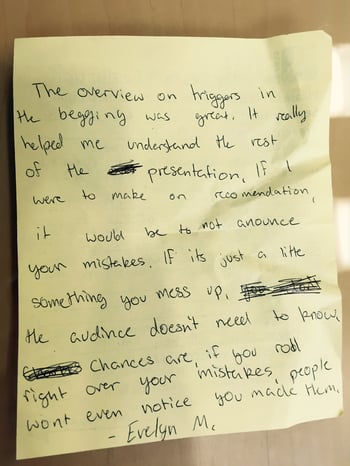 What an amazing, insightful piece of feedback. From a 6th grader.

I've lost count of how many sessions I've presented in my career, and how many evaluations I've received. And this was - by far - the most thoughtful and honest piece of feedback I've ever seen.

I don't attend a lot of sessions when I'm at these events, and when I do, I'm not very good at providing feedback unless asked. I've now learned from a 6th grader how much better I need to be about this.

In the meantime, David, whatever you're doing, keep it up. And please tell me your secret. My girls are both under 3, but I hope to foster the same kind of values and behaviors in them as they grow up.