I travel, I present, I set up demos and repros, I solve customer issues, and I blog about a lot of different scenarios. As you can imagine, I have a lot of VMs lying around on external SSDs, and many of them are different versions/editions of operating systems, so I don't get a lot of use out of creating some kind of master image. This means that whenever I want to set up a new scenario, I install Windows, then I install SQL Server.

And I'm terrible at it.

Here is where I trip up during setup. Every time.

Without fail, I forget to enable the .NET Framework 3.5 feature, and I am plonked on the head as soon as I get to the "Feature Rules" screen in setup. Note that this as many as 10 or 11 screens into setup, depending on what options you've selected.

Thankfully, the fix doesn't require you to re-boot or to even cancel setup. Just go to Programs and Features, Turn Windows features on or off, and check the box ".NET Framework 3.5 (includes .NET 2.0 and 3.0)." Windows will prompt you to go online to get the updates, and once it's done, you'll be able to return to SQL Server setup and press the Re-Run button. 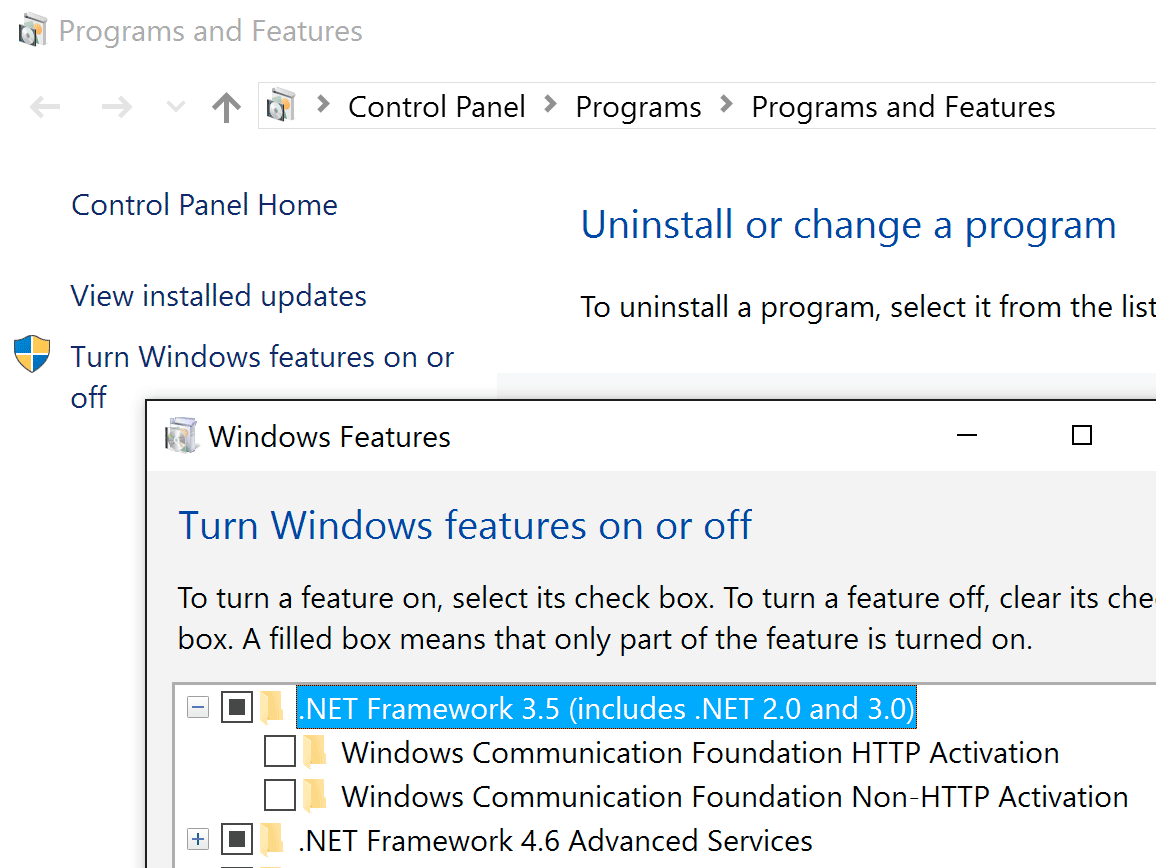 Still, I do hope this problem stops occurring - either by the Windows team just turning this feature on by default, or the SQL Server team removing whatever dependencies they have on it.

Andy Mallon (@AMtwo | blog) has an interesting workaround in the meantime - he created a Powershell script that he uses which enables .NET, if necessary, then launches setup. He agreed to share that script below.

On the Database Engine Configuration screen, you're asked to choose mixed auth vs. Windows auth only, enter a password for the sa account, and add any administrators (I think most of us pick "Add Current User" to start). Well, this is the point where I realize I let Windows pick a stupid name for my computer (again). I realize this because the list becomes populated with this:

Wow, what an ugly computer name. And even though I've invested a bunch of time in this setup already, I have to fix this now, because it is much cleaner than doing the awful sp_dropserver/sp_addserver rigamarole later. Unlike the .NET rule above, in this case, I do have to completely cancel out of setup, go to system settings, rename the computer, and reboot to start all over again.

Yeah, that is so much better. I joked with Andy that his script could also prompt the user, asking them if they are happy with the computer name; if they say no, it stops, and tells them to try again when they've renamed it - this can also save some time. He incorporated that into his script, but warns that he only tested it in one case.

Andy noted that his server build script is a little different, since client versions of Windows block Add-NewWindowsFeature. Here is the version he uses on servers:

I'm sure I'm not alone in either of these (or both). Hopefully writing this post will serve as a reminder to both of us to stop messing this up. Since I don't foresee any non-Windows 10 VMs in my immediate future, now that 10240 is officially out, I'm going to go build myself a base VM image with a proper name and .NET 3.5 installed.