SQL Cruise Alaska 2017, the last official SQL Cruise,* is in the books. This was my third SQL Cruise - two to Alaska and one to the Caribbean - and the one which made my brain melt more than any other.

* (SQL Cruise is now Tech Outbound, offering technical training events on both land and at sea.) 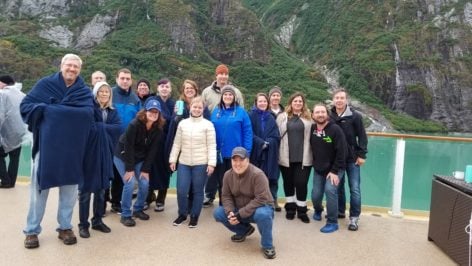 We boarded the Norwegian Jewel on Saturday, and had the usual "search" party (a kind of scavenger hunt for SQL Cruise attendees and their families), which is always a great way to get to know others on the trip. Getting other passengers or crew members to take our pictures (because selfies can't include the whole team) is always amusing.

Sunday and Thursday we were at sea, so it was all classroom all day. The sea was rough, and I was not the only queasy passenger. Having windows in our classroom made a big difference: keeping an eye on the horizon helps steady the equilibrium. 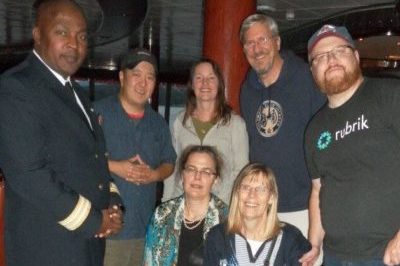 Getting the required picture with a ship's officer.

The big treat for everyone in the group was, of course, Bob Ward (Microsoft) (t). Bob went into details on supporting SQL Server 2017 on Linux, and covered the various Linux distributions and how to manage SQL Server on each of them, and also explained Docker installations. This was a real peek behind-the-scenes, with someone who's been involved in this from its inception, so he went into a lot of detail. There are a lot of IT shops which won't support any operating system but Linux, and this will now allow these shops to run SQL Server. I think this is going to be a very large market, and so does Microsoft, but the learning curve for Windows admins is going to be steep. Bob's session helped get the cruisers started on that path. (I spent time as a Unix admin in the early-to-mid 90s, so in many ways it was a refresher for me, but things have changed since then.)

Bob also did sessions on In-Memory OLTP and on Machine Learning. He helped us understand the benefits as well as the caveats of using In-Memory OLTP, helped us understand how to set it up, and how to prepare for system failover. He also got into the internals and how to monitor performance of this great feature. He also went into detail in his Machine Learning session on how to set up and use R Services and Python in SQL Server, and how the SQL Extensibility Feature allows these popular languages to be supported within the framework of the SQL Server engine.

By the end of the week, my brain was melting. I'm still trying to process all the material presented on this trip. Tim Ford (b/t) does a wonderful job putting together the right mix of beginner and advanced material for these events, and the relationships developed during them have blossomed into long-lasting friendships. Connecting over a deep dive into technical and professional development training has helped many of us advance our knowledge, and our careers, far beyond expectation.

Oh, and we visited Ketchikan, Juneau and Skagway, Alaska, and Victoria, BC.