Not a week goes by that I don't run across either a comparison of server-side (file) and Profiler (rowset) trace performance, with rowset ending up with the short end of the stick; and/or someone who's afraid (or not allowed) to run traces against a production server because it will undoubtedly kill SQL Server performance.

The amount of misinformation out there on this topic is mind-boggling – IMO it's one of the most misrepresented aspects of SQL Server. Unfortunately, it seems many have taken the misinformation at face value, and have perpetuated it without performing sufficient diligence.

There are a some key points that always should be, but rarely seem to be, considered when discussing the performance impact of tracing:

We recently conducted some cursory tests, primarily to confirm the blocking/non-blocking behavior described above. We simulated high activity via a lightweight T-SQL statement in a 1 million cycle loop, and used a trace with only "Completed" events and no filters. The goal was to generate 1 million trace events as quickly as possible, and assess the impact consuming those events by each trace type had on the total load run time. I want to emphasize that this is an isolated test scenario, and the results should not be over-generalized. We plan on conducting much more comprehensive testing in the near future. Nonetheless, the results are interesting:

It seems that with remote tracing, you can pay me now with rowset, or pay me later with server-side. Although the results were repeatable, I'm not publishing test details at this point because these tests were not strictly controlled. The point here is that trace impact on performance is always an "it depends" scenario. Unfortunately it rarely seems to be presented as such – blanket statements such as "Profiler is dangerous" and "server-side traces are always faster" are commonplace. Sure, consumer type and location, network speed, etc., can certainly affect the performance impact of rowset traces, but so can writing a server-side trace file to the same spindles as a busy transaction log... and the impact can potentially be much more detrimental to your SQL Server.

Many thousands of SQL Servers are monitored 24/7 by our rowset-based trace server and we haven't had a single report where its impact on the target was even noticeable, so we're always puzzled by the anti-rowset sentiments. I've tried to assess how the confusion and fear started, and much of it seems to have a common source: the "Standard" Profiler trace: 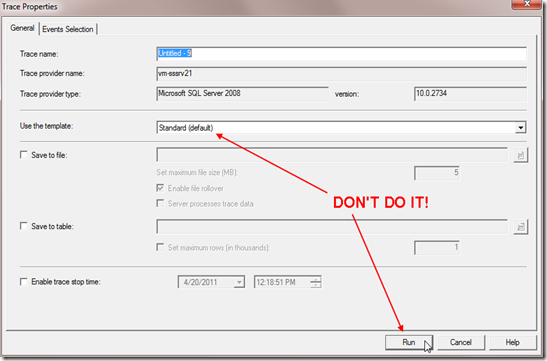 It's been with us forever, and I'm not sure who created it as the default trace... but best case it is of little to no value, and worst case it is dangerous to your SQL Server. Presenting this trace as the default to a SQL Server newcomer is analogous to putting a loaded weapon in front of a toddler. There are no filters applied, and it includes Audit Login and SQL:BatchStarting events, neither of which are filterable by any performance metrics (Duration, CPU, Reads, Writes), meaning you will be capturing all of them. It also includes Audit Logout, which is effectively not filterable by Reads or Writes when connection pooling is in use, since those metrics are cumulative. On a busy OLTP system this trace is bad, very bad! 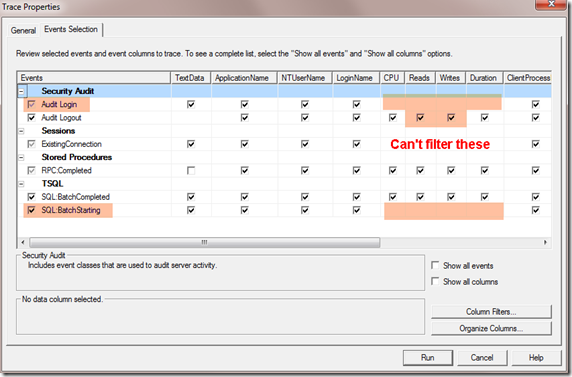 So unless you've changed the default trace (easy to do via Edit Template), every time you open Profiler you've got a very high overhead trace as the starting point. As a result, this trace is referenced in books, trace performance benchmarks have been conducted and published using it, and countless users have naively run it as-is against busy servers. I'm convinced that this is a big reason that Profiler is so frequently kicked around, and why so many are now afraid to use it at all.

Bottom line: Don't use this trace! Certainly don't use it alone for benchmarking the relative performance impact of the two trace types.

A true comparative test should consider:

In the meantime, don't fear the trace. If you target the specific events and columns you need, and use conservative integer-based filters to restrict the rows returned, the benefits gained through intelligent analysis of the data should far outweigh any performance impact on your SQL Servers.