Fun with JSON, SQL Server, and SentryOne (JSON, not Jason)

What Am I Doing and Why?

I wanted to dig into the JSON functions in SQL Server, which were added in SQL Server 2016. I’m still doing web development backed by services when duties allow it, and anyone living in that world will know how ubiquitous JSON is. SentryOne also uses it a lot more than one might imagine, and I figured the best way to dig into this and make it stick would be to do something potentially useful with it for SentryOne users leveraging SentryOne data.

I don’t want to go too crazy with this just yet, so to keep it simple, I’ll be using a super small Advisory Condition to guarantee it has the shape I’m looking for. That means we’ll start by defining the Advisory Condition.

What I want here is a condition that actually makes sense to use, but also doesn’t really include a ton of logic that I need the Advisory Conditions evaluation engine to do for me. I want to compare counters that are fairly volatile as well, so my data isn’t overly boring.

CPU is volatile, and SQL Server waits are volatile. It also makes perfect sense to compare resource waits against CPU (signal) waits. This essentially answers the question, “Am I waiting on CPU more than resources?” So, I made a little Advisory Condition that tests for this across wait types.

Here is the visual definition:

The image is a bit small, I know, so let’s look at the JSON representation from the SentryOne database table “DynamicConditionDefinition” for something easier to read.

Here is the JSON signature for my Advisory Condition:

This has a bunch of stuff in it that tells the evaluation engine how to treat the condition. It’s all very interesting, but what I care about right now is the expression. There could be several expressions, but for this one there is only one. That one expression looks at Resource Waits on the left, and CPU waits on the right. A comparison is made, but for the purpose of this article, we’re not paying attention to the comparison. Let’s let SentryOne’s evaluation engine deal with that.

So, really all we are looking for from this is the following:

The counter from the left:

The counter from the right:

You might be wondering why those CounterIDs have negative values. I’ll get to that, but it’s a very good question, so kudos to you for noticing!

Circling back to the inspiration for this article, we can use the SQL Server JSON functions to get these values for us without all the other stuff:

Here is the output from that query: 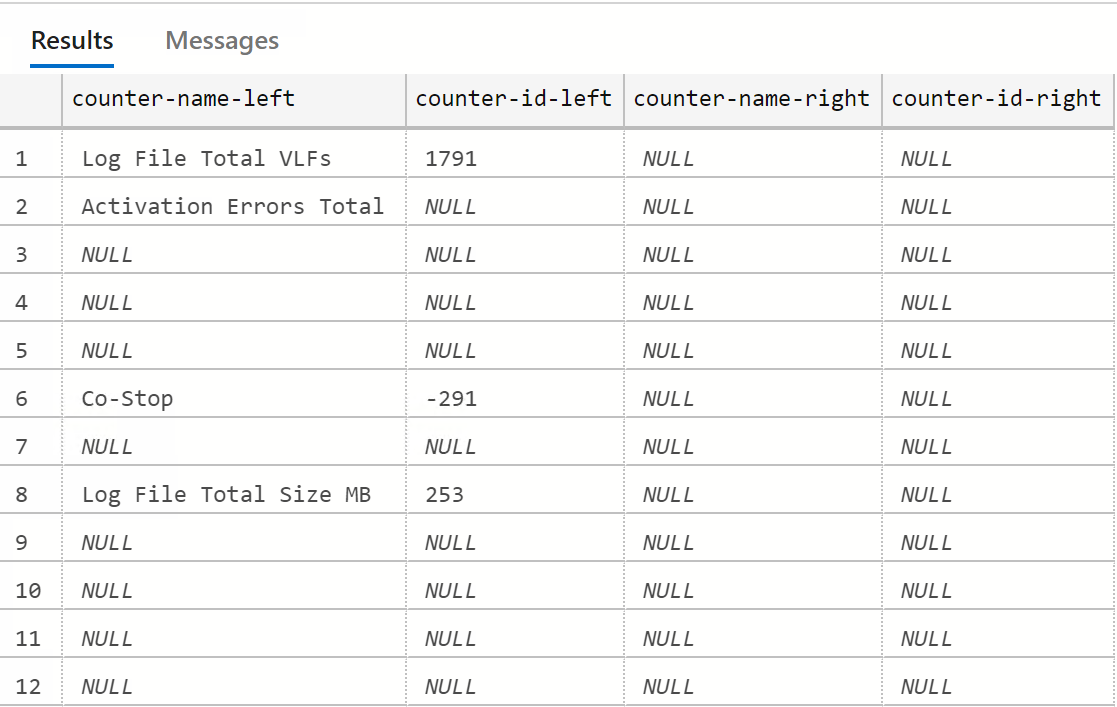 I’m primarily pointing this out to show you that I get nulls and not errors. This is important to understand because it lets me know that there is some forgiveness built into how the JSON functions handle things. As long as I am asking for something that could be valid in JSON, it won’t blow up on me. If your query is blowing up, you need to look at “how” you are asking. If it’s giving you nulls, you should look at “what” you are asking for.

There is a lot more you can do with JSON in SQL Server than what I’m doing here, but we’ll save more for later. This is going to get long enough when I get into why those CounterIDs are negative numbers. If you want to learn all about the JSON functions, you should check out this Microsoft resource. Just do it after you read this blog, because I have a lot more to go through.

Let’s Get Some Data!

Normally when I have a CounterID in SentryOne, the schema I need for querying values is somewhat intuitive. Intuitive doesn’t mean obvious, but you can figure it out with some digging. Things are generally named after what they are for this very purpose. You can also take a trip back in time to use these SentryOne blog posts with confidence that they are still relevant today.

There is an exception. Remember those negative CounterIDs? Those have very real meaning in SentryOne. If you ever run across them, it indicates that you are dealing with what we call “Virtual Performance Counters.” The least complicated way I can explain this is that it is a mechanism that allows SentryOne to track an abstract or projected view of performance data. I won’t get into too much detail here for fear of the IP police arresting me, but in this specific case, it means that I need to take an extra step or two to get what I need because these counters are likely made from multiple other sources. The database table “PerformanceAnalysisVirtualCounter” will tell me how to get the values.

Let’s have a look at that:

Things I care about from this table are “DataSource” and “RawCounterID.” The developers who added these counters saw into the distant future. I’m 100% certain they said, “One day, Jason will need to use these for an article. Let’s make it easy on him and provide stored procedures to use.” This sort of thing happens all the time at SentryOne. Our developers are organized according to their precognitive ability. Moving on…

DataSource tells me what to use to dig up the values I want, and RawCounterID tells me what actual (meaning not virtual) CounterID to use when something in the DataSource asks for a CounterID. These are two key pieces that I need to keep going.

The procedures from DataSource both have the same signature: 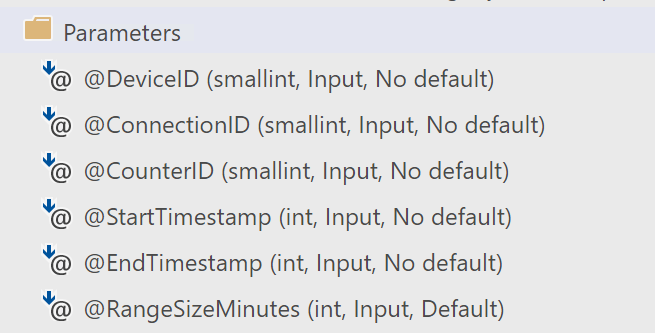 Here’s a table describing these parameters:

A simple call to one of them looks like this, which I snagged from a SentryOne QuickTrace while I was refreshing the performance dashboard:

Note that we’re getting waits by their type. I want granular detail here, but due to the clever and organized treatment of wait statistics by SentryOne internals, I could scope this to a higher level. This is one of the things that makes SentryOne monitoring special. Waits are something you know to look at, but you can get lost in them. SentryOne starts by summarizing waits into categories for you. Then classification takes it down to a slightly lower level. Finally, when you need to go down the rabbit hole, you can go as deep as you like with the specific wait types. All the relevant types are there with the less useful ones held back, so there is no garbage cluttering up your rabbit hole. I like the rabbit hole, so we jumped right in.

Because I want to use this elsewhere, I messed about with it to get something a bit more malleable. This isn’t normally my coding style. I used a scripting option from Azure Data Studio (try it, you will like it), and I worked on it a bit from there.

Now, let’s take inventory. We have:

What else do we need? Well, this all feels a bit disjointed, so let’s bring it together. Brace yourself.

And it isn’t complete unless we can see some results:

The End, for Now

This is where messing with JSON functions got me, folks. It’s a bit longer than I planned, but this is really just how I learn things. It helps retention immensely if I can apply it to something that might be useful. There are certainly other ways to get this data, including just looking at it in your SentryOne GUI or reports. I think approaching it from the angle of the Advisory Condition is interesting, and if you try this, you’ll see that it is pretty snappy. That is likely because it uses the built-in stored procedures to gather the counter data. They are optimized where some random query I wrote likely would not be.

I’m definitely not done with JSON in SQL Server. Maybe next time I’ll see what I can make for all those Advisory Conditions where I don’t already know exactly how the signature is shaped.