Getting Started with the SentryOne Portal 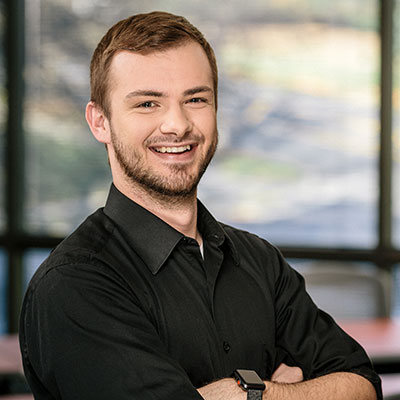 Hello there! My name is Cody Lee; I am one of the Software Development Engineers in Test (SDET for short) at SentryOne.

In this blog post, you will learn how to download the SQL Sentry Unified Installer, where to install it, the overall SentryOne Portal installation and authentication steps, and general SentryOne Portal configuration. I'll also point out documentation that will help you dive more deeply into the SQL Sentry ecosystem and all the rich features available to you.

Where to Get SentryOne Portal

Download the SQL Sentry Unified Setup executable file from my.sentryone.com. If you don't already have an account, you can create one by purchasing SQL Sentry or signing up for a free SQL Sentry trial.

Once downloaded, the file name will be "SentryOneSetup-x64.exe".

Determining Where to Install the SentryOne Portal

There are a few things to consider when choosing an installation location for the SentryOne Portal:

Now that the SentryOne Portal has been added to the SentryOne installer, you will see a new option on the Custom Setup screen during installation.

For the purpose of this walk-through, we will discuss installing only the SentryOne Portal, so you want to select Monitor Portal and deselect everything else prior to continuing installation. 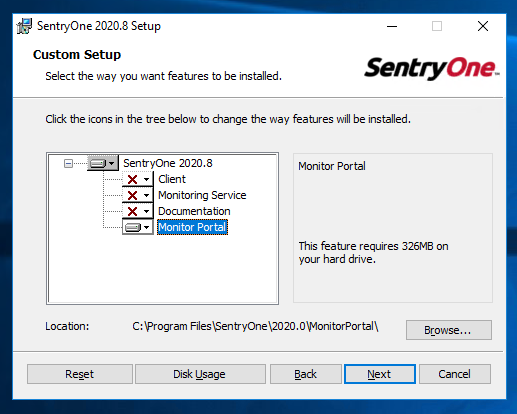 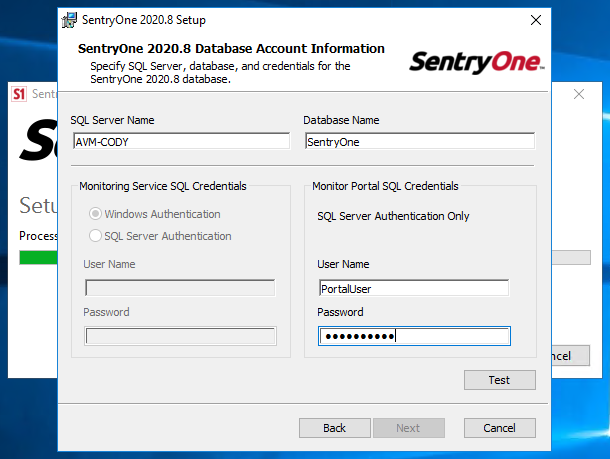 After a few seconds you should receive a confirmation that the credentials were properly validated. Otherwise, you'll receive an error message providing some information on what went wrong. If you have trouble connecting, the SentryOne Support team is ready to help.

Once you are done configuring these values, click the Test button, which lets the installer validate the settings to make sure no other services are already using the port specified. 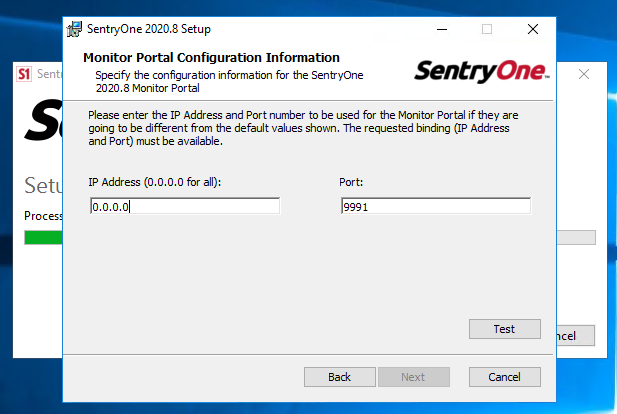 Regardless of the settings used in the previous step (default or custom port, for example) this next step is important to ensure the SentryOne Portal service can be reached outside of the machine it is being installed on.

Inbound and Outbound rules need to be added to Windows Firewall security settings for the specific ports used during the setup. It's important to note, however, that you should be sure to consult with your system administrator prior to adding or modifying any security settings. Your environment might be different than this example scenario, so it is always best to double-check security settings!

Now that all the basic configuration has been performed, the rest of the installation process can be completed. These steps are explained in great detail in the installation documentation, so be sure to reference that page.

Once the SentryOne Portal installation has been completed, you should find a new service running on the machine called "SentryOne Monitor Portal." If the Services program was already running, you might need to click the refresh button to see the new service.

After you have confirmed the new service is running, you can open a browser and navigate to the SentryOne Portal URL.

This URL depends on the settings that were used before, but in this case you can navigate to the SentryOne Portal using one of the following URLs:

After navigating to the SentryOne Portal URL, you should see a page very similar to the one shown in following screenshot: 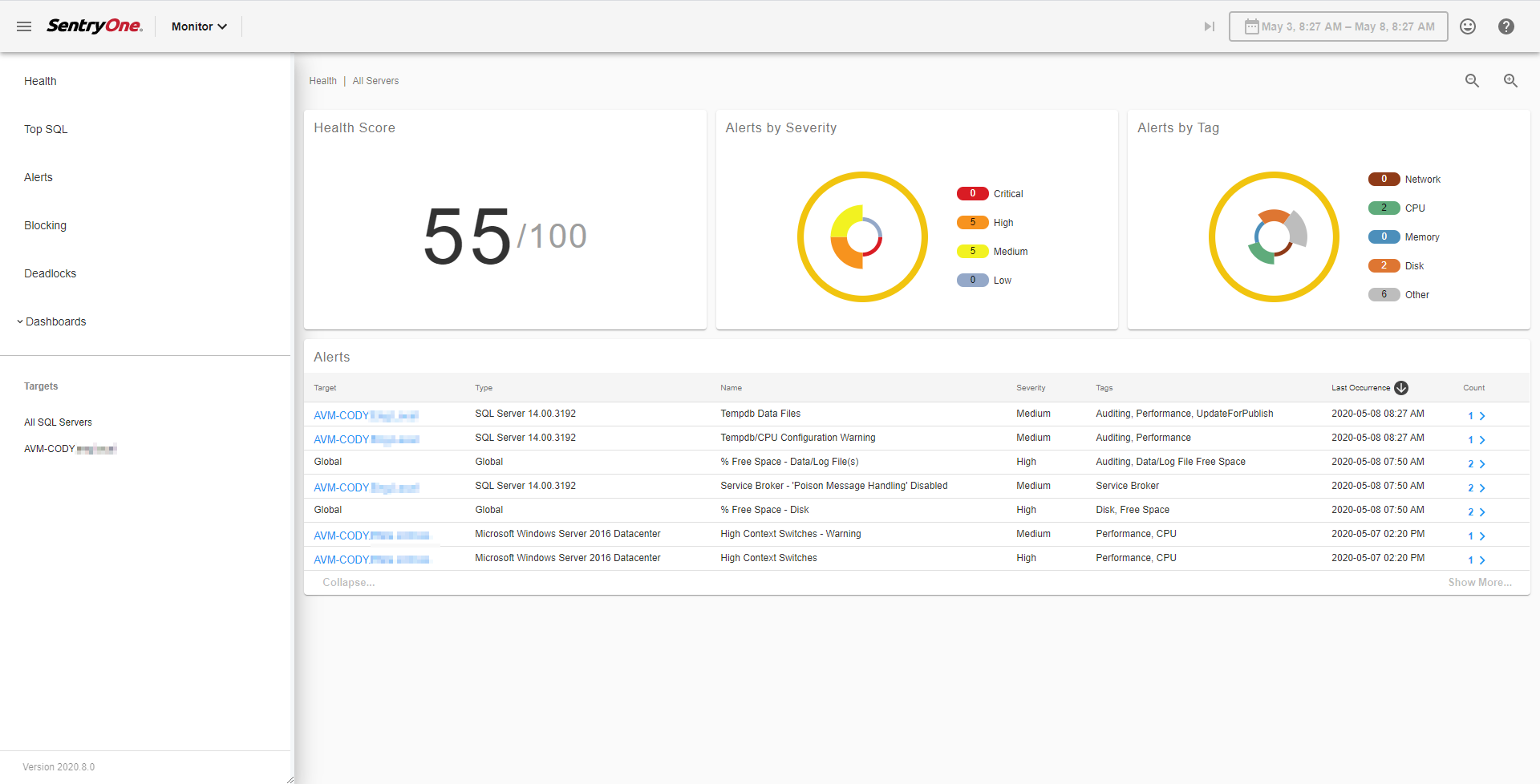 Now that you have the SentryOne Portal installed and running, you can explore its features to get a better understanding of the health of the environment you're monitoring with SQL Sentry. If, at any time, you need to modify a SentryOne Portal setting, we provide an application to help you through those changes. 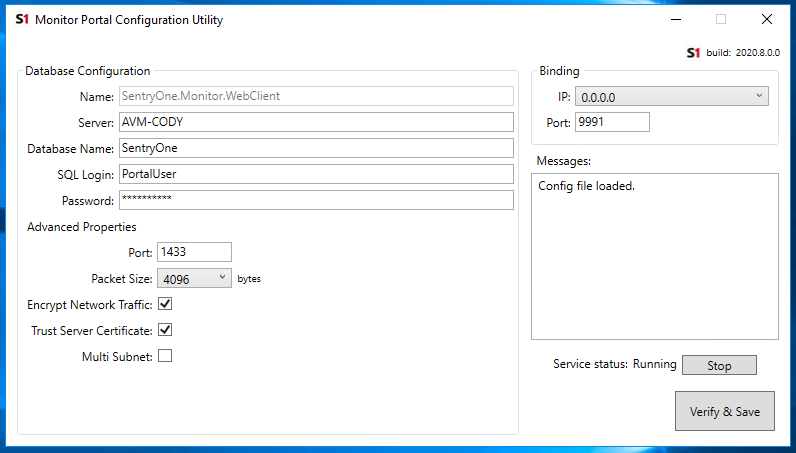 The basic configuration options include:

Once changes are made to the configuration, click "Verify & Save." A message will be added to the Messages area letting you know the save was complete and that you can close the Configuration Utility.

Stay Up-to-Date on the Latest Features

New features are always in the works, so be sure to check out the SentryOne Change List periodically to keep up to speed on the latest and greatest SQL Sentry features! 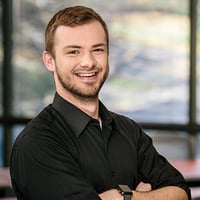 Cody is a Senior Software Development Engineer in Test (SDET, for short) with a passion for quality and value-driven process. Cody started with SentryOne in 2017 on the Plan Explorer team, and since then has gotten many SentryOne products under his belt. Currently, he is focused on SentryOne Monitor and SentryOne Portal.