SentryOne: The Evolution of a Company and a Platform

It's been not quite a month since our last big announcement, the decision to take Plan Explorer Pro free, and here we go again with perhaps even bigger news:

We are unifying our product set into new, targeted solutions, and changing our corporate brand from SQL Sentry to SentryOne!

I will share all of the details below, but let's get a few questions out of the way first:

Q: Has your focus changed?
A: No, it hasn't, and I don't expect that it will any time soon. We remain committed to delivering the premier solutions for monitoring and optimizing the Microsoft Data Platform and its constituents. The new brand isn't about a change in direction as much as it is a better reflection of who we are today.

Q: Did your investors prompt the changes?
A: No, they didn't, but I think they will like it. I'm kidding, they are well-aware and fully supportive.

Q: Is this related to the recent change to make Plan Explorer 100% free?
A: No, it is not directly related. Although they both go towards simplification, the decisions were made independently and the timing is merely coincidental.

Q: Is the product lineup changing?
A: Yes and no. The features and functionality will look familiar, however, the packaging has changed dramatically and some high value features around reducing time-to-value have been added. See below for details.

Before I dig into the nuts and bolts of the changes, a quick review of how we got here should be helpful...

A Brief History of SQL Sentry

Back in 2004 when we released our first product, SQL Sentry Event Manager (EM), the SQL Server ecosystem was much simpler – most SQL Servers were running on dedicated physical servers inside a company's data center. Event Manager was purpose-built to provide a calendar-style UI for SQL Server Agent jobs, and to improve upon SQL Server's native alerting capabilities. Read more about how EM grew out of our Microsoft-focused hosting business here.

After a couple of years on the market, clients who were using home-built or 3rd party solutions for performance monitoring and tuning were regularly telling us that they needed something better. For years we too had rolled our own solutions for collecting performance data, heavy SQL, blocks, deadlocks, etc., and we understood the need all too well. So we packaged all of that technology and know-how into our second product, Performance Advisor (PA), which hit the market in 2008.

For the first time, users had key, actionable Windows and SQL Server metrics side-by-side down to a 10-second resolution, and easily correlatable with performance events like heavy SQL. If users purchased both Event Manager and Performance Advisor together (Power Suite), they received the unique and powerful capability of seeing those same performance events on the EM calendar, alongside jobs and other events.

About a year later, we introduced Performance Advisor for Analysis Services and Event Manager for Analysis Services (which actually was bundled in at no charge), as well as the BI Suite, which included licenses for PA and EM for both SQL Server and SSAS. This second set of PAs and EMs necessitated renaming the existing products as Performance Advisor for SQL Server and Event Manager for SQL Server respectively.

In 2011, we launched Performance Advisor v6 with the integrated version of Plan Explorer, which had been released as a standalone free tool a year earlier. It took longer to get it into PA because of all of the additional functionality, much of which we broke out in to Plan Explorer PRO a year later in 2012.

Also in 2012, we released Fragmentation Manager, which was not a standalone product, but rather our first add-on module for Performance Advisor. It remains the most robust enterprise solution for SQL Server defragmentation, with visual scheduling via the EM calendar, built-in alerting, parallel defrags, and great visualizations around fragmentation trending and index usage.

In 2013, due to popular request from customers wanting to monitor non-SQL machines, we removed the dependency of an active SQL Server instance, and released Performance Advisor for Windows and Event Manager for Windows. This added Windows Event Log monitoring and alerting, a new Processes module showing a breakdown of OS process activity for any point in time, grouped by application. Along with this came, you guessed it, another suite – Power Suite for Windows, which necessitated rebranding the original Power Suite to Power Suite for SQL Server. We also released the Power Suite Plus, which included PA for SQL, EM for SQL, PA for Windows, EM for Windows, and Fragmentation Manager.

From 2013 until 2015, we released a slew of enhancements to the existing product lineup, including AlwaysOn monitoring, intelligent alerting via customizable Advisory Conditions, performance baselines, cloud.sentryone.com for web and mobile access, and the first ever Power BI content pack for operational analytics.

The pace has only picked up over the past year, which saw us release four ground-breaking new products for monitoring Azure SQL Database, Azure SQL Data Warehouse, Microsoft APS, VMware, and Hyper-V.

Confused yet? You are not alone! Every item in bold above represents a distinct sku. Over time, the complexity of the ecosystem within which we work had increased dramatically, and so had our product lineup, to the point where it became a challenge to clearly articulate everything we do. With so many individual products and suite combinations, users could never be sure if they had the right tool for the problem at hand. Something had to change!

After struggling under the weight of this bloated lineup for too long, we finally arrived at the solution: SentryOne. As our new unified brand and platform, it more clearly reflects who we are today and the unique value that our products deliver. "How's that?" you may ask. It's probably easiest to jump right in with some visuals to help communicate the true impact of the changes –

This is our new unified flagship – five skus consolidated into one (six if you count the former Plan Explorer PRO, not shown here but fully integrated into the former PA for SQL Server): 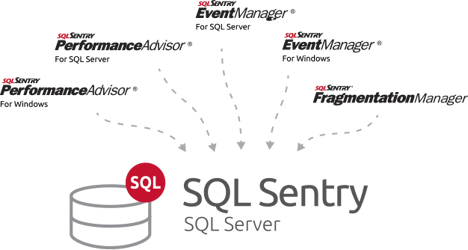 Four skus consolidated into one (EM for SSAS is not shown, as it was previously bundled): 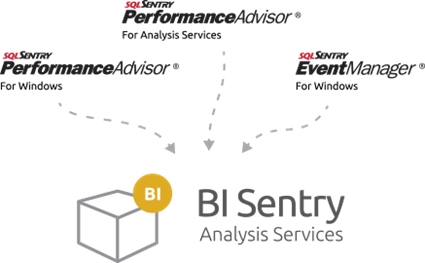 Two SKUs consolidated into one: 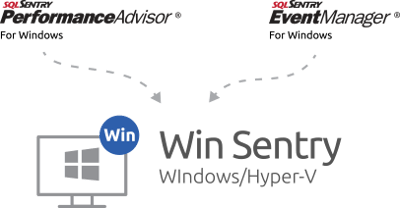 Here is the net result of the product unification and rebranding:

In addition to the reduced sprawl of the new lineup, SentryOne the platform is oriented towards reduced complexity and time-to-value. We are keeping the SQL Sentry version scheme going, so the new software is v11.

For new users, the setup wizard has been streamlined, making for a much simpler install. Additionally, 75+ Advisory Conditions are now pre-installed and activated – a separate download is no longer required. (Read more about this industry-leading intelligent alerting capability here and here.)

As a result, the new Environment Health Overview is front and center with the results of those condition evaluations as soon as you begin using SentryOne:

The Health Score is indicative of the overall state of the environment, and you can easily filter events to find the worst problems, then jump directly to the dashboard or calendar to troubleshoot, all without touching the Navigator pane.

We will be covering other new v11 features in future blog posts, and I'll keep a list here as they are published:

I couldn't be more excited about these changes and what they will mean to both our customers and our team – there will be increased efficiency and effectiveness all around! We are also now better positioned for what is to come. As always, we will continue to innovate, and will remain laser-focused on helping you get the most out of the Microsoft Data Platform.

Visit the rebrand overview page, and register for the webinar this Friday, where we will cover the changes in more detail and demo the new SentryOne platform: