I’ve been taking some spare time, which doesn’t come along very often, to record some of the details of PASS during its very first years of existence. In case you haven’t seen the earlier entries in this series, here they are:

In the History of PASS, Part 1: Foundation, I described how the money, the executive willpower, and the corporate support came together to set the wheels in motion.

In the History of PASS, Part 2: Board of Directors, I described how the original founding board of nine independent experts and community organizers came together as the first board of directors.

In this entry, I’ll tell you about the earliest iteration or two of our Bylaws, how they came to be, what they focused on, and the first couple rounds of changes that we made to them as a team.

Where to Start With Bylaws?

Creating the bylaws for a large professional associate out of whole cloth would have been outside of our skills as technologists. However, the association management company that was contracted to run our everyday affairs, SmithBucklin & Associates (SBA), had attorneys on staff to incorporate the organization and were actively managing all the other big database vendor user groups as well as quite a few other leading hardware and software vendors. Adding PASS wouldn’t be anything unusual for them. So, we felt very fortunate that to have access to a set of very compatible templates from the other DBMS user groups at our fingertips.

One of the first and foremost aspects of a professional association is that its intended purpose is not to enrich its owners since, in fact, the membership are the owners. Once you decide to create a corporate entity that is not intended to make a profit, you must make some hard choices about organization rules, lines of command and authority, and perhaps most importantly, revenue and taxation.

anization is perceived as a charity and thus reaps LOADS of tax benefits. If you’re a non-profit, in the eyes of the law (and the taxman) you’re in the same category as a church, university, or humanitarian organization like Goodwill. However, to qualify for that status as a professional association, you must represent the interests of many corporations in addition to the individual members. Although we went several rounds with the IRS arguing that we qualified, at the end of the day they said we only advanced the interests of Microsoft. So, we were relegated to not-for-profit status.

As an organizational construct, a not-for-profit does not have federal tax benefits since you’re taxed like any enterprise with a general ledger. However, it does have benefits in terms of simplified terms of ownership and, in the state of Illinois where we are incorporated, have special state-level benefits. We made the best of those limited benefits and got to work on the rest of PASS’s governance.

Sidebar: A recent proposed change to the bylaws suggested that additional vendor seats be made available, since CA no longer exercises their right to two board liaison seats. I personally think this is a great idea and, depending on the vendor, might present an opportunity to readdress non-profit status.

Although I’d like for everybody interested in PASS to read and keep up with the bylaws, I know that is like asking a kid to swallow a very nasty medicine. So, I’ll boil a few thought down to something a bit more consumable.

If you are feeling heroic, you can read the current version of the PASS Bylaws, but it does not contain any historical Bylaws. You can, however, read meeting minutes back to 2016.

First, I’ll point out a few of the key tenets of the bylaws, not so much to enable you to write your own bylaws but to point out how very different cultural expectations were in the late 1990s, a time when the internet was only static HTML webpages, a nice computer monitor weighed 35 pounds, and smartphones were still many years in the future: 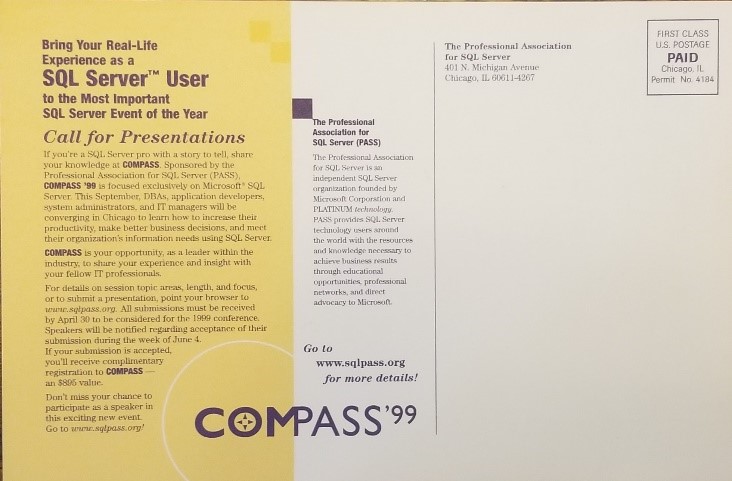 So, that’s just a quick recap of what was in the first round of PASS bylaws and governance documents.

In our next installment, I’ll describe a few problem situations for PASS in which we made changes to the bylaws and some of the early, but existential, crisis that we face and how we survived them.

Book a SentryOne Database Expert to Speak at Your Virtual Meeting
5 Great Tips on Working While Parenting During COVID-19
Join Me at These SQL Server Events in December 2019
Join Me at These Midwest SQL Server User Group Meetings, Oct. 8-11!
SQL Vacation DownUnder 2019!
Cross-Country Roadshows in the Nordics This Week!