As I promised in part 4 of this series on mining performance data, we're going to start digging into database objects that will let us mine current, and historical, performance data from the SQL Sentry database, starting with this post.

There are quite a few objects that store metadata or data concerning performance counters, so we'll start with some basic definitions, and work our way toward more useable queries along the way.

Since wait stats are generally a good starting point for troubleshooting performance, I'm going to tackle those first, so today we're going to learn about the various tables that provide information on wait statistics in the SQL Sentry database.

In order to understand performance data from SQL Sentry, some terms need to be explained. I'll be referring to these terms often, so it's best to get a clear understanding of them now.

In SQL Sentry, wait types are counters. They may also be grouped into classes or categories to make troubleshooting faster, so if I want to build a query involving waits, I'm going to need to understand the table that holds counters, as well as some tables that specifically expand on wait types. 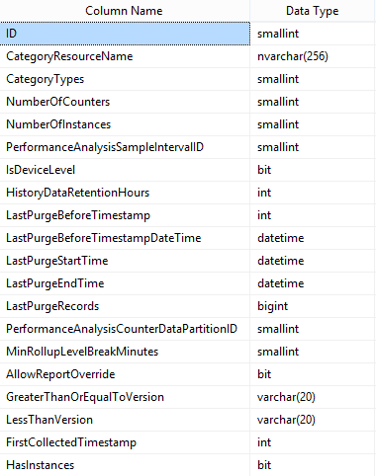 Here we're interested in CategoryResourceName, and ID. What about all that other stuff you say? I'll get to that another day, we have a lot to go over in this post, and most of it, while very interesting, is just not relevant to what we're doing here, so we're going to skip it for now. CategoryResourceName gets us our clean name from the next table, and ID is a foreign key in the counter table.

CounterResourceName lets us get the clean CounterName from the counter name table. PerformanceAnalysisCounterCategoryID is the foreign key back to the category table.

CounterResourceName joins back to the PerformanceAnalysisCounter table allowing us to use this table to get the clean name for counters, and CounterName is the actual clean name for the counter.

Next, we have some tables that define metadata specifically surrounding wait type counters. As previously stated, there are categories, classes and, of course, types.

Just a simple name and sort order for our wait categories. Table values include Disk, Memory, Network, and Other. CPU is not included in the table because all signal waits are considered to be CPU waits. We will have to handle this case in our query. Other waits are considered to be wait types that are not directly attributable to a single category.

Classes are normally viewed in the sample mode of Performance Advisor, or in reports, and are just a slightly more granular level than categories, but not as detailed as the raw wait types. They will usually be named closer to an actual subsystem like "Transaction Log" or "Latches: Buffer IO." 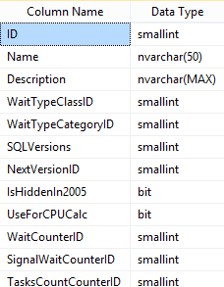 The previous tables provide the metadata we will need to build our wait statistics query, which will include average waits by server and class. We'll also get to see how the "CPU" category is a special case when we're working with wait statistics by including the percentage of signal waits, even though we're not using categories in our query.

SQL Sentry collects a lot of data. No really. It's a lot. If we held onto every bit of it, the repository would become unmanageable before long. In order to keep things useable, the system employs a self pruning process that rolls performance data up to a higher resolution as it ages. I'm not going to go into all of the intricacies of that system here, but I will explain the naming convention of the data tables, and how to tell what level of detail is in a given table.

As I mentioned briefly in the definitions area, understanding rollup levels starts with understanding the data stored in PerformanceAnalysisDataRollupLevel 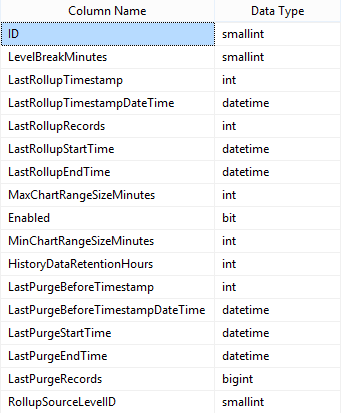 There are several important columns in this table.

ID is not only the key for the table, but it is also the suffix you will use as the name for the data table to go to once you determine the rollup level you want to use in your query.

LastRollupTimeStamp tells us how fresh that rollup level's data might currently be.

Enabled actually controls whether or not SQL Sentry is even using that rollup level. For instance, by default, the 5 minute rollup is not enabled. You can turn it on by setting Enabled to 1 in this table, and restarting your SQL Sentry services. By performing this one action, you will cause SQL Sentry to generate performance data for you at a 5 minute resolution for your own reporting purposes.

HistoryDataRetentionHours states how long we're going to keep that rollup level data for. After this amount of time is exceeded, the data is purged. Adjusting this is possible, but you must remember that increasing it directly impacts storage requirements, and quite possibly performance.

Most of the rest of the columns are used for internal purposes, or for the SQL Sentry client. 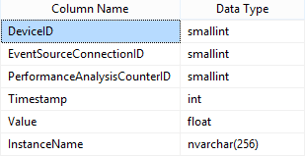 We probably recognize DeviceID and EventSourceConnectionID from earlier posts.

Timestamp is the Timestamp value discussed in definitions above.

Value is self explanatory.

InstanceName is the instance name for the counter, as I'm sure you're all aware performance counters can have multiple instances.

Now, here is where this gets interesting. When we want to get some nice juicy historical data, we know it may have been purged. Let's say we want something from 30 days ago. Ok, so 30 * 24 == 720. The first "Enabled" rollup level with a retention higher than 720 is 8. So, the way this works is that, to guarantee I can get my 30 days worth of data I need to query against the table called "PerformanceAnalysisDataRollup8." 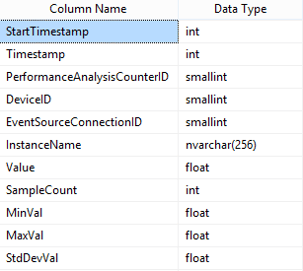 This table is similar to the basic data table, but you may notice that it has some other values in it that we can use like the Min, Max, Avg, and StdDev. These columns let us know a little more about the rolled up value since we've lost a bit of detail in the rollup.

As I briefly mentioned above, at the detail level, disk counter data is separate from other data. In the rollup tables they are, merged into a single table making rollup tables good for reporting purposes.

PUTTING IT ALL TOGETHER

Finally, we can take most of what we've been over here, and put it into a query that will tell us a bit about our environment.

In this query, I want classes per instance, for every SQL Server instance in my environment. In addition, I want to know what percentage of the waits are resource waits, and what percentage are CPU (signal) waits. I want to get this information for the 2 minute rollup level.

Here is what I came up with using the tables above:

I used a couple of CTEs here, and an ugly join or two to get what I wanted quickly, but it certainly gets the job done. I've also done a little cleanup where the signal waits don't always apply turning the null values into 0s, just because I thought it looks better, but not really an absolute need.

Here are some of my results:

I promise the next part of this series will be a bit shorter. Now that we know how to use these counter and data tables, we can get into some more interesting things, and we'll start by building a pivot query for server resource metrics in Part 6!