A Historical Account of the Professional Association of SQL Server (PASS), Part 1: Foundation

A Historical Account of the Professional Association of SQL Server (PASS)

Lately, I've been asked many questions about the history and foundation of PASS. As an "old-timer", I like to think it's my prerogative to wax poetic about the old days. But it's also important to be able to answer those questions asynchronously and in a long-lasting format.

So read on to learn about how PASS started, various structural and organizational changes, and some major issues PASS faced during my years as a board member from 1999 to conclusion of my service at the end of 2009. (Shout-out to long-time PASS speaker and volunteer, Jessica Moss, for assisting in the transcription of this account from its original verbal form).

PASS started as the brainchild of Flip Filipowski, owner of Chicago-based database tools company Platinum Technologies, Inc. Platinum made tools for many database platformsof that era including Oracle, DB2, and Sybase. Flip was a big supporter of user groups and professional associations in those days, seeing it as a means of coalescing communities in a way that is beneficial to software vendors but also a means of doing well by doing good.

In fact, at that time, Platinum had been instrumental in the founding of professional associations for DB2 (IDUG), Sybase (ISUG), and others. Flip commissioned one of his executives, Steve Vandor, to investigate. Steve investigations revealed that there was indeed interest in at least a large USA-centric SQL Server community if not a worldwide one. He then reached out to Microsoft and convinced the executive management of the SQL Server business unit to help found an international user group for SQL Server. Each company put $125,000 down to launch this new group.

With money in hand, Steve then went to the leading professional association management company SmithBucklin (also based in Chicago). SmithBucklin was the association management company of the other international database associations as well as other massive professional associates for IBM (SHARE) and HP (EDGE?). Steve worked with SmithBucklin's Executive Director Carol McGury to begin the process of creating an initial set of bylaws based on precedent while concurrently working with Microsoft to draw up a list of community leaders who might serve as the founding directors of the board.

For a monthly fee, they kept the books, did the accounting, processed the legal paperwork (including all of the legal incorporation documents), conducted banking on our behalf, filed our documentation for the IRS and other legal entities, and hired a team of staff to manage the backoffice functions from soup to nuts. (This strict reliance on SmithBucklin laid the seeds of some of our earliest board-level conflicts, primarily because SmithBucklin at that time only supported websites running Oracle and ColdFusion. It was a point of significant angst among many board members that a prospect might visit our website and somehow encounter an Oracle error message for whatever reason).

Under this structure, PASS was comparable to an organization like the American Medical Association (AMA) or the Modern Language Association (MLA). Under this mode of operation, PASS is a so-called "learned society" which is an organisation that exists to promote an academic discipline, profession, or a group of related disciplines and to promote the "state of the art".

Membership in such communities may be open to all, may require possession of some qualification, or may be an honour conferred by election. The official activities of a learned society typically include holding regular conferences for the presentation and discussion of new research results and publishing or sponsoring academic and professional journals in their discipline. Some also act as professional bodies, regulating the activities of their members in the public interest or the collective interest of the membership. 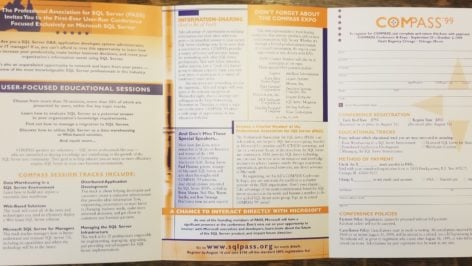 I mention this specifically because I've been asked by many social entrepreneurs about how to start their own big community. Ideally, you want non-profit status when creating a big professional association for its much better taxation status. However, the IRS will not allow non-profit status if your status is in support of a single product vendor. So if you're considering starting your own association of some kind, think about ways that you can expand the remit of the organization to include multiple vendors.

Even so, that does NOT mean that the IRS will grant you non-profit status. But it will help significantly. (Standard legalese follows. I am not a lawyer and do not pretend to offer legal advice. Check with a legal professional if this pursuit is something you're thinking about).

It's easily possible that some of you reading this article are younger than PASS itself. So here's an amusing bit of trivia. Back in those days, we had an Internet but it was not yet THE INTERNET you know, love, and are addicted to today. Search engines were not a thing, the closest being directories like Yahoo.

SEO wasn't a widespread concept yet, with Google's IPO not due to arrive until 2004. Online shopping in its current form was still unknown, with the best the Internet could offer in the '90s being online versions of paper catalogs. Consequently, you still had to do backbreaking, papercut-inflicting, dusty-library searches for things like patents, trademarks, academic and professional journals, and ...um... names for international profession associations. Mistakes were made.

Yes, friends, you guessed it. Our first articles of incorporation and even our first conference rolled out the door with a name that was already owned by another entitle. Good thing we knew how to do a rollback! Fortunately, the entity which owned the trademark and copywrite for "Compass" was mollified by our contrition and willingness to step off of their property.

Coming Next - Assembling the Team

In the next post, I'll describe how the initial group of nine independent SQL Server professionals came together to form the first board of directors and some of the interesting issues that faced that first group of leaders.

I hope you enjoyed this first installment in a multi-part series. Let me know if you have any questions specifically about the early days of PASS and I will either respond directly in the comments or write additional posts as addendums to the series.

If you haven’t already, please connect with me online!