History of PASS, Part 2: Assembling the Original Board of Directors

Way back in the waning of the 1990s, I was the lead DBA for SQL Server at the Practice Service Center for Deloitte in the suburbs just east of Nashville, Tennessee. We were one of Microsoft's largest SQL Server shops back in those days and I was privileged to get to work frequently with Microsoft people like Mark Sousa, who today is a corporate VP in the Microsoft Data Platform division. I was also author of four database books by that time (1 Oracle title, 2 SQL Server titles, and SQL in a Nutshell) and had written quite a few articles for the only SQL Server publication of that era, the SQL Server Newsletter published by Karen Watterson.

My friend and co-author for the book Transact-SQL Programming, Andrew Zanevsky, sent me an email asking if I'd like to join the first Board of Directors (BoD) for the newly forming international Professional Association for SQL Server. Andrew himself was inducted onto the BoD because of his great writing skills (in fact, they were what got his first introduction to SmithBucklin through his editor Karen Watterson), his SQL Server technical chops, and because he was the leader of the then Great Lakes SQL Server user group serving the Chicago-land area where the association managment company SmithBucklin (SBA, at that time) was headquartered and where the first conference was to take place. 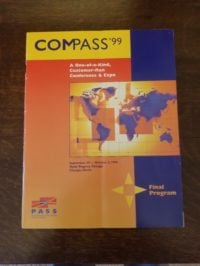 The Cover of the First PASS Summit event program


Andrew mentioned a couple circumstances that contributed to me being invited. First, the BoD was overbalanced towards consultants and writers but needed more enterprise IT membership. Second, even among those willing to take a seat on the BoD, few wanted one of the positions on the Executive Council because they had to work. a. lot. I, however, was both dumb and bribable enough to say "You mean I get to go to the conference for free? I AM IN!" So, I took the position of Vice President of Marketing on that first BoD having almost no direct marketing experience and, in fact, little more than a couple marketing classes in college. After all, SBA had a talented staff to do all of that hard work for us, right?

Most people that were selected were either well known in another major IT association like IOUG or SHARE, or were well known in the SQL Server world as authors.

The initial BoD was comprised of the following people:

(Side-bar: this BoD was assembled primarily through people who had networked extensively and were extroverted enough to introduce themselves to each other in a time before blogs, social media, or widespread community-organized get-togethers. If you're looking for any lessons as to their career success, consider that almost everyone in this group is a good writer and communicator. If you're wondering how to invest some free time improving your skills as a technologies, believe it or not, you might want to focus on writing and speaking skills until you attain at least a moderate level of skill).

The PASS BoD then met in monthly conference calls to discuss the initial structure and charter of the organization. Some milestones were set. Such as, that they needed to write the bylaws of the goals and how it would be governed. Basically, all we knew for sure was that we were going to put on a conference, that it was a not-for-profit organization with a mission to train and share, and that we were going to figure the rest out as we went along.

As I mentioned in the first article of this series, Platinum Technologies (and later, CA) was motivated to help coalesce a weighty market of SQL Server users whom they could sell to, as well as to help drive professionism and training opportunities to the SQL Server market. Microsoft's motivations, however, were a bit different and took me a while to suss out. After all, everyone attending a PASS Summit was already a customer. They didn't have to sell to them anymore. So what would motivate Microsoft to spend money and talent on this endeavor? To answer that question, first consider the times. Microsoft was doing well in the 1990's and faced only one major competitive threat on the desktop - Linux. And Linux was empowered and championed by a huge community of open-source programmers and administrators. Microsoft decided that they needed a counterweight to the OSS community and, in order to have any credibility in this space, it needed to be not-for-profit.

In addition, SQL Server was considered a lightweight, departmental database throughout the early 1990s. They wanted to erase that impression and wanted compete with the relational database big boys (Oracle, Sybase, and IBM DB2) who all ran on Unix hardware. So, they first took a lesson from those companies, who funded large professional associations of their own. They also learned from their own efforts in moving Exchange to a market-leading position over Lotus and Novell email products through the MEC, Microsoft Exchange Conference, where they were getting three to four thousand attendees each year. Microsoft was certain that the same could be done for SQL Server. The idea was, if we can help a community of thousands of SQL Server professionals to come together, the amount of help they provide as champions of SQL Server will return many times more on the investment. It was a gamble, but one they felt worth taking.

In Part 3 of the series, I'll tell you about early governance structure, bylaws, and how the BoD worked.

Got questions you want answered? Drop me an email or enter a comment!