PASS is a big, multi-million dollar, not-for-profit organization. As a not-for-profit, the organization's bylaws require public financial reviews for the benefit of the association membership. Everyone who has ever been to PASS Summit knows that this obligatory review is a requirement (and a typically boring boilerplate) for every not-for-profit organization. Let me just say that this was the MOST FUN of any financial presentation in the history of ever! Wendy didn't speak to the financial slides, she sang to them to the tune of "I Will Survive." It was outstanding and everyone enjoyed it! Here is a video of the performance.

The event continues to attract new attendees, with more than 40% of registrants being first-timers this year. Tim told several stories from his background and how PASS has literally transformed his career and his life experiences. Membership growth around the world continues to expand significantly, especially in Latin American (LATAM), with more than 140% growth in the past year.

25 Years of SQL Server with Mark Souza and Company

Personally, this was a golden moment. As one of the earliest leaders of PASS and as a user of SQL Server since its inception, I was thrilled to see ALL the leaders of Microsoft's SQL Server team on the stage with Mark—Ron Soukup (1989-1995), Paul Flessner (1995-2005), Ted Kummert (2005-2014), and Rohan Kumar (current). I hear Springsteen's "Glory Days" playing in my head! 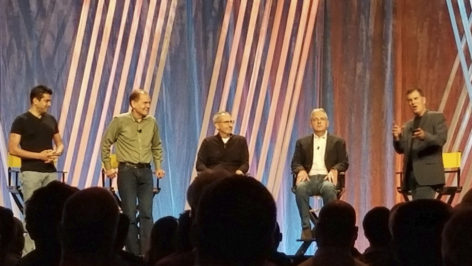 This is a discussion I encourage everyone to watch from start to finish on PASStv. In fact, it's so good that I'm not going to provide a TL;DR here. If you care about SQL Server, you should watch it—'nuff said. However, one repeated theme, which I think is worth reiterating as a life message, was "Don't keep doing what all the others in your space are doing. Do things differently. Where everyone goes, go somewhere else."

Two Decades of Data Innovation: Celebrate the Evolution of the Data Platform and See into the Future with Extreme Cloud-Based Data Solutions

Twenty years of PASS Summit and twenty-five years of SQL Server; together, we’ve come a very long way. Join the SQL Server team past and present as they take a journey through the evolution of the Microsoft data platform into the broad ecosystem you see today.

You'll hear from many of your familiar friends: Conor Cunningham, Bob Ward, Lara Rubbelke, Mark Souza, and a few other surprises. Then, buckle up for a deep dive with Microsoft Data Platform CTO Raghu Ramakrishnan on the internals of the next evolution in engine architecture, which will form the foundation for the next 25 years of the Microsoft data platform. No matter how you interact with data, be the first to look under the hood and see the future of data straight from the Azure Data engineering team.

Raghu's presentation took us through early design concepts for databases, data warehouses, and data lakes. From there, he took us through many additional database design concepts, such as database-centric cloud computing, with a decent amount of time spent on the new Azure SQL Database Hyperscale SKU. Hyperscale, codenamed Project Socrates, is extremely powerful and nearly limitless in size, with extremely low latencies.

Themes to watch for achieving Hyperscale: