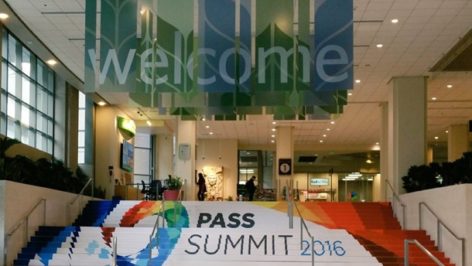 Day One Keynote with Joseph Sirosh

Adam Jorgensen, PASS President, welcomed the PASS community to the Seattle, introducing a number of exciting opportunities we are facing as we shift mere data storage to intelligent platforms. As a professional association, Adam's time on stage is as much about keeping the community apprised of the business of an association as it is about data engineering. One of my favorite parts of Adam's time on stage was the awarding of the PASSion award.

This year's winner is my personal friend, Malathi Mahadevan, the PASS regional mentor NE region, as Volunteer of the Year and PASSion Award recipient. Mala has been working hard for the SQL Server community as long as I've known her. She lives in Louisville, KY and led the local user group and SQL Saturday for many years, in addition to actively mentoring many new and up-and-coming user group leaders and volunteers. Congratulations Mala!

The PASS Summit 2016 keynote featured Joseph Sirosh, CVP, Data Group, Microsoft. I strongly encourage you to watch his keynote on PASStv. He brought on so many guest speakers doing interesting and brilliant things that it's really hard to recapture the value of those vignettes in a brief blog post. Just a few highlights...

Joseph introduced the concept of A.C.I.D Intelligence: Algorithms, the Cloud, the IoT, and Data – a confluence of AI, sensors, and algorithms. By bringing data into the cloud, you can integrate all of the information, apply Machine Learning (ML) and AI on top of that, and deliver apps that are continuously learning and evolving in the cloud. This enables the the cloud to become the brains of a connected planet. Lately, Microsoft’s goal is to infuse intelligence into each of their software products, from development platforms to apps like Office 365, and to “sprinkle the pixie dust of machine learning into SQL Server.”

The goal is to “maximize the predictive value of data that lives in the database.” Intelligence and data are brought together seamlessly by pushing intelligence to where the data is, by moving the analytical model into the DB tier. With the integration of SQL DB and R, intelligence can be shared with various applications instead of being locked up in one app, enabling incredible speed.

The Three Patterns of Data and Intelligence

Joseph outlined three patterns in which data and intelligence are brought together seamlessly: Intelligent DB, Intelligent Lake, and Deep Intelligence:

SQL Server 2016 is an unrivaled platform for data-driven intelligence, deeply integrating the power of R with SQL DB to deliver incredible parallelism and speed. SQL Server 2016 can be on-premises, on the cloud, or on LINUX (scheduled for release in 2017).

A real-life example of fraud detection in a transactional database using ML on SQL Server 2016 delivered one million predictions per second. Similarly, loan default predictions were scored at the rate of 20M loans in 15 seconds (1,300,000+ loans/sec) using built-in R functionality.

THE TOP 5 ANNOUNCEMENTS FROM

How can we extend intelligence? By scaling out the HTAP solution. To this end, PolyBase connects to all popular data platforms (e.g., Hadoop, Teradata, MongoDB) in HTAP solutions for SQL Server 2016, pushing down queries to the data source. (This demo was so good).

Rohan demonstrated how SQL Server can run on Linux with the simple restoration of a Windows-sourced DB to Linux on SQL Server. Sirosh noted, "We just doubled the number of platforms SQL Server runs on!"

Azure SQL Data Warehouse is a game changing, parallel processing, scale-out data warehouse solution in the cloud. (And something we monitor quite well). Check out the exclusive one-month free trial – but be sure to enter the code SQLPASSROCKS to start today.

As an aside, something I found intriguing was Database Experimentation Assistant (DEA), a new A/B testing solution for use when uprading SQL Server. You can use DEA to conduct experiments on database workloads across two versions of SQL Server. This is great when upgrading from older SQL Server versions (starting 2005 and above) to a new version of SQL Server visualizing key performance insights from real world workloads. This gives you strong confidence about upgrades and further enables risk-free migrations.

“The intelligent revolution has begun.”

I've spent a lot of time reporting on and talking about all of these new developments within the Microsoft data platform in my column at Database Trends and Applications Magazine called SQL Server Drill Down. And I keep highlighting how important these new development and features are for traditional DBAs and data engineers. You need to learn these thoroughly and stay up to date!

Not only do these features provide new capabilities to your organization, they also require learning on your part so that you can properly recommended the right feature for the right job. Naturally, you need to know the benefits and drawbacks to each of the different products within the Microsoft Data Platform. For example, do you know when and where Azure DocumentDB is a better choice than the standard SQL Server relational engine? You should, for your career's sake.

In other words, DBAs who are trusted and valued by their organizations will be asked to act as solution architects in addition to DBA. Are you ready?

I hope you enjoyed this recap and look forward to your feedback. Cheers!
-Kevin