The Tech Outbound learning event will be fun. The brand new NCL Bliss departs from Seattle, WA with stops in Alaska cities of Ketchikan, Juneau, and Skagway. We'll train on a variety of topics while watching glaciers and snow-peaked mountains pass outside our classroom windows. And when we're not in class, we'll be enjoying all of the activities at our ports of call. What will you do - a glacier tour? Bear sightings? Or a leisure day of shopping and exploring? We'll spend two days passing through the majestic Inside Passage, and a final stop in Victoria on Vancouver Island, one of my favorite places on this itinerary. Learn while at sea! Network, explore, and relax in the evenings and at our ports of call. So much learning and so much fun are close at hand! 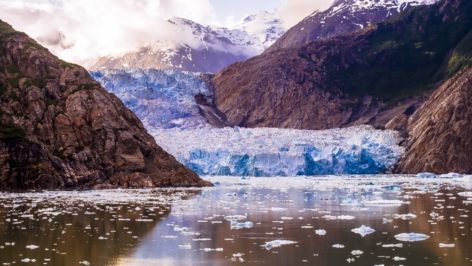 Glaciers of the Inside Passage

WILL I BE #BEARDED OR #BEARDLESS?

My good friend Jason Hall, VP of Product here at SentryOne, has put me to the test. Jason has set some tough weight-loss goals for himself. But he wanted to up the stakes, both in terms of accountability and a bit of social media fun. How, you ask? To quote from his blog:

If I can somehow exceed the 56 pound goal, and get to 60 pounds, everyone at Tech Outbound in August will be greeted by a beardless Kevin Kline. That's right. Just 4 pounds over the goal, and both me and Kevin will be shaving our beards for the event.

In case you were wondering, I was still in my 20's when I decided to ditch the clean-shaven look. Here's a picture of me around Thanksgiving 1994, the last time I kept a clean-shaven face. (Aside: this is evidence that my beard was NOT the result of my hair falling off my scalp and taking root on my face. Naysayers, beware! The goatee came first, then the full beard. Then the bald <sob sob>).

Now to make it a little more fun, and to give me at least a glimmer of a chance of getting out of Jason's shearing, I'll up the ante yet again. Let's add an hurdle of social media challenge to the Ozzy-style sheep shearing that Jason has planned for me.

I need 40 social media amplifications, either Twitter, Facebook, LinkedIn, comments on my blog, etc. mentioning #TechOutbound and/or #SQLCruise with either a vote for #Bearded or #Beardless. If 40 of you call for the equivalent of "Off with his head!!!", the beard comes off! What say you?

Stay tuned as we build our offerings for this event. Expected topics include but are not limited to: R, Data Science Fundamentals, Intelligent Apps, SQL on Linux, Security, Performance Tuning, PowerShell, Python, DevOps, T-SQL Coding for Application Developers, Big Data, and more.

The speaker line-up for this year's Tech Outbound Alaska SQL Cruise is essentially the best that the industry has to offer:

Will you join us? I hope you will!Let's connect on social media. Details below. Cheers!