I've had the opportunity to present my session on statistics at a few SQL Saturdays so far. I've found that there are more than a few people who are either unaware or unsure how statistics are used by the query optimizer, so I thought that I'd write a few of blog posts explaining what statistics are and how they're used.

If you've ever looked at an execution plan, you've seen statistics at work. They may or not be good stats, but they're there.

The value for estimated rows is based on the statistics provided to the Query Optimizer prior to runtime. That row count (or cardinality) helps the query optimizer to make decisions both about what query operators to use as well as choosing the 'best' plan overall. If statistics don't exist, then the Query Optimizer makes guesses based on the total row count of the table and has to make assumptions about distribution. As you can imagine, that doesn't always work out well. In the case of the query above, there were statistics, but they weren't accurate.

So what are statistics anyway?

Statistics contain information about the distribution of values within a column. If I were querying an employee table by last name, statistics would indicate how many distinct last names existed and the count for each of those last names. 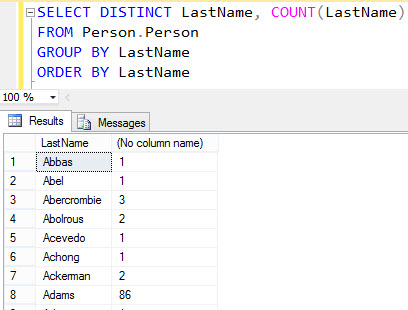 Now, depending on the number of distinct values, that count might be derived, but more on that in part 2. This information helps the Query Optimizer (QO from now on) make educated decisions on how best to retrieve data. One of the most obvious decisions is whether to use an index scan or an index seek. I use this as an analogy - if someone gave me a book and asked me to circle each instance of the word 'and', it might be easiest to go through every page in the book (index scan). Now if they gave me the same book and asked me to circle each instance of the word 'giraffe', I'd probably go to the index and see if and whether it existed in that book (index seek). There are other decisions that are based on statistics - whether the QO should consider parallel plans and which tables would be the outer/inner table in a nested join to name a few.

How are statistics created?

There are a few different ways that statistics can be created.

In my next post, I'll talk about how to view stats and the statistics object (how the Query Optimizer finds those estimated row counts).