The Years of Speaking Technically

I was trying to tie this to "The Year of Living Dangerously" but, well...

On June 13th, I presented two sessions at SQL Saturday Houston #408. It was important (to me), because it was the first time I'd presented two sessions, and because it finished off my second year of speaking at SQL Saturdays. For those of you who have just started speaking at technical events, and for those who want to but haven't yet, this blog is for you.

For most of my adult life, I've spoken publicly. I majored in Communications at the University of Arizona and I was in leadership for a community service organization for about ten years. I also spent a couple of years teaching Computer Science at our community college here in Tucson. I think that the largest group that I've spoken in front of was about 750 people. Not enormous, but large enough to think twice about. I've spoken through translators (fun fact - sarcasm does not translate well) and I've given emotionally tough presentations that ended up with most of the audience in tears. None of that scared me as much as speaking at that first SQL Saturday.

I had been thinking about presenting for the last five years or so, but coming on board with SQL Sentry seemed to be the tipping point. Our company likes to give back to the SQL Server community and speaking at SQL Saturdays is one great way to do that. Working with people who had been presenting for years gave me a great opportunity for advice. To be honest though, that's part of what was terrifying. How in the world could I ever measure up to an Aaron Bertrand (b|t) or Kevin Kline (b|t)? What could I speak about that hasn't already been covered by someone with more knowledge and experience? What do I do with the inevitable question that I can't answer? While teaching, I had time to build a rapport with my students and if there was a question I didn't know the answer to, I could get back to them during the next class. I could build up my credibility during the semester. A SQL Saturday is one day - one session during one day - in front of people who probably don't know anything about me other than what I put on my bio slide. 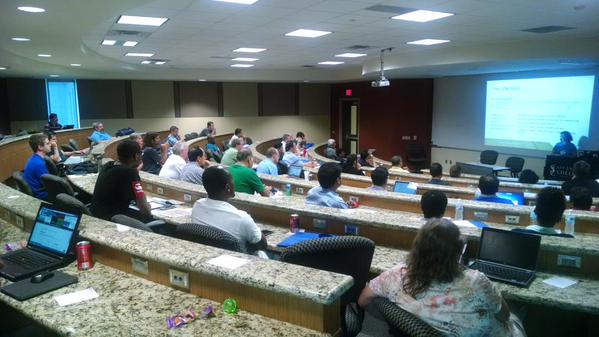 Throwing caution to the wind, though, I put together an abstract and submitted to SQL Saturday Albuquerque in 2014. Amazingly enough, I was accepted to speak. It didn't go perfectly, but it went well enough that I was encouraged to continue. As of now, I've presented at seven SQL Saturdays during the past two years and haven't been pulled out of a presentation yet. So, what have I learned?

And while you're speaking:

Keep in mind that this is a process. While you will get more comfortable presenting in front of people, you'll (hopefully) always be creating new content. Each time though, you'll be getting better at putting together sessions that will be both interesting and informative. While I was definitely nervous at the beginning, speaking at these events has actually become something that I look forward to.