Are You a Data Professional? It Pays to Stay Home!

I played with the results last year in my 2017 post titled, "When Does It Pay for a DBA to Have an Associate Degree?" - which was a fun post to write. This year, much of the twitter conversation focused on a gender gap in the results (see "Female DBAs Make Less Money. Why?").

I decided to look at median salaries by job title and gender (male vs. female) over years of experience with the database (perhaps in different roles). I filtered my report down to results from the United States, the private business sector, full time employees (including the "at contracting company" responses), Job Titles with more than 50 results, a salary between $15,000 and $200,000 (based mostly on info from "Practicing Statistics: Female DBAs and Salary"), survey year 2018, and a primary database of Microsoft SQL Server. This removed some variance in comparisons and focused on what I think was the largest group of responses; full-time private sector employees in the United States.

I broke the results into segments with "years of experience with Microsoft SQL Server database" in the following manner:

*SeniorPlus as opposed to Elderly. ;-) I almost put Expert, but time doesn't necessarily make one an expert. My labels aren't important, anyway. They probably weren't even necessary.

Many of these comparisons are less than great because so few females responded. I would have loved to include nonbinary responses, but there were too few for this comparison. Many of the salaries for females are based on 1-3 responses per job title, per experience level. Much of my commentary is speculation. The analysis is mostly for "well, that's interesting" types of discussion. The overall median salaries for females are lower than the salaries for males in each level of experience that I have highlighted. Based on analysis from others, I don't see any one data point that explains this.

The color saturation is by number of results, showing that DBA General was the most popular response for both genders (47 males and 11 females). Females actually show a bit of an edge here, with their $80K compared to $75K. Then there's that lone female App Developer who negotiated a salary better than the median of 19 male App Developers. Maybe. Either way, she's off to a great start! Architects and Managers are making good "beginner" money as well, but no females are represented in those roles at this level in the survey. 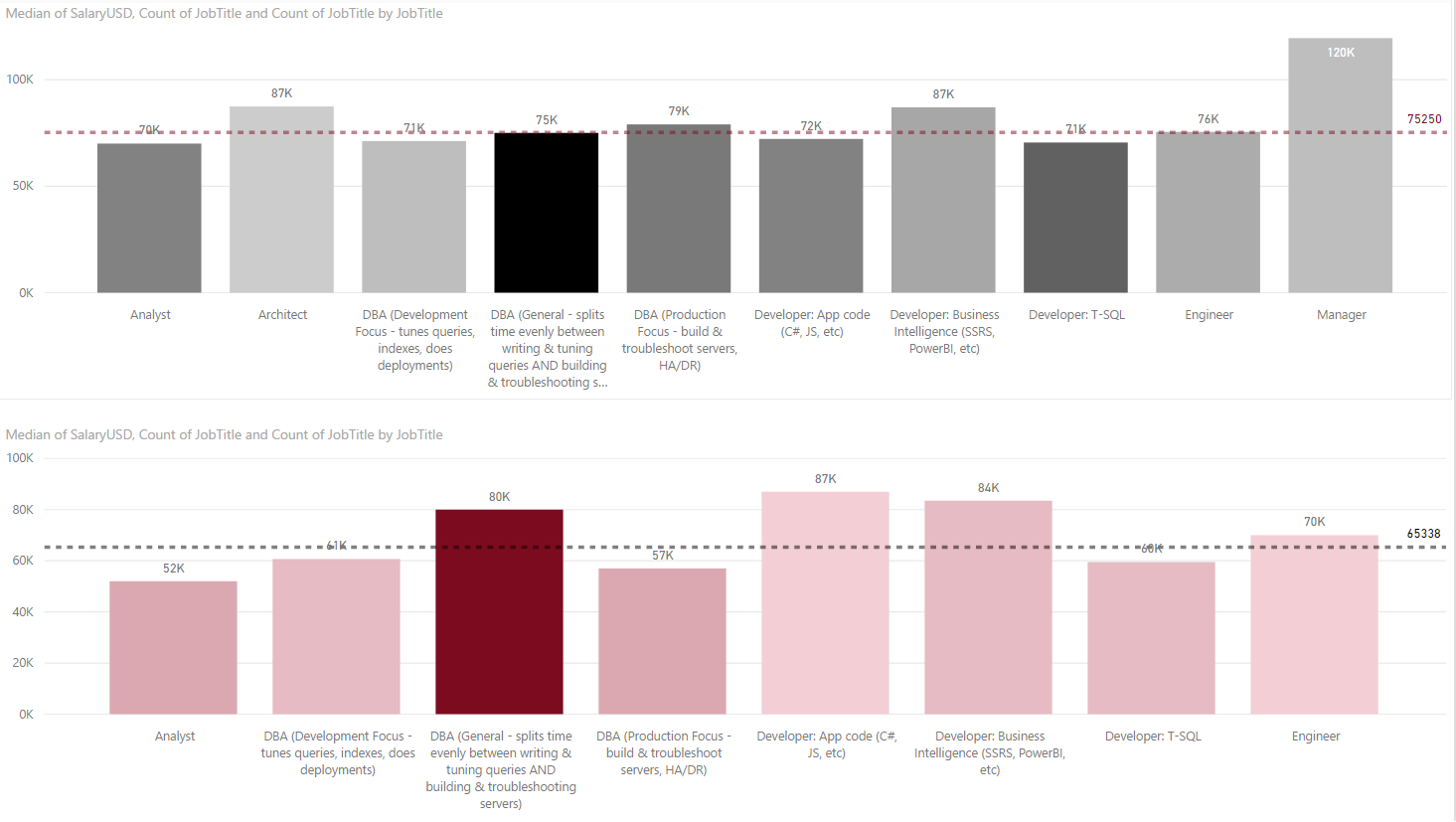 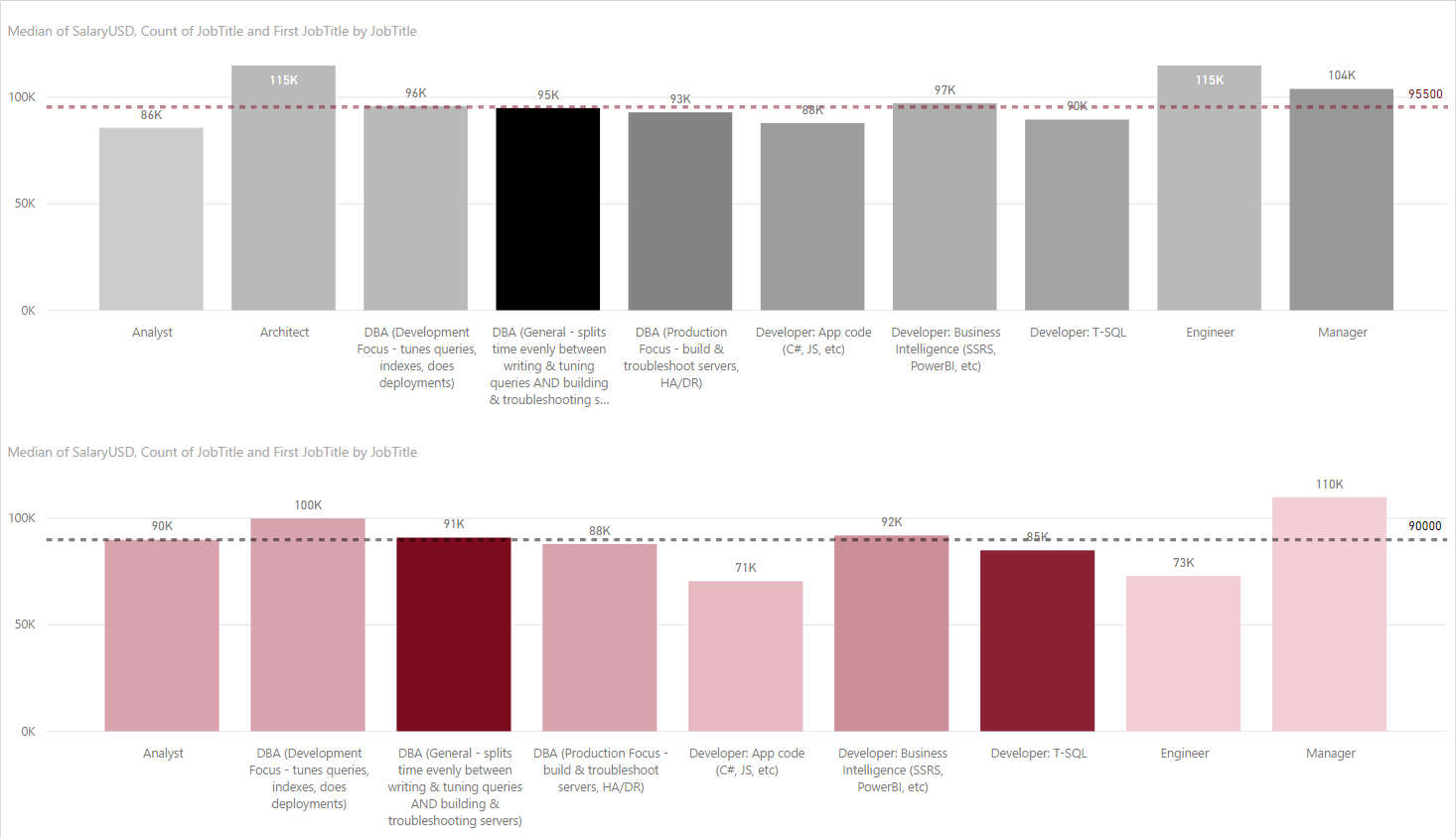 This is the first level where each job title is represented for both genders. Female DBAs still seem to do better when they aren't Production DBAs in this sample. 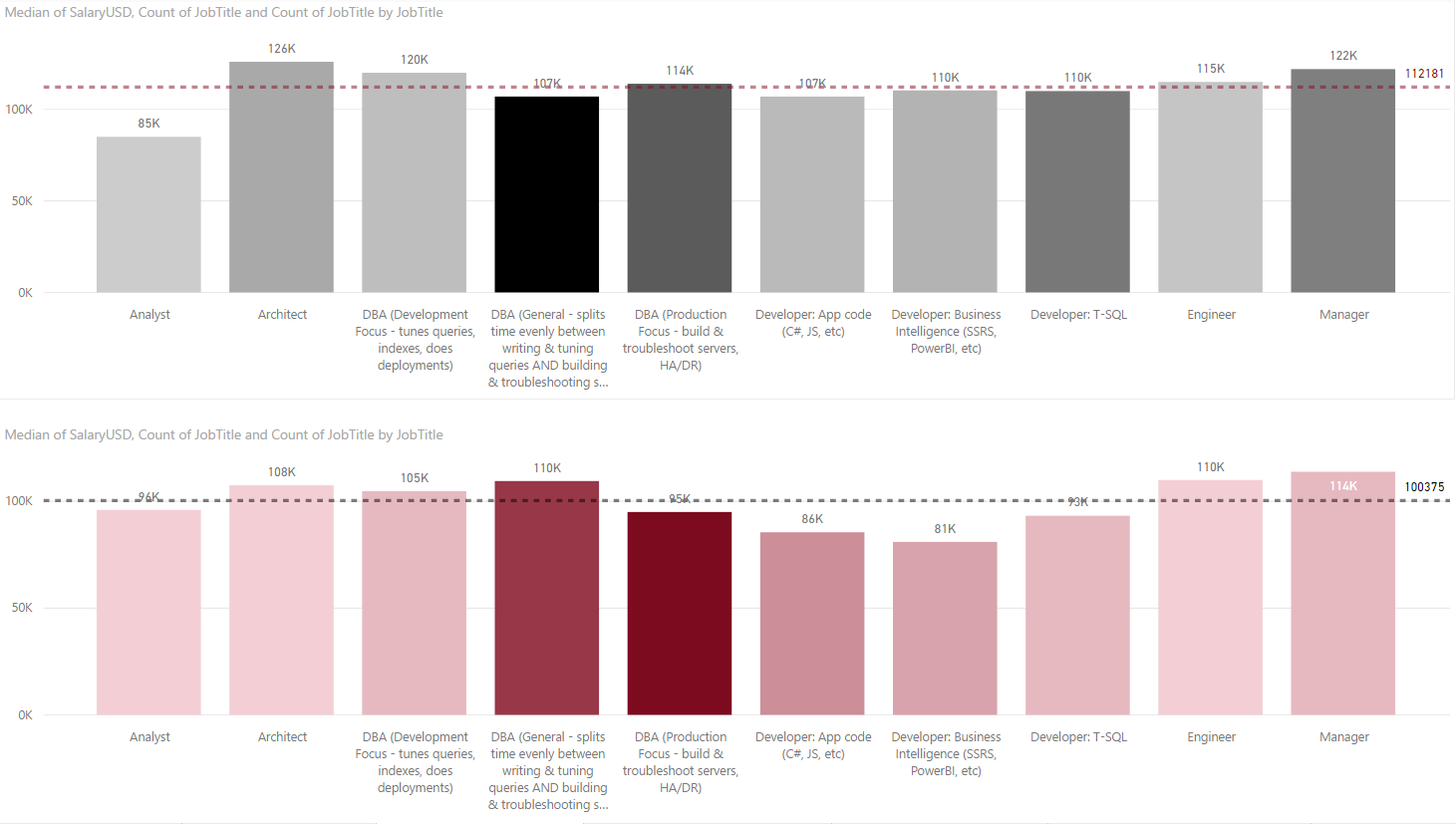 There are 3 female DBAs in Development (compared to the 36 males), and they have an impressive lead in the median salaries. A handful of Engineers are doing well, but female Architects, T-SQL Developers, and Managers are showing a large pay difference. 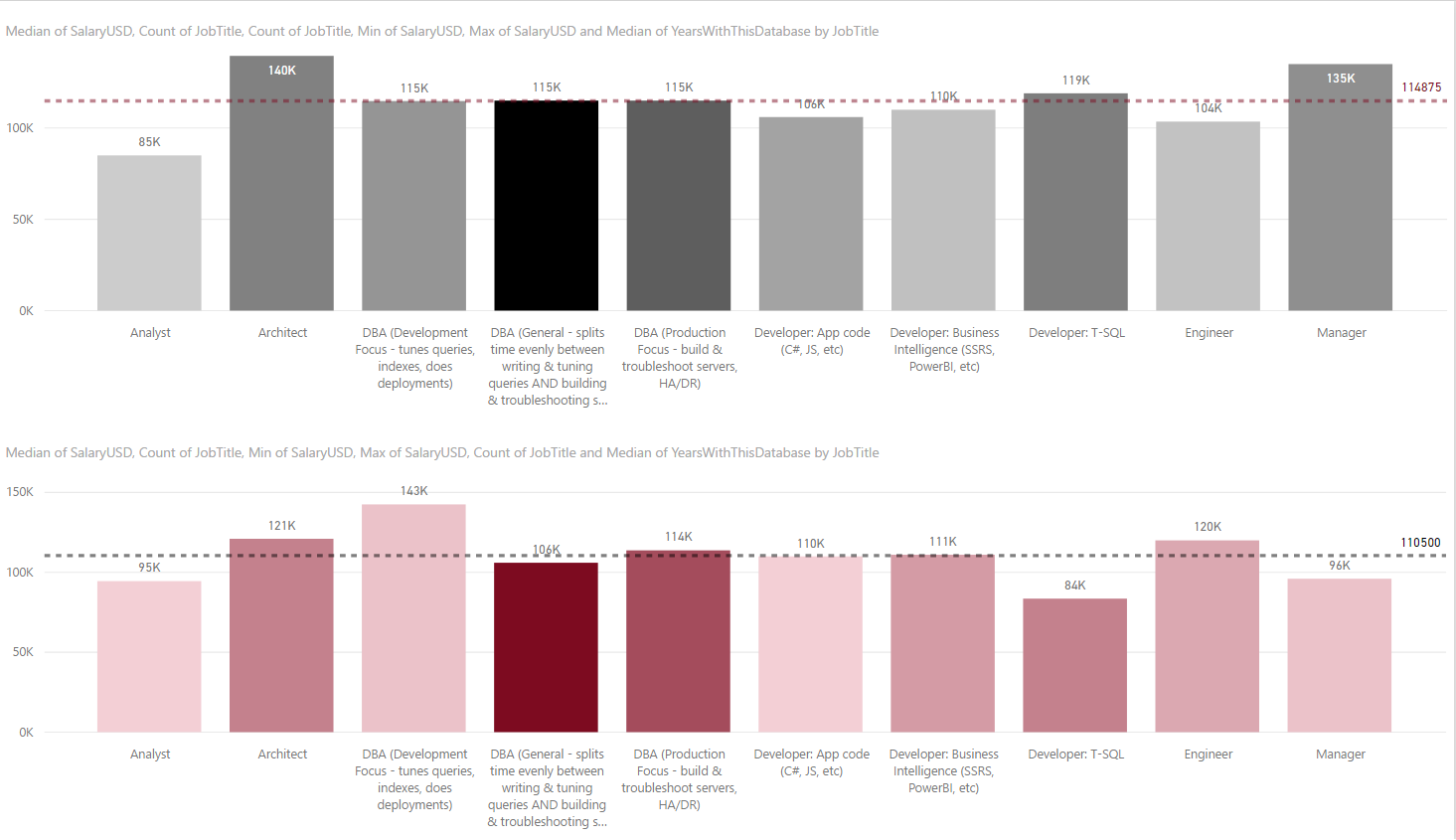 These employees with a lifetime of Microsoft SQL Server experience show a median salary of $122,875 for males and $107,000 for females. Note that the overall median salary for females is now lower in this group.

All of the job titles have 1-3 responses for females in this group, and 1-20 per title for males, with half being fewer than 5 individuals represented per job title.

The overall median salary difference is greater than $15K, but no females are represented in some of the higher paying jobs at this level, such as Architect. There's a lone App Code Developer and Engineer, each making significantly less than the median salary for males in this experience group. 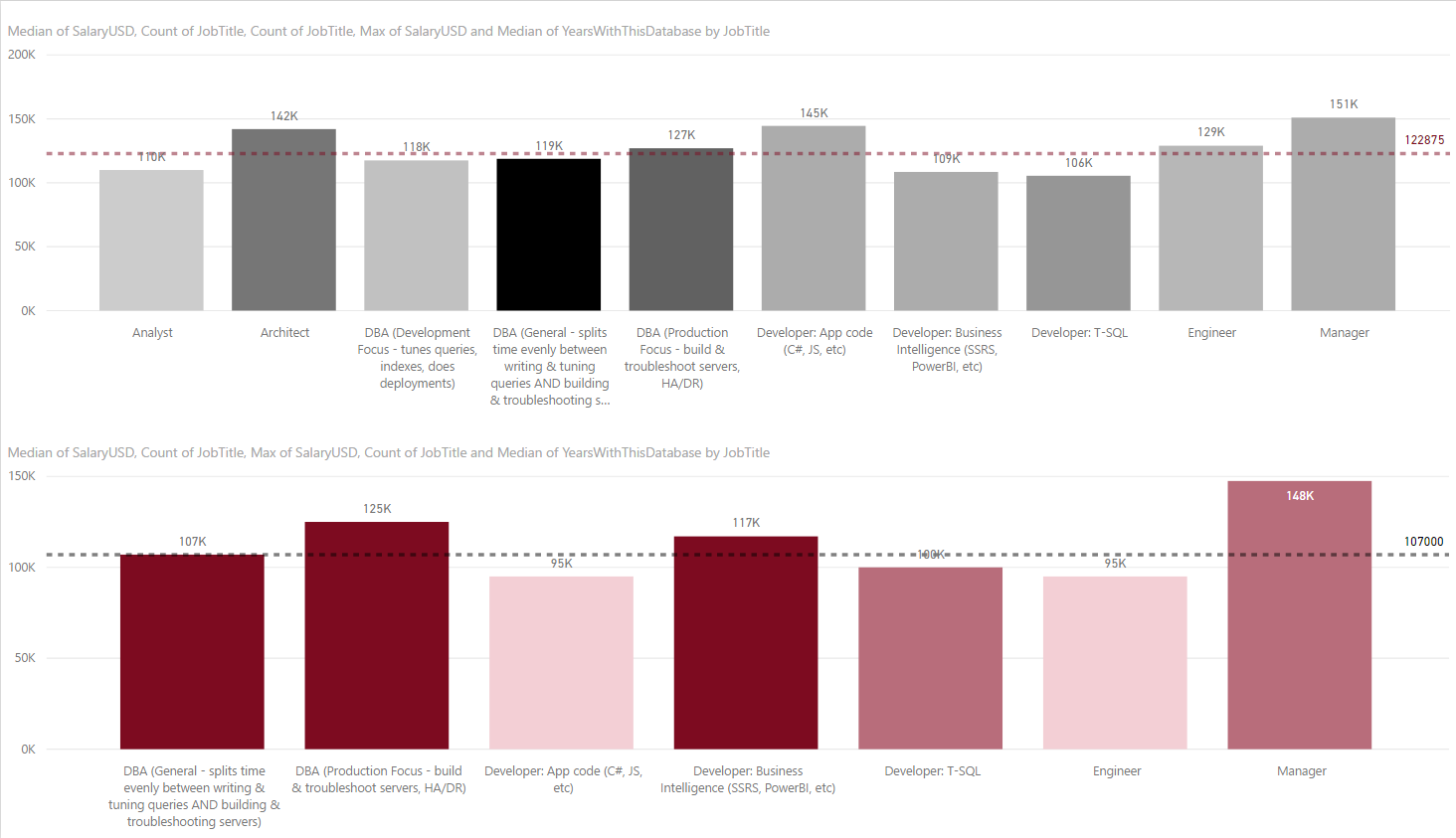 We don't know the individual situations for any of these people, but this information may help some people answer questions about where they may stand when compared to their peers.

Does it pay to stay home?

Finally, to get back to the title of this post, it pays to stay home! Maybe not for managers, but for most of the other people.

It pays in the United States

This report is filtered to the United States, Private sector, full-time employees, Job Titles with more than 50 results, all primary databases, a salary between $15,000 and $200,000, and a survey year of 2018.

The overall median salaries were $97,316 for office employees, $111,500 for part time telecommuters, and $114,163 for full time remote employees, which led to the click-bait title of this post. :-) It's possible that this is because only more senior or highly-valued employees feel comfortable working from home, or are even allowed to, depending on the company culture. 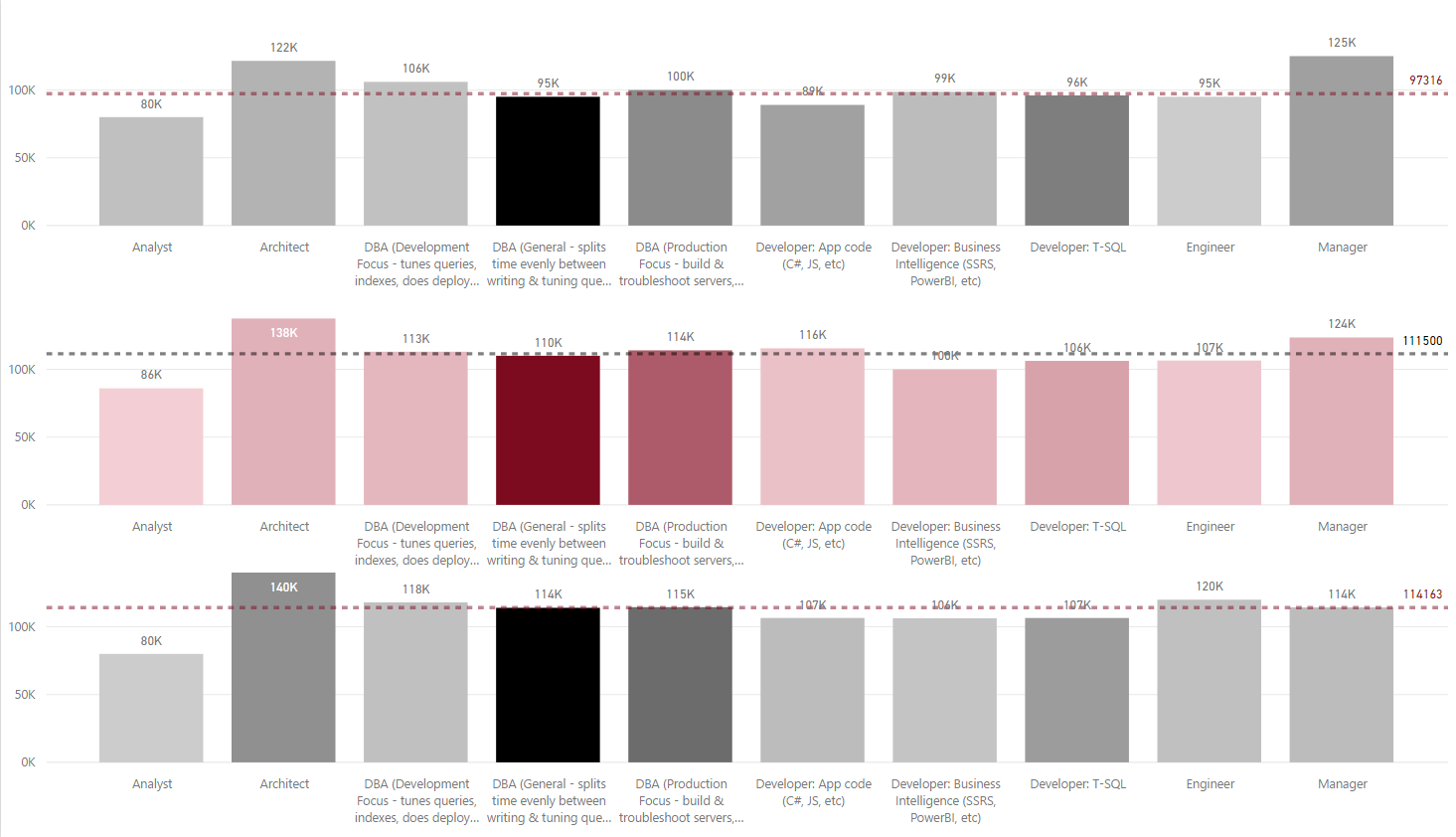 Not so much for the rest of the world

Out of curiosity, I looked at the same charts including all countries (except for the United States). The overall median salaries were $60,926 for office employees, $66,895 for part time telecommuters, and $64,100 for full time remote employees. Managers had the same pattern as the United States, but many of the results were all over the place (like the countries in the survey!): 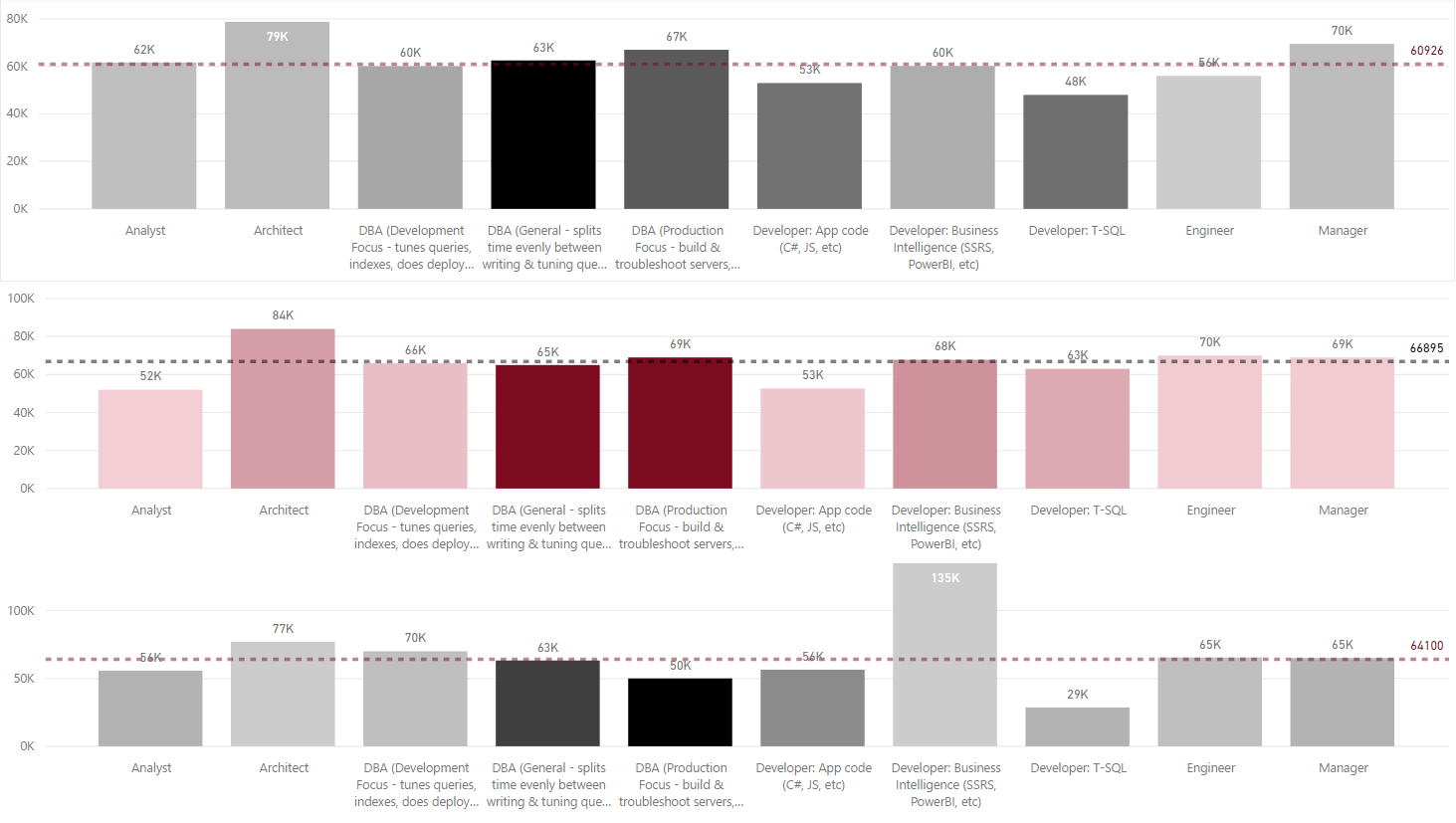 As I mentioned on Twitter, I would like to see a distinct question for "How many years have you been doing this type of job?" as well as, "How many years have you been doing this specific job at your current employer?" In addition, "How many total years have you been at your current employer?" and maybe, "Is your current job title the result of a promotion?" And even, "Did you negotiate your starting salary?" Basically, I'm looking for additional data to differentiate high and low salaries for the same job titles. Anything that can be done to improve the accuracy and participation would be great. As a data professional, I find that this is fun to play with, and perhaps creates more questions than it answers. Thank you, Brent, for running the survey!

Are they using SentryOne?

While there's no evidence in the survey results to support this claim, it is entirely possible that the highest earning data professionals are using SentryOne to stay on top of their game.