My First PowerShell : A Simple Story with Dramatic Flair

Recently, I needed an automated way to restart remote servers in my test environment for SentryOne. I knew that this sounded like a PowerShell-ish thing, but I lack what most people call experience when it comes to PowerShell. Maybe that's what everyone calls it?

First, I came across Restart-Computer -ComputerName $ComputerName -Credential $Credential -Force which seemed to be exactly what I needed.

Next, I opened PowerShell and gave it a try: 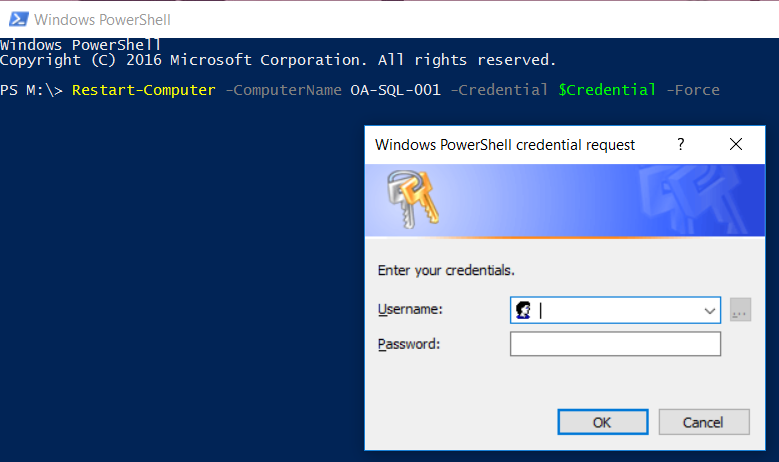 As shown above, this prompted for credentials to complete the task. Technically, this was what I wanted. However, I wanted to place Restart-Computer in a loop, therefore the popup asking for credentials wouldn't suffice.

I discovered that I could use a secure string for the credentials, however, none of the initial examples I found explained how to create the secure string. Way to make me feel even more like a foolish newbie. ;-) A little more searching and I was on my way.

Voilà! A secure string is created from a string that totally isn't my password. Seriously, I'm not *that* trusting.

Now that I've created a secure string, I can use it in a credentials object to avoid the popup:

Clearly this is something that looks more loop-friendly:

Now it was loop-ready and I wrapped it in a simple for-loop.

One of the first problems I saw was the computer name was OA-SQL-1 instead of OA-SQL-001. I had a formatting issue to resolve. Padding the zeros into the formatting was easy enough:

Another problem was that pasting the loop into the PowerShell command window and hitting enter didn't look right. It wouldn't run, either. There were '>' for all new lines and it appeared to simply hang when I would execute it. A coworker asked where I was running it and suggested that I use the Windows PowerShell ISE window instead of the more old-school PowerShell command window. I tried that and my loop executed without requiring any changes. Of course, I'd nearly lost my mind at that point...

Once it was working, I made some tweaks to output the computer name and timestamp so I could see the progress. I added a sleep timer so the host machine wouldn't flounder while restarting 100 VMs. I ran into some issues with the SQL Server service timing out on restart across a few random machines. Better to wait a little longer to know they're all safe than discover that during test execution.

As seen above, I was using Write-Host in my script, until I was advised against it. It turns out that Write-Host is kind of bad.

The following script is what I'm excuting now for various ranges of servers. It gets the job done. Could it be improved? Probably. I still have much to learn about PowerShell.

What I believed would be a quick foray into a line or two of PowerShell turned into a larger learning experience.

So I have this small amount of PowerShell knowledge now. It's created intrigue for me. I'm sure it can make my life easier and that I can integrate it into Visual Studio Load and Performance Testing to automate a few more steps for me. I'll be sure to share anything interesting in the future. In addition, I recently met Warren Estes at SQL Saturday Boston and heard wonderful things about his presentation, Get-Session "Powershell 101", so now is the perfect time to ask him to speak at Maine PASS!

What Does HIPAA Mean for the DBA?
Surprising but True: the Basics are Still Difficult
#EntryLevel : Compression & Data Types
SQL Server on Linux - It's No Joke
The Top 10 Mistakes Made by SQL Server DBAs