The SentryOne Test documentation uses many of the guide features described in the Task Factory documentation post. So, check out that post for some tips on navigating SentryOne Docs.

First up is the Installation category. It contains articles for system requirements, installation, and an overview of the product architecture. The architecture article includes details on the SentryOne Test Visual Studio Extension, Web Portal, and remote agents. 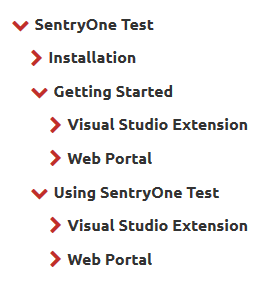 Next, move on to the Getting Started category. Like the Using SentryOne Test category, it branches into subcategories for the Visual Studio Extension and Web Portal components. In addition, each branch includes an article for how to integrate the remote agent with the selected component.

For the SentryOne Test Visual Studio Extension, there's an overview and introduction to creating a test project. Most importantly, perhaps, are the in-depth tutorials on designing and building tests.

Likewise, on the SentryOne Test Web Portal side, there are articles highlighting the Web Portal features. Here, you'll find introductions to using the Dashboard and Dashboard Details pages, as well as connecting to the portal.

Once you've completed the Getting Started articles, you're ready to move on to Using SentryOne Test. This next section provides the details for creating and using all the product features.

Finally, under the Using SentryOne Test Visual Studio Extension subcategory, there are details for using the extension to build tests. This section includes articles on the wizards, recipes, filters, parameters, data-driven testing, remote agent, coding custom assemblies, and troubleshooting. In addition, it contains subcategories for all available actions, asserts, and assets. 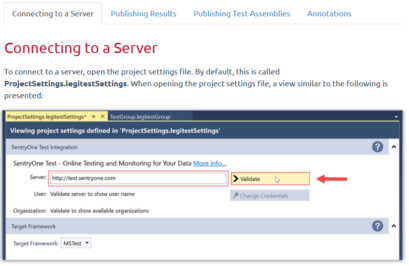 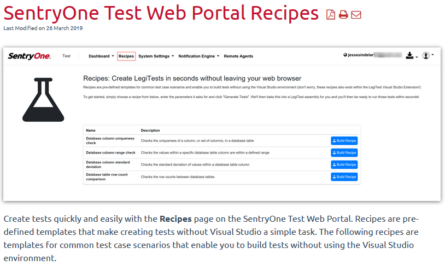 When using SentryOne Docs you can limit your search results to the SentryOne Test articles. To do this, use the Refine option in the search bar and select SentryOne Test from the list.

Wondering how to get the most out of SentryOne Test? First, get a solid overview of the pieces via the Architecture article. Next, review the Visual Studio Extension and Web Portal overview articles to learn more about what each component does best. Once you've covered the basics, please look at the SentryOne Test examples and tutorials to ensure you're not missing any of the fantastic features available.