In my first post in this series, I described some of the space savings that can be achieved with compression. In this post, I am going to focus on some of the costs.

One of the first costs to consider is the application of the compression itself. Compression is applied through an alter index rebuild statement (could also be a table when compressing a heap, but everything we will be working with in this series is the clustered index or a non-clustered index). 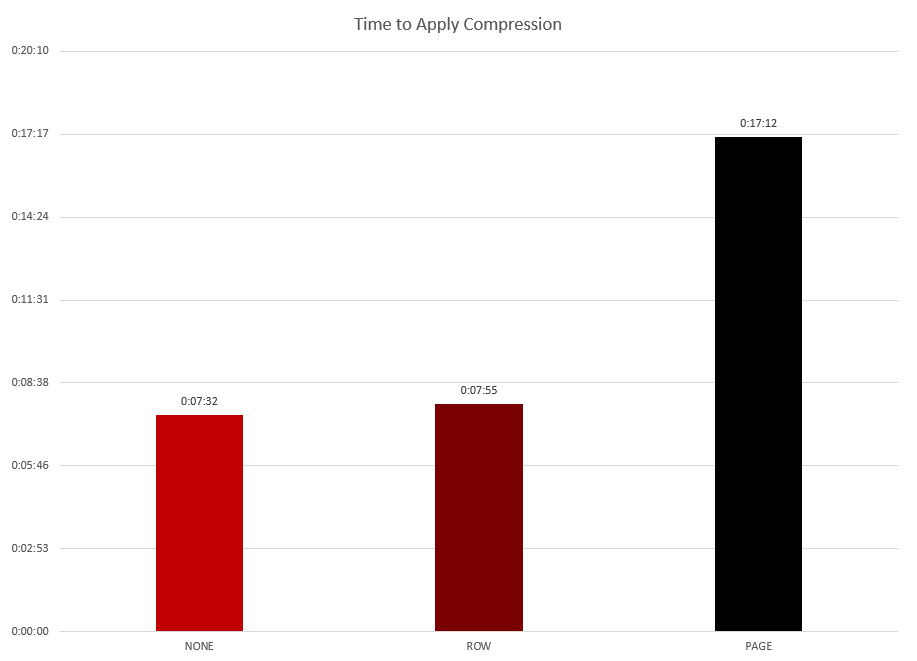 What happened to CPU during those times? Thanks to the "Create Baseline" feature in SQL Sentry’s Performance Advisor Dashboard, I was quickly able to collect some metrics. The average Total CPU Usage % nearly doubled when applying row compression and more than doubled when applying page compression. The maximum values nearly doubled for row and page, both hitting almost 100%. Clearly, you want to make sure that you apply compression at a time when your system has some extra CPU available. 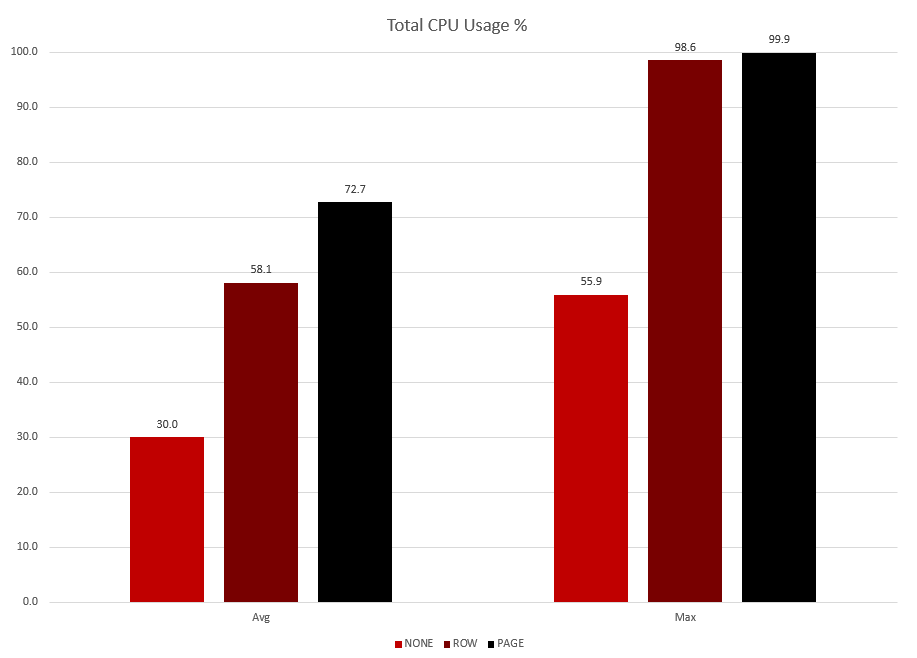 For the record, the machine used in this test (and subsequent trials in this test environment) had Intel Core i7-2600S CPU @ 2.80GHz with 1 socket and four cores (8 logical).

Another cost to consider when applying compression is the impact that it will have to your maintenance routine, specifically if that scheduled maintenance includes rebuilding indexes. I used SQL Sentry’s Fragmentation Manager to rebuild all indexes in my test database for some comparisons. In my first trial, I executed the defragment against all indexes in the database, with the rebuild set to offline. 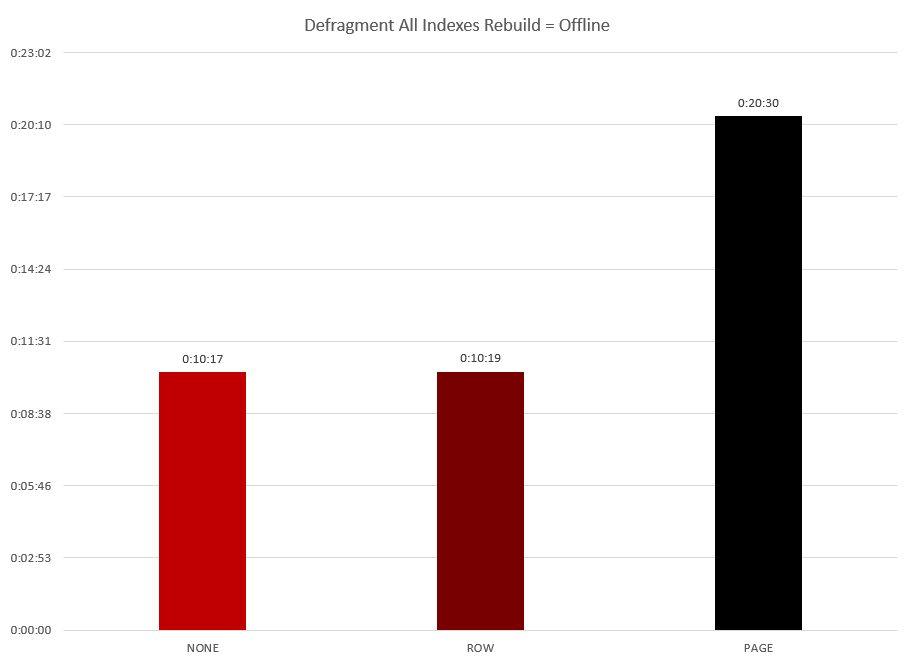 What about CPU usage during the rebuild? Looking at the chart below, you can see that average was two and a half times greater when using the database with row compression, and it more than tripled when page compression was in use. 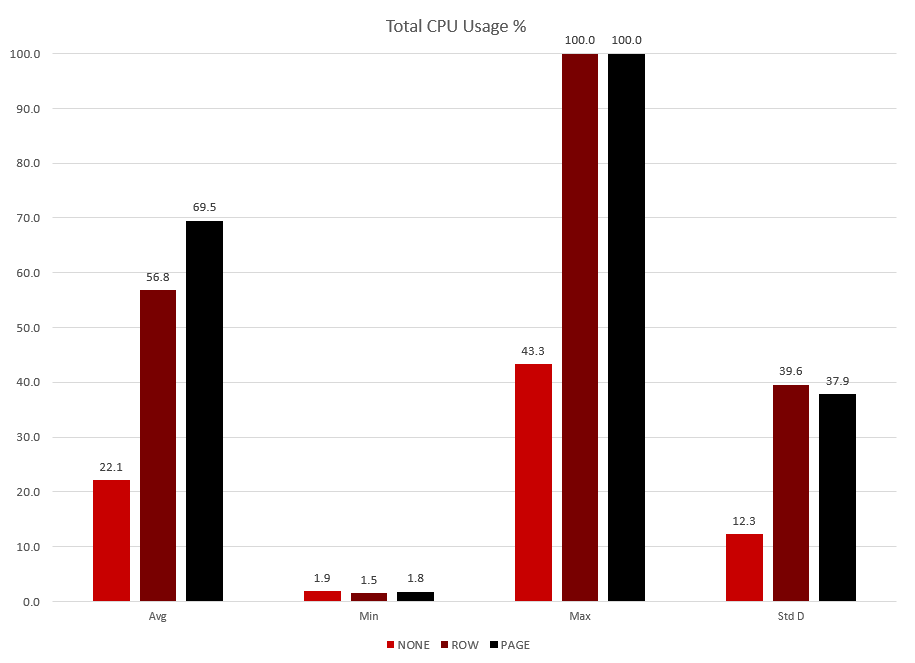 The following graph - from the Performance Advisor dashboard - shows CPU usage during the rebuild. The baseline without compression (in magenta) against page compression (in light blue):

CPU usage during rebuilds: comparing page compression to no compression

In my second trial, I executed the defragment against all indexes in the database, with the rebuild set to online. Here, row compression has more of an impact than it did offline, and page compression shows its more significant impact. 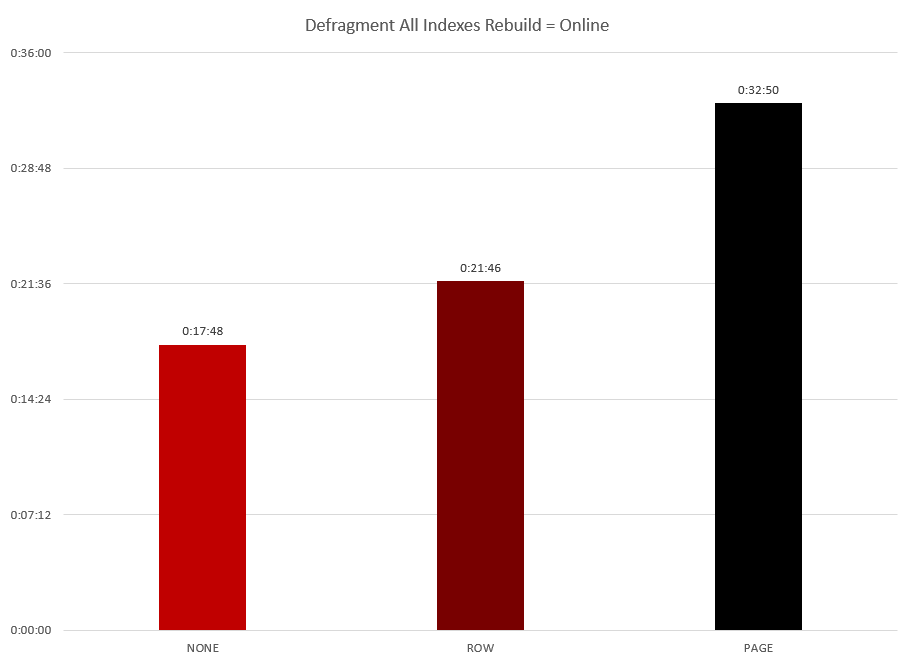 Rebuilding the indexes online is more CPU intensive than offline in general and there is less of a difference between none, row, and page compared to the offline rebuilds. 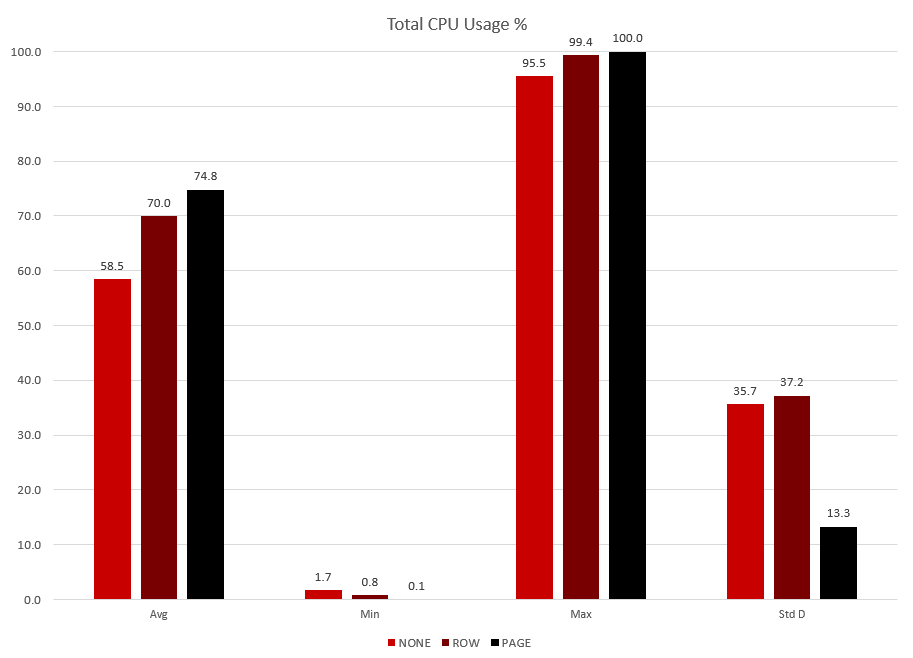 In another round of testing, I observed the overhead of using compression while the SQL Sentry software was doing its job of monitoring with Performance Advisor and Event Manager. I did this while SQL Sentry was monitoring one server in one set of tests and while monitoring five servers in another set. 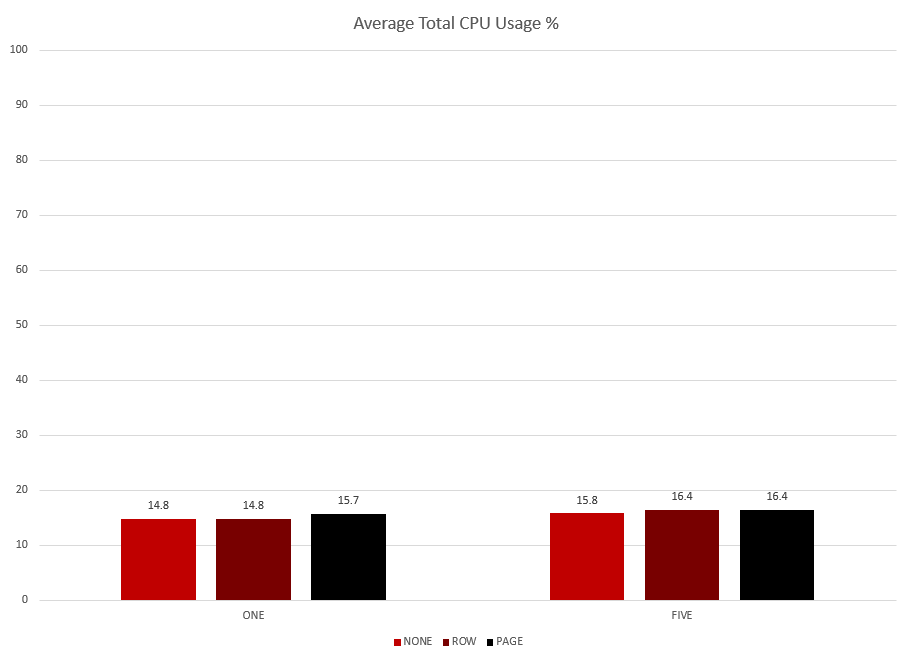 The average CPU impact was under 1% during these tests. Maximum CPU may experience higher spikes. I feel like it is important to mention at this point that many of the tables involved experience far more inserts and deletes than updates, which minimizes the CPU impact of data compression. That is something I will discuss in more detail in my next post.

In addition to playing in my test environment for this project, I also applied compression to the largest tables on disk in one of our busy production environments. I did this more sensibly, because I wanted it to be performing the way I will be recommending it to you. In addition, I did not want to risk having my access to the production server (or building) revoked! You can quickly get a list of the largest indexes by disk usage in your SQL Server database by going into Performance Advisor --> Indexes --> Grid. You could also use the Tree tab to group them by table. Depending on what a table or index is storing, the largest one isn’t necessarily the one with the most rows (click to enlarge). 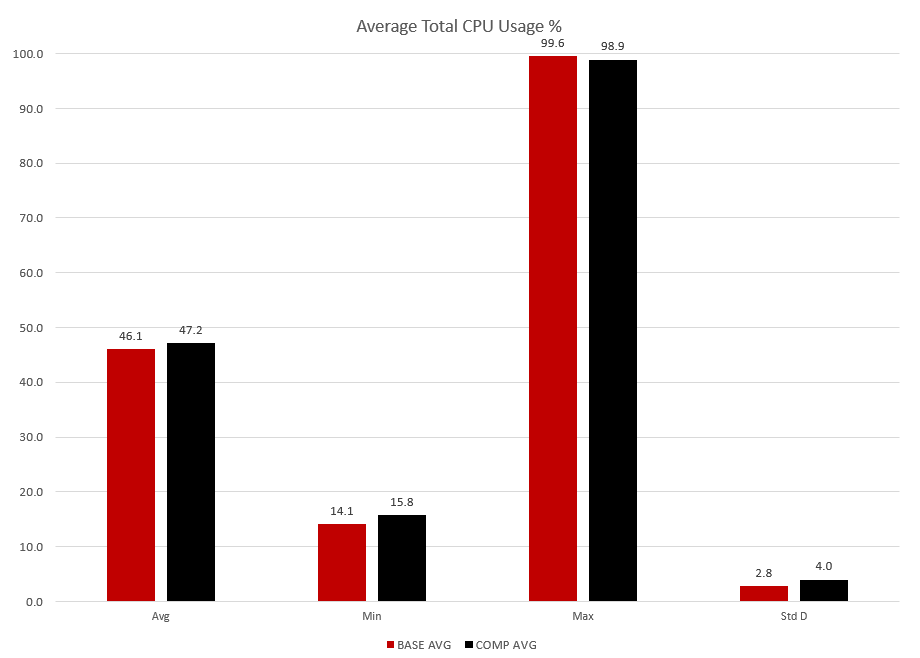 The average CPU in production was minimally impacted as my earlier testing has indicated it would. Isn’t it fantastic when something turns out just the way it did in test?

In my next post I will illustrate some of the additional benefits of data compression (beyond space savings) and walk through the decision-making process for deciding which indexes to compress and which method to use when compressing. One of the great things about data compression is the flexibility in how you can apply it. A mix of none, row, and page can be used across indexes on the same table. That flexibility is something we will take advantage of when applying compression in the SQL Sentry database.