Below are the system requirements for the remote agent, and here is the accompanying SentryOne documentation link.

When setting up a service account to run the remote agent, it is recommended that the agent has network access and permissions to all the data sources that you want to scan. In our case, we will be using SQL Server as our data source, which will require the following permissions.

If you are using another data source mentioned above, here is a link to our documentation that shows you the required permission set for the remote agent service account.

Now that we are finished talking about SentryOne Document and its requirements, let's move onto the installation and configuration of the remote agent.

At any time during the installation and configuration, if you run into any errors or have any questions, please feel free to reach out to our SentryOne support team.

To install the remove agent log onto the SentryOne document portal and choose the “Download Config & Remote Agent” button.

Drop the installer on the VM that will be running the remote agent and open the executable. Read through the Setup Wizard overview and click next. 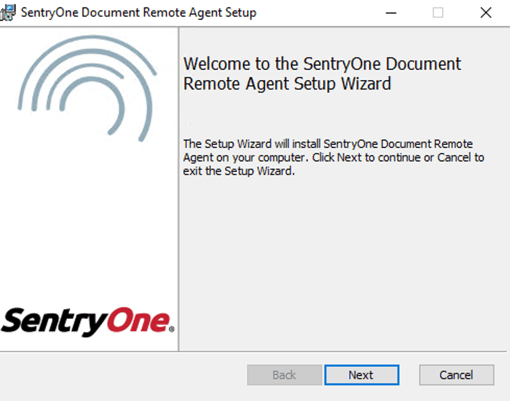 Acknowledge the SentryOne Document license agreement and click next. 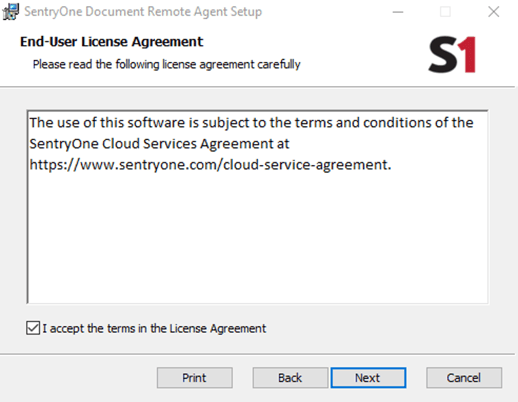 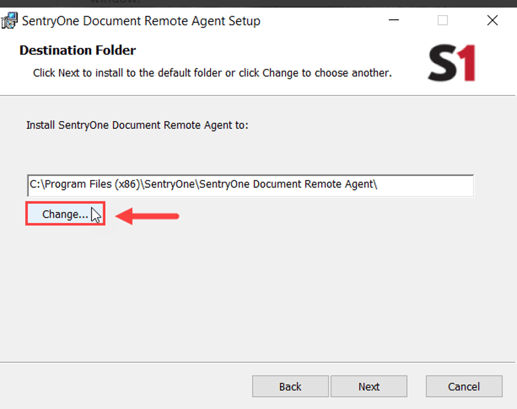 The installation is ready to be completed, click the install button. 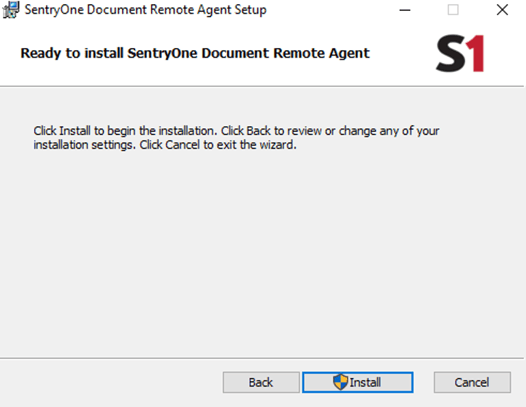 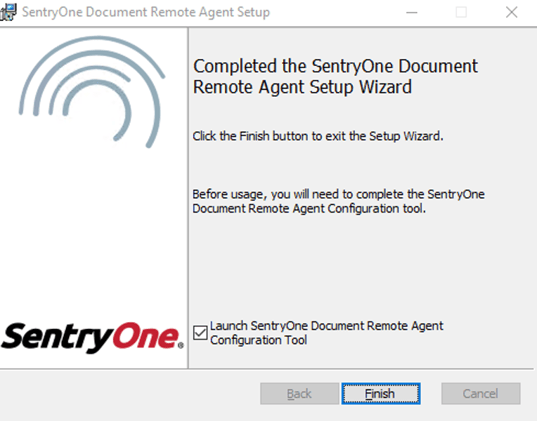 The configuration tool will prompt you for the “Service Instance Name” and “Target Host URL.” The Service instance name is the name of the VM where you installed SentryOne Document. The ‘Target Host URL’ is set to ‘https://document.sentryone.com’ by default. 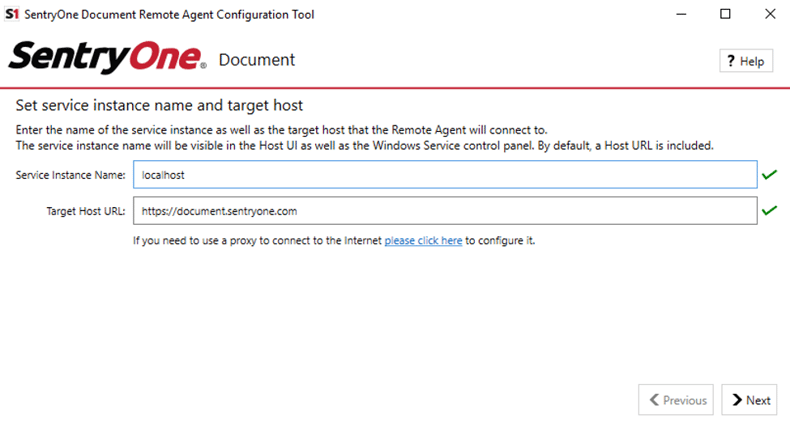 You will be prompted to enter the credentials for the service account that will run the agent. 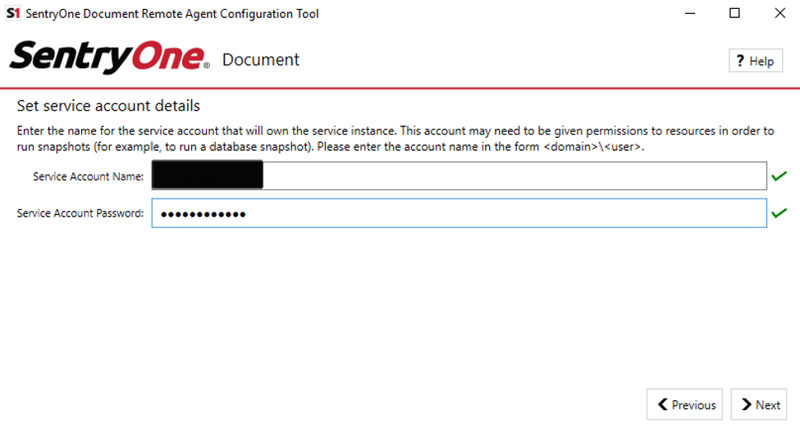 The following screen will prompt you to authenticate to the SentryOne Document URL. 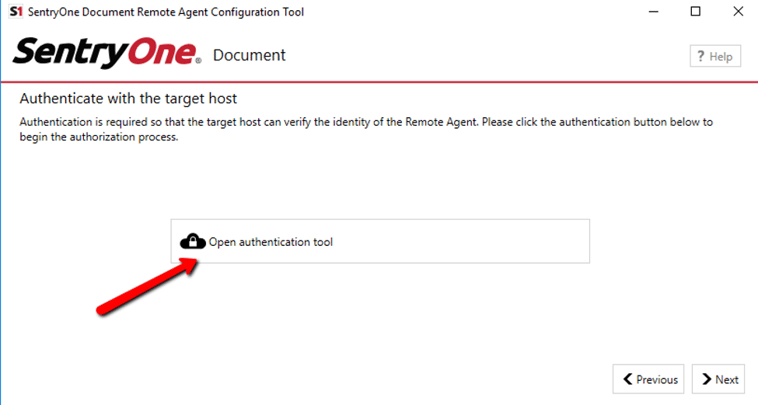 Once you have authenticated, you will be ready to install the SentryOne Document Configuration tool. 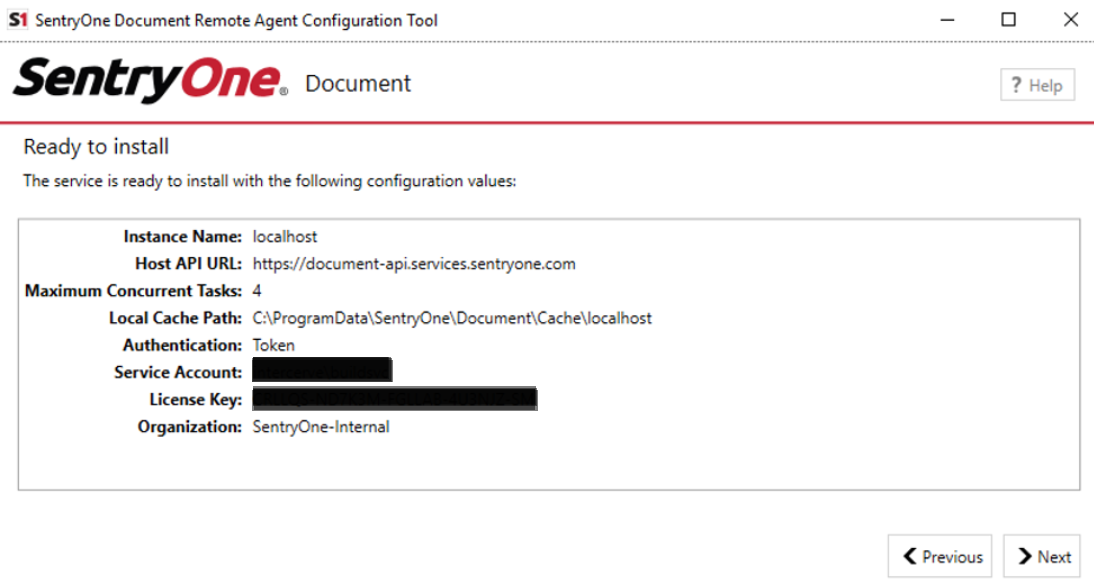 On the next screen, you’ll have a few options and you’ll want to run those in the order specified below. 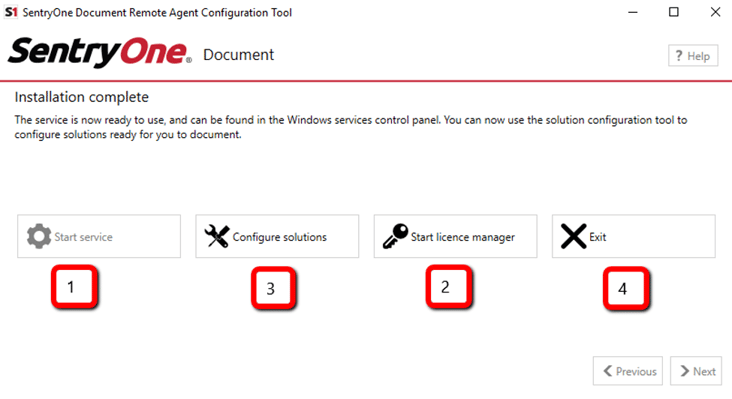 On the license manager tab, you'll be prompted to enter the license for SentryOne Document and to authenticate. Once the license is configured, you can move onto configuring solutions tab.

Click on the configure solution button and a new window will pop up. A solution is a collection of information sources that are used to provide data for documentation and analysis. Click the ‘Add Solution’ button and name your solution. For the purposes of this demo, I'll name my solution ‘Test.’

Next, you'll be able to add an item to the solution, which will be the data source. In this case, you'll call the item ‘AdventureWorks2016” and select the ‘SQL Server’ as the source type. On the bottom of the screen, it will ask for the server name. Once you enter that information, test the connection to the SQL Server instance via the service account. 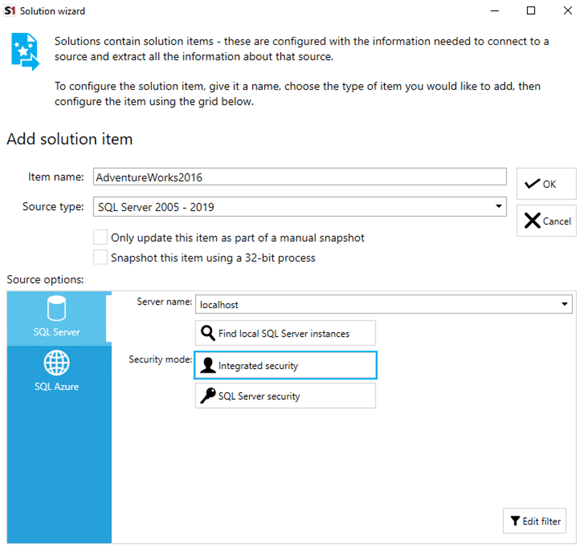 Note, there are two checkboxes in the image above, and the descriptions are listed below:

When selecting the snapshot icon, another window will open with the CLI commands that you need to automate and run our snapshots. The first CLI command is to authenticate the service account that is running the remote agent. The second CLI command will execute the snapshot. 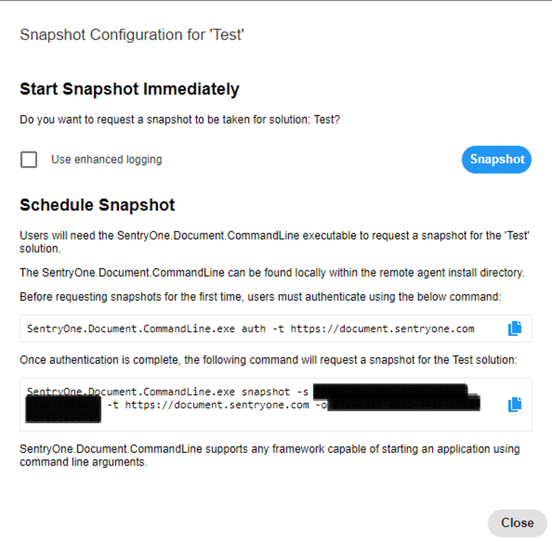 Copy the CLI commands to a text editor and save them for later. To get SentryOne Document snapshots running in a pipeline, you have another step to complete. Log back into the VM that is running the remote agent and open CMD as administrator. Change the directory to where you installed the SentryOne Remote agent, and then run the first CLI command.

After running the authentication command, a new browser window will appear, which you will need to authenticate once more. After successfully authenticating, you are finished with the install and configuration of SentryOne Document. Next, you'll move onto setting up an Azure DevOps pipeline to run your snapshots.

What is Azure DevOps?

Azure DevOps is a product provided by Microsoft, formally known as Team Foundation Server and Visual Studios Team Services. This tool provides version control, reporting, requirement management, project management, automated build and release management. The tool covers the software development lifecycle and enables DevOps capabilities. Azure DevOps can orchestrate continuous builds and releases. In this case, you will set up a continuous deployment trigger that will take snapshot of your data source is when it is released.

Setting up an Azure DevOps Pipeline

I’m not going to go into much detail on the build side of packaging up database upgrade scripts and integrating them into your project. I’ll mainly focus on setting up a release side of the pipeline that will take a snapshot of your data source. The diagram below shows the entire pipeline from beginning to end. The red highlighted section is where you'll set your focus.

The ‘Use a personal access token in the script authentication’ option under the PowerShell snippet will need to be selected. Copy the PowerShell script to your clipboard and log onto the same box that you installed the SentryOne Document remote agent and open PowerShell as administrator. When running the script in PowerShell, it will ask for some information as specified below:

Once you have authenticated with the service account, you can log back into Azure DevOps and navigate to the releases section. On the ‘Releases’ screen in the top left you'll see a plus sign next to the words ‘New.’ Select to create a new release pipeline and then for the ‘Select a template’ section type ‘Empty job,’ click create.

Click the ‘Empty job’ and name it SentryOne Document Snapshot.

Click the jobs link inside of the SentryOne Document snapshot stage.

Remove the Agent job by selecting it and clicking the delete key. Click the ellipses button on the stage and select “New Deployment Group job.” 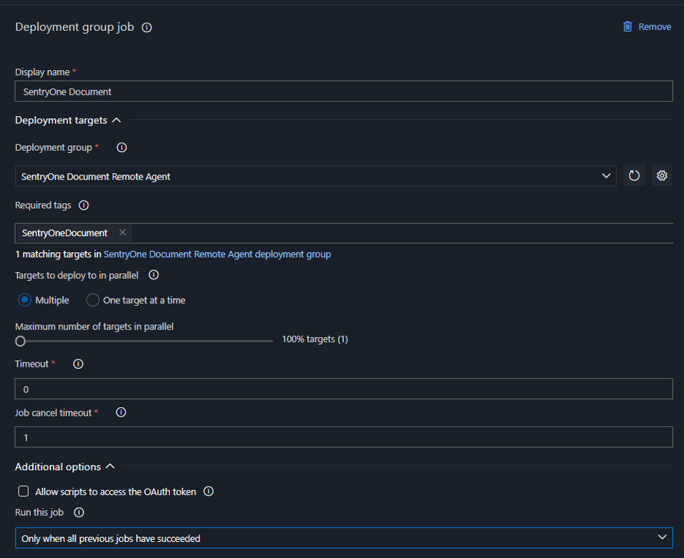 Next, you need to add a command line job to the ‘SentryOne Document’ job. Click the ‘Plus’ sign on the right side of the deployment group job and search for ‘Command line.’ Add the CMD task to the deployment group job and name it ‘Snapshot.’ Copy the SentryOne Document snapshot CLI command that you copied earlier into the ‘Script’ window. If you did not copy the script to run the snapshot from earlier, then log into the SentryOne document portal and click on the camera icon next to your solution.

There should be two CLI commands: the first command is to authenticate, and the second command is to run the SentryOne Document snapshot against the solution. If you expand the ‘Advanced’ node on the CMD task, you’ll see a place to enter the ‘Working directory.’ Enter the directory where you installed SentryOne Document and check the ‘Fail on standard error’ checkbox. 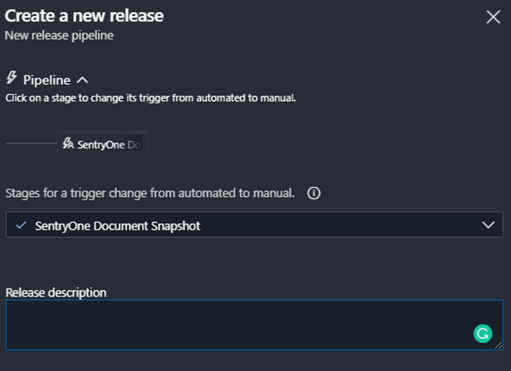 Save the job and create a release by clicking on the ‘Create release’ button on the top right of the screen. A new window will open where you can specify which stage you'd like to deploy. If you want to deploy the release automatically, do not select the ‘SentryOne Document Snapshot’ stage. Click create at the bottom of the screen. 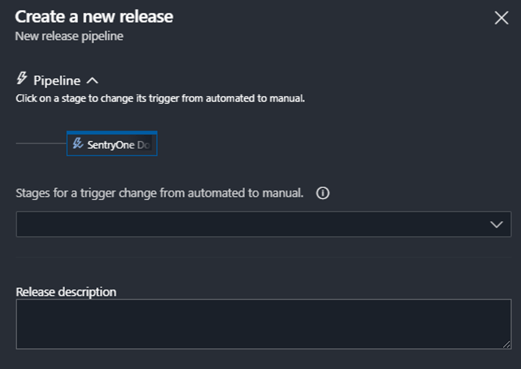 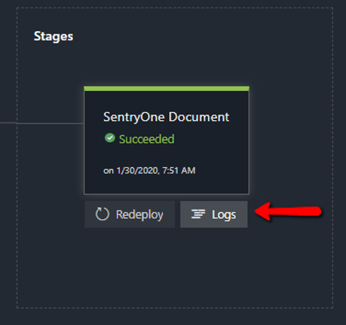 Here you can see the snapshot in progress against our solution. Note, that sometimes a deployment will succeed in Azure DevOps, but the snapshot will fail in logs section of the SentryOne Document portal. To troubleshoot this, select the task that failed and download the log file. If you’re having trouble diagnosing the error message, then feel free to submit a support ticket at SentryOne.

If you want these snapshots to run on a predefined schedule, you can set that up back on the SentryOne Document release definition. Click on the ‘Schedule set’ under the artifact node and enable the schedule release trigger. 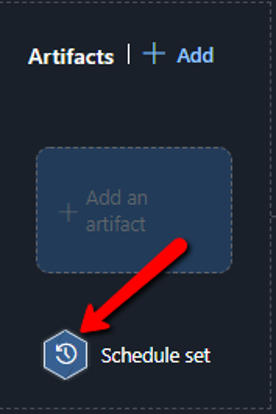 As an example, let's say that new versions of your data source are released every Wednesday at noon. Therefore, you'll want to schedule a snapshot to run every Wednesday at 1 PM. Toggle the ‘Schedule’ switch and set your schedule. 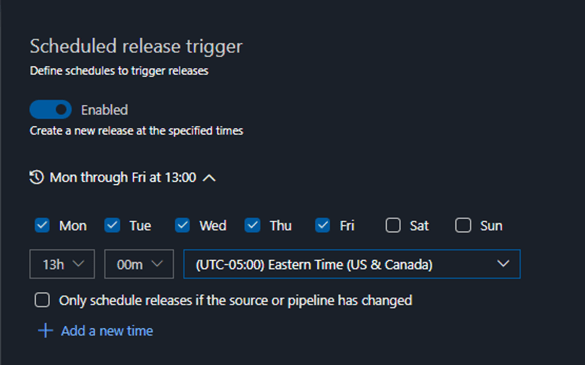 Great! You have successfully run a SentryOne Document snapshot against your solution and set up a schedule. 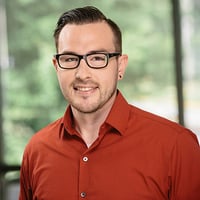 Jared works as a DevOps Engineer at SentryOne. Jared focuses on optimizing the process and tooling used by our delivery teams and evangelizes DevOps practices. He originally joined the SentryOne team in 2017 as a Technical Support Specialist. He moved from the support team and joined the engineering team in 2018. 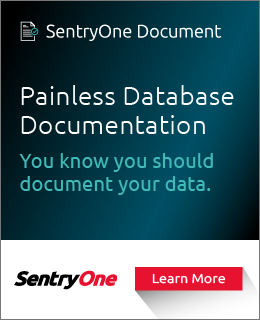