In my previous posts, I covered how the Unit Test Generator works and why we chose to implement it. If you haven’t read them, check out Part 1 and Part 2. In this third post, I will talk about what we did to implement it and the structure of the extension.

So, full disclosure: we did not finish this all during the Innovation Sprint. We made a great start, but like any software project there was a lot left to do at the end of the first frenetic development phase.

The basic structure is a Visual Studio extension wrapper and a core project that contains the actual code generation. This was a great side-benefit of moving to Roslyn—the code generation could run in isolation outside of Visual Studio, which had an important aspect on testability since Visual Studio is not a pleasant environment from the inside. Unit testing Visual Studio extensions is extremely hard—you very quickly descend into COM-based interop, depending on which internal services you rely on. The idea was to keep the Visual Studio specific code as light as possible—really the bare minimum that we could write while still achieving the integrations that we wanted.

The old extension worked through the solution explorer exclusively—and I thought that was good enough until I experienced the code editor integration offered by the new extension. I really did not know what I was missing. A case in point was navigating to the existing tests. Previously that involved moving the mouse across to the top of the solution explorer, clicking the ‘sync’ button to highlight the currently open document, right clicking the solution explorer, and clicking ‘go to tests.’ Now, you just right-click on any member in the type and click ‘go to tests.’ While the previous method doesn’t really sound like a herculean effort, it really did interrupt flow more than it needed to. 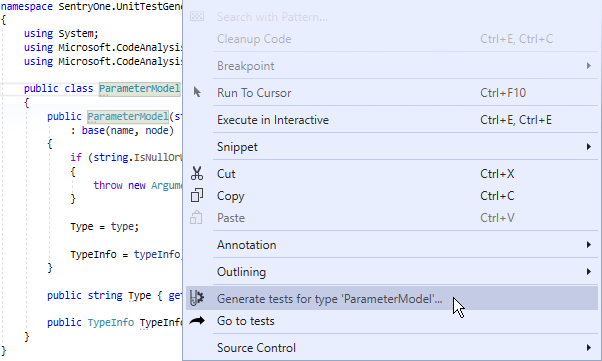 Generation of tests available in the code editor

The generation of tests is now available in the code editor as well, which again is a massive improvement. One additional feature that we implemented was regeneration—generating tests for certain members again and over-writing the existing tests. This is particularly useful when you’ve added a constructor parameter, for example, and you want to re-create the parameter null check tests for the constructor. (Pro Tip: hold Shift while opening the context menu to see the regeneration option).

There are also some niceties we added to the extension, such as configurable naming for projects, files, and types and automatic creation of test projects, including installing dependencies for your chosen frameworks from NuGet.

Getting to the Core of the Issue

The core library is where all the magic happens. This is where we query the Roslyn semantic model to inspect the type we want to generate tests for and generate the output. The generation is based around strategies—small bits of focused code that understand one particular type of source code and generate the tests for that type.

We have several types of strategy in the code:

Some things happen outside of the strategies. For example, any time we emit a type reference, we store it so that we can add the relevant using statement to the namespace, and, optionally, add the assembly reference to the test project.

Which came first, the test generator, or the tests for it?

For the non-strategy-based code, this bootstrapping worked really well. For the strategy code, classic unit tests didn’t meet the standard that we wanted to achieve. Our first priority was to ensure that output could be compiled for every combination of mocking and test framework and didn’t interfere with the methods generated by any of the other strategies. We used a multi-pronged approach here:

Remember: our aim here isn’t to ensure the tests that are generated pass when you run them—we are generating tests to be completed. For simple POCOs or model types, we’ll generate tests that compile, pass, and completely cover the source type. For methods, however, we don’t want to get into generating test code that completely exercises the content of the method body. That would firstly be outside of the intended scope and secondly would take away a large chunk of the benefit of testing—verifying that the code matches the intent. If we generate tests to completely exercise the content of a method, all we are really testing is that the compiler works, rather than testing that what was written does what we thought it would.

We are currently open sourcing the Unit Test Generator—we feel like we have made a great start. It will be fascinating to see how the community engages with it. There are some things that we would like to do in the future:

Perhaps you’d be interested in helping move it forward? Feel free to join in by downloading the extension and contribute your ideas!