Since releasing v6 a couple of months ago, we've been hard at work on some cool new features for v6.1. Our x.1 releases are usually comprised mostly of fixes for bugs not caught during the major release (x.0) beta, and a few new features. This x.1 release is different in that contains many exciting and high impact new features, and a higher feature:fix ratio than normal. This is likely due to the lengthy v6 beta, as well as some new QA processes we've put in place. Change list is here.

We've just published the v6.1 Release Candidate to the website, and our team is showing it off now at SQLBits 8 in Brighton, UK. Read on for an overview...

I'm covering this one first, as it's been on the feature list the longest. Believe it or not, we obtained our SNMP "enterprise number" and started on our MIBs in 2004, not long after the original release of Event Manager v1! Our enterprise number is 20707, and the latest enterprise number issued as of this post was... gulp... 37722. (I think I'll filter this feature from our "average turnaround time" calculation). ;-) We didn't actually start coding SNMP support until recently though – for a few reasons it kept getting prioritized down: high complexity, relatively low demand, and the fact that users have been able to work around it and get alerts into other monitoring systems via our "execute" actions (Execute Process and Execute SQL). SNMP is not a feature that everyone uses, but those that do really depend on it.

Fortunately, earlier this year, the most knowledgeable and capable SNMP developer on the planet, Eric Eicke (b|t), joined our development team. Eric developed the first .NET-based SNMP component several years ago, and it's used by many large organizations, including Microsoft and HP. Eric was also the one that helped us get started on SNMP back in 2004. There was no fumbling around with RFC's, Eric knew exactly what needed to be done and did it, including v3 support, authentication, and encryption!

MIBs are installed as part of the new setup. Once you've loaded them into your enterprise monitoring system, activating SNMP in SQL Sentry is straightforward from the new SNMP Config tab: 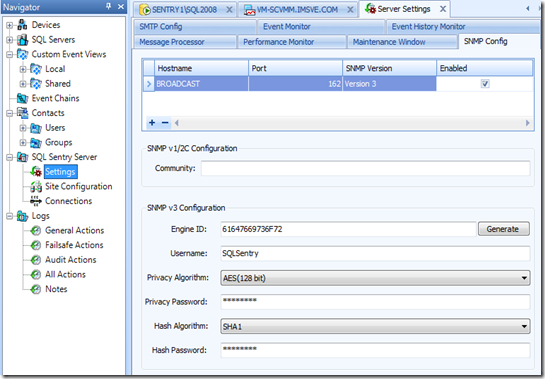 Once configured, simply tick the Send SNMP Trap action for any condition (along with a ruleset if desired):

This next feature is not quite as old, but is equally as exciting. ;-) Performance Advisor has always had "Top SQL" collection and normalization/aggregation, and this year we became the first to introduce integrated query plan capture and analysis. So we automatically catch your heaviest queries, and give you best-in-class features for making manual query analysis as quick and easy as possible. If your server has 5 or 10 "problem" queries, and you've got some experience dealing with execution plans and indexes, no problem, you can use Performance Advisor to straighten everything out in an afternoon. But what if you're dealing with 20, 50, 100, or more problem queries? Or what if it's not the individual query that's the problem, but rather the cumulative impact?

For many systems, automated workload-level analysis may make more sense. That's where Qure comes in. Developed by DBSophic, Qure is the brainchild of MVP Ami Levin, and is the leading software available for SQL Server workload analysis. It uses a copy of your production database and makes index, schema, and/or query changes, then tests those changes with real workloads to see which work best, before making any recommendations. Of course, we all trust the query optimizer to behave predictably and make good decisions <ahem>, but there's just no substitute for good, old-fashioned brute force validation.

SQL Sentry and Qure provide complementary functionality with very little overlap, so bringing the two together made a lot of sense for both companies. As such, DBSophic has just released a new version of Qure which only works with trace data from the SQL Sentry repository database (v6 or above), Qure for SQL Sentry: 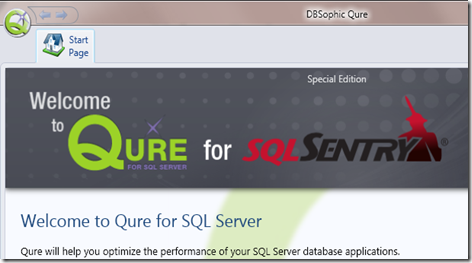 Here are my top 3 reasons to try Qure for SQL Sentry:

You can run an unlimited number of sample analyses with the Qure for SQL Sentry trial software, and it will give you some good, actionable recommendations for FREE.

"Too Much Data" Begone!

Longtime Event Manager users will really appreciate this feature. Prior to this release, if you had too many event instances in a range to render them on the calendar in a meaningful fashion, we would show a block like this for the entire range:

When we introduced Performance Advisor and began showing performance events on the calendar, Top SQL in particular, these blocks became much more prevalent, and could really hamper visibility as well as increase time spent on filters.

Now, instead of a big "too much data" block, you'll see a small hatched rectangle on the far right of the range:

When you hover over it the entire range is highlighted, and a tooltip is displayed which shows how many other events exist in the range. The events actually displayed in the range have been prioritized by status and runtime – failures and longer running events are shown first, the rest are filtered from view. Just like before, you can double-click to zoom into a smaller range and see the other events.

Previously, when you selected an event instance on the calendar, we would highlight other related instances using basic logic. For jobs and tasks we used the server and job name, and for Top SQL we used the "Text Data." So other Top SQL instances would only highlight if the SQL matched exactly. Depending on the scenario, this could be very limiting.

Now, you can pick and choose exactly which attribute or combination of attributes to use for highlighting related instances. Here are some examples:

All of these scenarios and more are possible. You simply right-click a calendar event and select the common attribute(s) using the new Highlight context menus:

You now have the ability to drag any SQL Sentry main level tab outside of the Console. This is especially nice for multiple monitor setups. This shot shows a main tab being undocked: 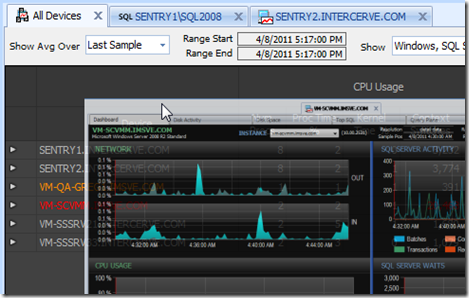 SSDs are definitely on the upswing in the SQL Server world. Over the past couple of years we've seen much greater acceptance and adoption in mission critical SQL Server environments, and the company that's making the most waves here is Fusion-io. Previously, none of their drives would show up in our Disk Activity view, however, due to their PCI-based architecture and the fact that they're represented differently in the Windows subsystems we use to gather drive data.

We've addressed this in v6.1, so if you have any Fusion-io drives, single or duo, they'll be rendered on Disk Activity just like all other drive types. This gives you a great way to validate their performance – latency on these drives should be low enough that the flow lines are always green. If they are not, there is a problem.

Here's a shot of a high volume OLTP system in the U.K. with lots of database files, running on a Fusion-io ioDrive and ioDrive Duo card with Windows RAID-0, courtesy of Christian Bolton (b|t) of Coeo: 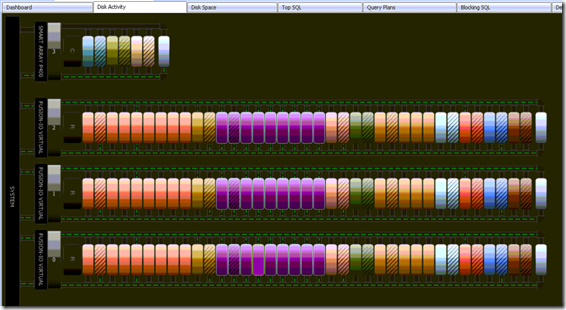 The new version of Plan Explorer is 1.2, and the features I'll cover below apply to both the full SQL Sentry v6.1 and Plan Explorer v1.2. The codebase is the same between them, but there are additional capabilities that open up when you use the full software, as covered in my post on SQL Sentry v6 Plan Analysis Features.

Previously you could retrieve the estimated plan from a server, but to view an actual plan you had to run the query in SSMS and copy the plan into Plan Explorer. Now you'll see an Actual Plan toolbar button that allows you to retrieve the actual plan for any query:

Just like SSMS, the query must be executed against the target in order to get the actual plan. You will see a progress bar while the query is running, but you won't see any query results when it completes, only the actual plan info along with actual CPU and read IO metrics.

Note the new Command Text tab above. This is an editable view of the query text, and this is what gets executed. The Text Data tab is no longer editable – that SQL comes directly from the plan, and there were several problems with making it executable that are beyond the scope of this post (and now water under the bridge). ;-) I think you'll find the new design much simpler, and more robust.

We've had some lively discussion on whether or not to go down the path of showing results, but where we ended up is that Plan Explorer is a plan analysis tool, not a query tool. More often than not, viewing results isn't required to make good plan optimization decisions. We of course already show the number of estimated and actual rows, and in most cases this is sufficient.

One big advantage of not returning results is that you'll often get the actual plan back much faster than you would otherwise. For example, a query that returns 200,000 wide rows and takes 30 seconds to load in SSMS may take only 2-3 seconds in Plan Explorer.

Prior to this release, we've shown expressions only in operator tooltips. The higher you go up the plan tree, the more levels of nesting you can have, and tracing an expression all the way back to its source using tooltips could be daunting.

This is why we've added a new dedicated tab for expressions. The tab only appears if expressions exist in the plan, and it shows standard and expanded views of all expressions, along with the entire references tree for each: 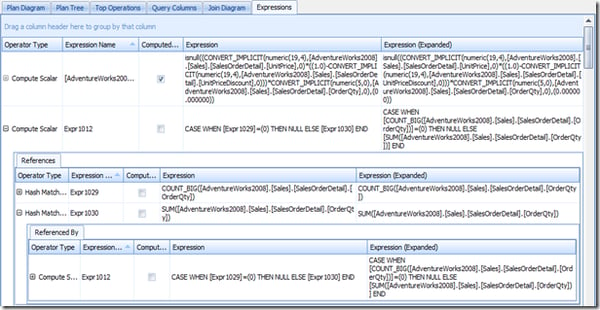 I should warn you, there is a lot going on behind the scenes with expressions... the optimizer generates many expressions that you'd never normally see, and it can cause overload at first. More on this in a future post.

This tab only appears if the query has joins. It presents a view similar to the Query Designer diagram in SSMS, although only joined columns are shown for each table. Join information exists on the Plan Diagram and Query Columns tabs, but this is a different look at it which can be especially valuable if your query has views or nested views. The query optimizer flattens all views down to their base tables as part of the plan generation process, but in SSMS you see joins for the views, not the base tables. This can make it difficult to decipher which tables and columns are actually involved in a join. Fortunately, the plan contains this data, so we're able to reconstruct and show the base table joins from the plan XML. This can be very helpful for making good indexing decisions to support those joins. 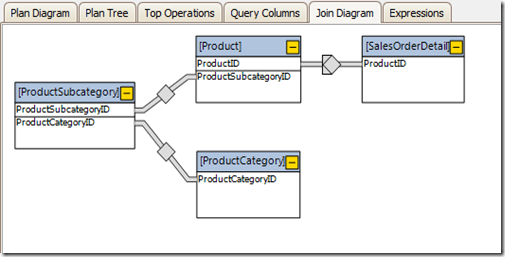 This is our first cut at joins, and getting it to this point has not been trivial. What looks like a simple join on the plan diagram can be oh so much more behind the scenes. We're still finding scenarios that we haven't seen before, but we think it's far enough along that it can provide value. If you run into anything weird, please do let us know about it – email the plan to support at sqlsentry.net.

It's your feedback that enables us to continue to improve and evolve the software, so please keep it coming!