For Swedish Match—a manufacturer of tobacco and nicotine products with more than 4,000 employees and facilities worldwide—a little goes a long way when it comes to managing their hybrid SQL Server environment. The company’s small DBA team manages nearly 100 production servers and more than 75 development/test servers, with SQL Server hosted locally and about 50 SQL Server databases on Microsoft Azure.

With SentryOne, Swedish Match can quickly discover the root cause of performance issues—and monitor their international, hybrid SQL Server environment with ease. 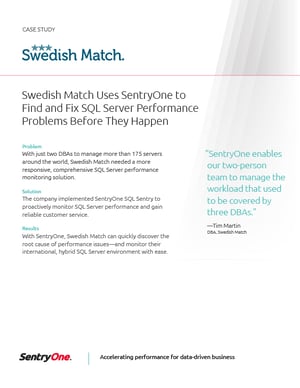 To learn more about how Swedish Match used SQL Sentry to shift from reactive to proactive, download the case study.

“SentryOne enables our two-person team to manage the workload that used to be covered by three DBAs.”

As expected in an environment of that size, the team was using a third-party SQL Server performance monitoring solution. But over time, they realized the solution wasn’t up to the task. The support team was slow to respond and bug fixes were intermittent, according to Swedish Match DBA Tim Martin.

“Every time we had a problem, we would put in a ticket and it would be days before we received a response,” says Martin. And promised fixes never materialized. “It became so problematic that we stopped calling; we just lived with it.”

When Martin found out one of the three DBAs on the team was retiring and that the position wouldn’t be replaced, he knew it was time to find a robust SQL Server performance monitoring solution that could help them pick up the slack with one less DBA on the team.