What are SentryOne V Sentry CPU and Memory Usage Metrics?

SentryOne V Sentry provides visibility into your virtual environment so you can analyze network, CPU, memory, and storage for VMware hosts and virtual machines (VMs). Knowing CPU and system memory usage helps you troubleshoot SQL Server performance problems that are caused by problems in the virtual environment.

You'll find this feature in:

Are you experiencing sluggish SQL Server performance in a VMware environment?

Troubleshooting SQL Server performance in a virtual environment on VMware can be challenging. It's tough to determine whether the problems lies with the SQL Server or with the VMware environment.

Is it because you are running into issues since you’ve migrated your SQL Servers to a new physical server host that might not provide sufficient CPU resources? Or because your database server is running on a VM guest that is CPU constrained?

Are your SQL Servers starved for memory because the VM host server is conserving memory by "ballooning?"  Or is one of your VM guests using too much memory, acting as a noisy neighbor?

As a DBA, it is paramount that you have the ability to monitor what’s going in your SQL Server database virtualization layer. SentryOne V Sentry helps you solve these kinds of issues by providing end-to-end visibility into your VMware environment.

In order to maximize your virtual layer performance for SQL Server, SentryOne provides several VM host and guest metrics that help you identify and remedy VM performance bottlenecks that could be also be affecting SQL Server performance.

The V Sentry dashboard shows the CPU usage chart for your VMWare host. The CPU Ready Time section gives you the percentage of time that the virtual machine was ready, but couldn't get scheduled to run on the physical CPU.

High CPU ready times can be prevented by right-sizing your virtual machines and not over-provisioning your host CPU resources.

Similarly, Co-Stop is another useful VM guest metric that helps you find out the amount of time a virtual machine was ready to run but incurred a delay because of co-scheduling contentions. Sizing VMs to use the least number of virtual CPUs (vCPUs) possible minimizes the time needed for co-stop waits.

Keeping an eye on VMware memory can help you keep SQL Server running at peak performance in a virtualized environment. Because SQL Server performance so often depends on memory availability in the buffer pool, you need to know when something is affecting the amount of memory available.

VMWare uses a technique called memory ballooning to reclaim unused memory from a VM guest if the host is low on memory.  You can use V Sentry to analyze whether and how frequently ballooning occurs on the VM guest running SQL Server. Memory ballooning can negatively impact your virtualized SQL Server performance—especially if your VM host is under memory pressure because memory resources are over-committed. 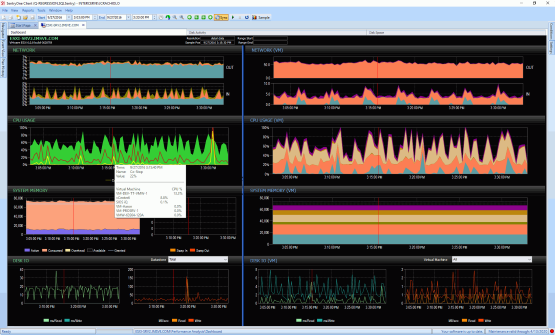 V Sentry provides VMware resource utilization metrics so you can troubleshoot problems in the virtual environment that might affect SQL Server.

What You Can Do with V Sentry CPU & Memory Usage Metrics

Ready to find and fix problems in your virtual environment?

“With the SentryOne support for VMware host monitoring, the data team is able to see potential bottlenecks in data processing, particularly during the four months each year that we’re focused on our non-traditional, tax-based business.”

Get A Free 2-Week Trial