For HealthcareSource, a technology and services company that provides talent management solutions to 3,500-plus hospitals and other healthcare facilities, a constantly changing data environment is the norm—as are high expectations for database performance.

HealthcareSource used SQL Sentry to establish performance baselines so that the team could mitigate any impact on performance while migrating databases between data centers. 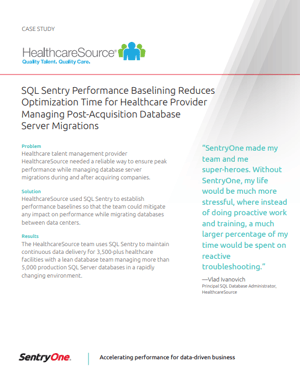 “SentryOne made my team and me super-heroes. Without SentryOne, my life would be much more stressful, where instead of doing proactive work and training, a much larger percentage of my time would be spent on reactive troubleshooting.”

When performance testing lagged in a new datacenter, Ivanovich said that often the DBAs would point to problems in the application code. The developers would target the new database server as a root cause. It was time-consuming to determine where the team should concentrate their troubleshooting efforts—for example, which query plans could yield the greatest impact on performance.

Analyzing and documenting performance metrics is tedious and time-consuming, especially without established performance baselines that guide DBAs to the areas where their efforts will have the most impact. Establishing baselines is where SQL Sentry came into the picture for HealthcareSource—cutting analysis time and fostering a collaborative environment among DBAs and developers.

Find Out Why We're The One