Subway is one of the largest quick-service restaurant companies in the world, with 44,000 shops in 112 countries. The company focuses on serving great-tasting, nutritious food while reducing the environmental impact of the business.

Subway switched to SentryOne solutions to monitor, diagnose, and optimize QA testing and production databases, including those powering the company’s remote ordering platform.

Using SQL Sentry across the database environment, including Amazon RDS for SQL Server, Subway reduced the time spent collecting data and diagnosing each production performance problem from an hour to about five minutes, a 92% reduction. 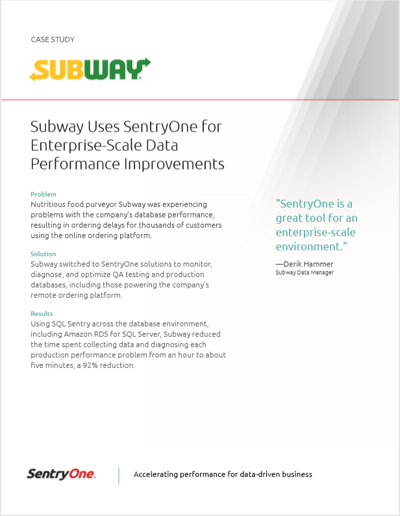 To learn more about how Subway reduced the amount of time spent collecting data and diagnosing production performance problems by 92%, download the 4-page case study.

“SentryOne is a great tool for an enterprise-scale environment.”

With 44,000 shops worldwide, Subway requires seamless data delivery to meet customer demand for the company’s submarine sandwiches. Derik Hammer, data manager for Subway, led the switch from an existing database performance monitoring solution to SentryOne to address chronic performance problems in an environment with 160 on-premises SQL Servers. “With our previous monitoring solution, on any given day we were missing anywhere from a few minutes to several hours of monitoring data,” says Hammer. “It just wasn’t coming to the repository. Once we started using SentryOne, we were able to instantly identify the problems and do something about them.” The enterprise scalability of SentryOne solutions was critical to Subway during their evaluation process, Hammer says.

Find Out Why We're the One