2017: Community Influencer of the Year

At the end of last year, I recognized Andy Mallon (@AMtwo) as my inaugural "Community Influencer of the Year."

Not to discount his prior contributions, but in my eyes at least, Andy burst onto the SQL Server scene in 2016, making a huge impact – both on me personally, and on the community as a whole.

Now, a busy year has passed us by. I spoke and traveled, though a bit less than usual, as I transitioned into my new role as a Product Manager here at SentryOne. I also spent a significant amount of time re-learning the ins and outs of real estate, as our family embarks on a move from Rhode Island to Matthews, North Carolina.

In spite of those activities, I was still able to keep my pulse on the community. Andy continues to be a fantastic community contributor, and has proven over and over again that he deserved his first MVP award.

This year, I want to acknowledge another individual who has also had some outstanding contributions to the SQL Server community... 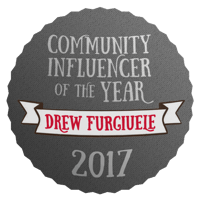 Drew (@Pittfurg) recently reflected on his year, in the post, "Keeping #sqlibrium: Looking back on what mattered most this year." It is a great retrospective on what he did in 2017, but a couple of things stood out to me:

In that post, he really downplayed the enormous buzz and awe that followed his launching a weather balloon into orbit with a SQL Server attached. The maiden voyage, in July, didn't go so well, but the follow-up was a tremendous success. Both were streamed live, and many people in the community followed along, almost certainly on the edge of their seats. This was a fun and exciting project, and he isn't done yet!

He also talked about his experience with the Dublin, Ohio Citizen Police Academy. They have a program where you really get exposed to the kinds of things police officers do, to the point of performing your own mock traffic stop. Now, this doesn't relate to SQL Server at all, but to me demonstrated his interest in engaging with his real-life community. When he talks about it, he encourages us all to do similar things in our own communities, and I'll confess it's the first time I had ever thought about doing anything like it.

Like many of us, Drew blogged a bunch, spoke at more SQL Saturdays and user groups than I could count, gave his first session at the PASS Summit, talked about PowerShell at the GroupBy conference, and contributed to dbatools.io. And that's not even an exhaustive list. Okay, maybe that's not quite like many of us, but it is very inspirational. This guy is a lot more organized than most of us, too; he keeps a fancy running timeline of his community contributions and other activities here.

I've nominated Drew for the Microsoft MVP award and, if he's affected you in a positive way, I encourage you to do the same. In fact, you can do that for *anyone* who you think is making great contributions to the community.

As an aside, I'm not ashamed to admit that I was very excited when I finally learned to spell his last name correctly without looking it up.