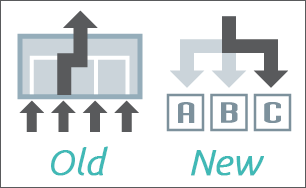 We added a little more contrast to our icons - giving them better visibility on large screens or zoomed-out plans - and swapped a few out for more intuitive graphics (I am particularly fond of the new visualization for Switch). I showed the set of icon changes, which included correcting the icons for key and RID lookups, in a recent post about the Plan Explorer extension for Azure Data Studio.

The initial implementation of the start page inside Plan Explorer used a control based on Internet Explorer. This wasn't really a problem, except that to get HTML/CSS to play nice there and also in Chrome was rather tedious. In addition, the IE control forced Internet Explorer to be the handler for all links. Given Microsoft's shift away from Internet Explorer and their increasing development on a Chromium-based version of Edge, it was time to switch out.

In a few isolated situations, missing index recommendation scripts were being generated with an additional trailing comma in the column list. We've identified these edge cases and resolved the issue.

#49189 : Exception occurs when no plan is associated with a statement

In certain scenarios, when matching statements with trace rows, there would be a "miss" - meaning we were unable to match a statement directly. If you clicked on a row in the statement grid when such a miss happened, an exception was raised. We've done two things as a result: we've bolstered our statement matching logic, and we also now handle the exception more gracefully.