Features and Fixes in SentryOne 19.2

We are excited to announce the release of SentryOne 19.2, which includes completed queries for DB Sentry, as well as some additional enhancements and fixes. Let’s take a look at each of the new features.

This feature is easily the most important update in this release. The screenshot below shows completed queries and query history in Top SQL for an Azure SQL Database target. You will notice that Top SQL in DB Sentry is now remarkably similar to what you would see in SQL Sentry for an on-premises SQL Server target. 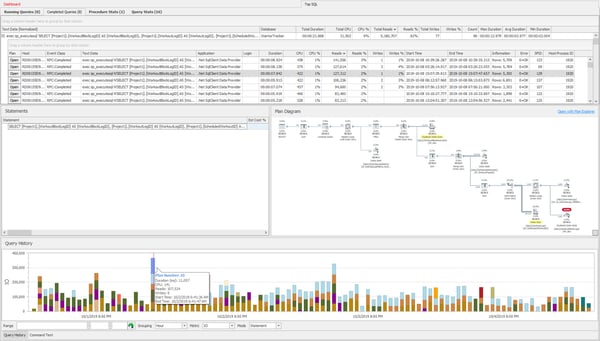 Note that if you are upgrading from an earlier version of DB Sentry, you will need to ensure that Collect Trace Events and Collect Statement Events are enabled after the upgrade, and that the target allows creating SentryOne objects. Because of the way we’ve changed our collection techniques from the simple DMV polling in earlier versions, these settings are disabled during an upgrade, and you will need to “opt in” to the new behavior.

Check out this video for a walk through of DB Sentry’s Azure SQL Database Top SQL.

Top SQL parity is the first in a string of DB Sentry enhancements planned for the coming months. Other enhancements include Azure Active Directory (AAD) authentication, elastic pool support, blocking, deadlocks, and index and statistics management. We’ll have more to share about these changes soon.

We have added a handful of optional columns to Top SQL in SQL Sentry. These columns provide more information about memory usage for a given statement. The following screenshot shows a few of these columns on the Completed Queries grid and the rest of the columns that are now available in the column chooser.

Get Started with SentryOne 19.2 Today!

View a full list of the features and fixes included in SentryOne 19.2 here.