Everyone working with data platform solutions faces data quality issues at some point in their career, often more than once. At SentryOne, we’re proud to build solutions that make data professionals' lives easier. With that in mind, I’m happy to announce the release of SentryOne Test into Preview.

Our new solution is aimed at making data validation simpler, faster, and more integrated into how we manage and work with data daily.

SentryOne Test is a data validation framework that builds upon the power of MSTest and NUnit to allow data-focused testing. Based on industry standards, SentryOne Test easily integrates into build and automation processes. Wrapped around this core are services that provide the ability to schedule test runs, as well as dashboards that display test success metrics and the data behind test failures. 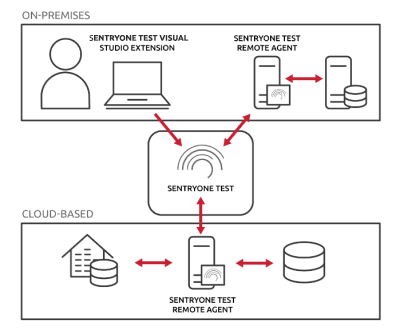 As you can see in the above illustration, the remote agent allows for a distributed test execution capability. The remote agent, and the test framework that you are using, can be installed onto Windows virtual machines in your trusted networks—on-premises networks, Azure, AWS, etc.

The SentryOne Test web portal is hosted as software as a service (SaaS). It’s also available to be deployed on-premises, allowing you to make full use of SentryOne Test to perform data validation on all your data.

The SentryOne Test (formerly LegiTest) extension brings data validation testing within easy reach for developers and other data professionals. Within the Visual Studio environment, you can create SentryOne Test projects based on the MSTest or NUnit framework where you define your tests. These tests can range from simple row-count comparisons to implementing complex row-by-row, column-by-column data comparisons. The power of the SentryOne Test extension is implementing these tests without needing to write complex logic for key matching or data comparisons.

Within the extension, you can define setup and teardown steps to execute at different scopes as part of the test process. You can also call REST APIs, execute SSIS packages, or run SQL statements before and after each test or group of tests.

From a connectivity perspective, SentryOne works with more than just SQL Server and the Microsoft Data Platform. You can connect to and compare data among Oracle, SQL Server, delimited files, and other data sources, giving you the flexibility to validate data in many different scenarios.

You can execute the resulting SentryOne Test projects as part of a CI/CD build pipeline, integrated with the SentryOne Test web portal, or published to the portal and scheduled via the Remote Agent—all of which allows for tighter integration and automation of data validation processes into your data platforms.

The SentryOne Test web portal was built from the ground up using a microservice architecture. It includes a full API layer, so you can deploy test projects to SentryOne Test and then call them programmatically if needed.

The web portal contains dashboards that display test activity across all the projects that are deployed and have been configured to publish data to the SentryOne Test service. From the main dashboard, you can then drill down into the test failures and see exactly why tests are failing, including the data behind the test. This visibility helps you convince business stakeholders to collaborate on owning the data validation process and lets them see what data needs to be fixed.

Integration with the Remote Agent allows for tests to be pushed out and executed on remote servers, while still providing access to centralized results. It’s possible to have a mix of MSTest and NUnit tests deployed to SentryOne Test, and then allocate and schedule them on the Remote Agents as needed. This gives you the power to schedule data validation tests on production business data and to share the results simply and easily with business users.

Within the web portal, you can create tests using the SentryOne Test “recipe” framework for common tests. With this capability, business and power users can build test criteria without Visual Studio.

The Remote Agent is the final piece of the puzzle when it comes to building out a robust data validation solution. By deploying the Remote Agent close to your data sources, whether they are in the cloud or on premises, you can ensure that access to your data takes place in your environment. There is no need to expose any of your databases or data sources to the internet to make use of SentryOne Test. With the Remote Agent installed locally as a Windows Service, you can constrain access to accounts and systems over which you have full control.

As of today, we’re entering the public preview of SentryOne Test. During the preview phase, from now through mid-April, you can lock in introductory pricing for this new SaaS-based data test and validation solution at $49 per month. When we announce General Availability in mid-April, pricing will shift to $99 monthly. This service will continue to evolve as we add new capabilities.

If you’d like to see how SentryOne Test can help solve your data test and validation challenges, I encourage you to check it out during the preview phase. By choosing to be a preview customer, you’ll not only get friendly pricing locked in for the first year but also be the first to hear release news, and you’ll have the option to provide feedback that helps us shape the service in the future.

Building the People, Processes, and Technology for a Data-Driven Culture with Intelligent DataOps
Help Your Customers Stop Bad Data with SentryOne Test