What is MDX and DAX Query Analysis?

You'll find this feature in:

Are you in the dark about SQL Server Analysis Services (SSAS) performance?

Are you becoming more dependent on the power of SSAS to provide critical business intelligence for your company—but frustrated when SSAS performance is slow?

You're not alone. When Microsoft introduced SQL Server Analysis Services (SSAS) in 2000, SSAS was specifically designed to support databases based on a multidimensional (OLAP-style) model. Over the years, SSAS has evolved and now also supports an entirely separate data model, SSAS Tabular, which in SQL Server 2017 has become the default installation model.

Multidimensional Expressions (MDX) is an industry-standard query and calculation language used to retrieve data from OLAP databases. MDX can also be used to query data in an SSAS tabular database as long as the database is not configured to run in DirectQuery mode.

SQL Sentry can highlight resource contentions on the server if your SSAS Storage Engine is creating and updating cubes with new data, or if the Storage Engine is recalculating and reorganizing existing data while also processing new MDX queries.

SQL Sentry's MDX-specific Performance Counters such as Total cells calculated and Total recomputes can help you better understand whether your MDX queries are optimized or not. 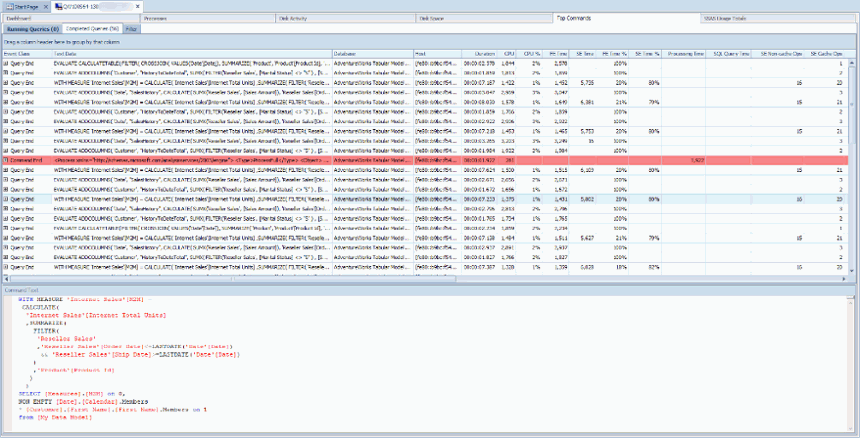 SQL Sentry also shows you whether MDX performance is impacted by SSAS server constraints such as CPU, memory, disk, or network resource limitations.

SQL Sentry provides internal details for DAX (as well as MDX) on Tabular models. You can see SSAS Storage Engine vs. Formula Engine time per query; internal VertiPaq cache matches and scans, and quickly identify callbacks to the Formula Engine, allowing you to pinpoint your Tabular model query bottlenecks.

“We are more efficient in diagnosing performance issues with SentryOne. Time spent on this type of diagnosis has decreased by about 75%.”