An Introduction to Key SSIS Functionality

SQL Server Integration Services (SSIS) is a popular and mature tool for performing data movement and cleanup operations. In the Microsoft ecosystem, SSIS is one of the most common extract, load, and transform (ETL) tools in use today. SSIS is powerful and configurable, yet surprisingly easy to use.

This guide walks you through the essential moving parts of SSIS.  Check out the next guide in this series that focuses on how to build your first SSIS package. 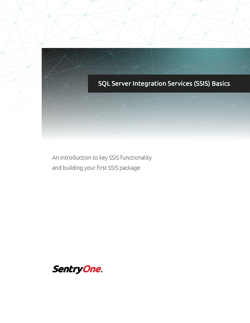 Before we explore the machinery of SSIS, it’s important to understand some of the terms you’ll often hear used by SSIS professionals. Here are some of the key terms and phrases you’ll need to know to be successful with SSIS.

SSIS is licensed as part of SQL Server, and the internals of running an SSIS package can be installed as part of the normal SQL Server install. As an SSIS developer, however, you will need a couple of additional tools installed on your workstation:

Do you want to accelerate ETL processes and eliminate many tedious SSIS programming tasks?

Dozens of high-performing SSIS components that help you save time managing ETL tasks.

If you’ve ever worked with Visual Studio, the SSIS development environment will look familiar. SSDT uses the same multiple-document interface (MDI) that enables you to open or close each SSIS package independently, open several packages at once, and conveniently dock them as needed.

Inside this development environment, you’ll be frequently using the following assets:

Figure 1 shows the SSDT designer with each of these assets called out. 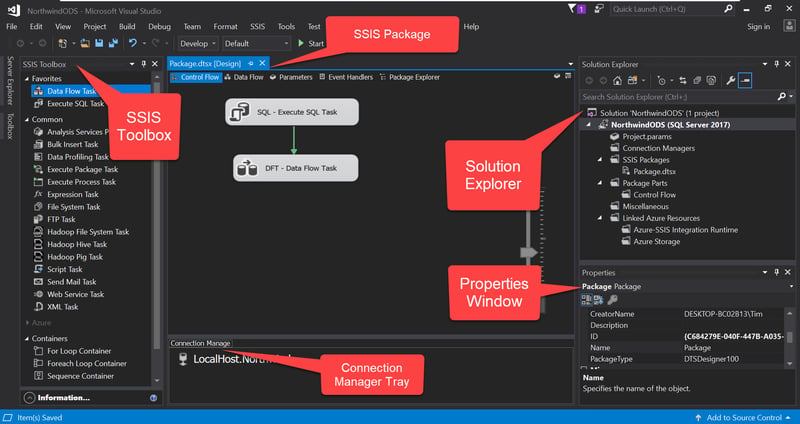 Within each SSIS package, there is a set of tabs you can use to navigate the various layers of that package. Highlighted in Figure 2 is the set of tabs for a single package. 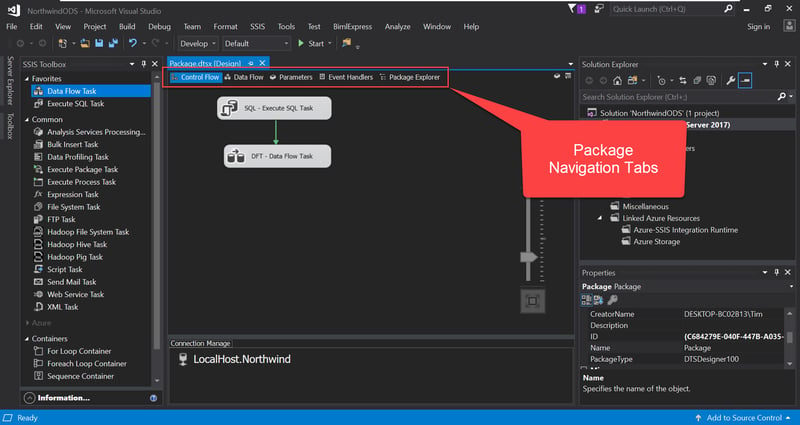 The first four tabs listed—Control Flow, Data Flow, Parameters, and Event Handlers—are all essential parts of navigating an SSIS package. We’ll dive into each of these tabs later in this article.

To start the execution of an SSIS package in SSDT, you can use one of three methods:

The Moving Parts of SSIS

Within each SSIS package, there are several fundamental moving parts.

Connection managers are unique in that they can be defined at the package level or at the project level. Package and project connections have the exact same functionality; the only difference is the scope of visibility. Package connections are usable within the package in which they are created, while project connections are accessible to any package in that project. The latter is very handy when creating a project that uses the same connection in multiple packages. 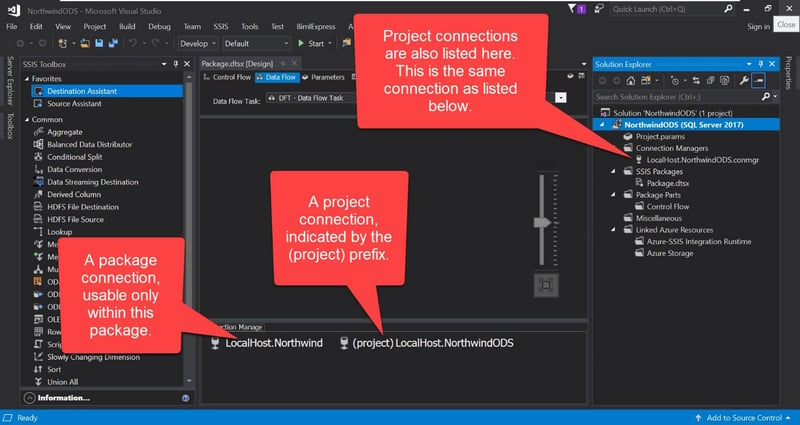 The Control Flow and Data Flow tabs represent the workspace in which most of the package logic resides. We’ll go into greater detail on each of these tabs in the next section.

Variables are defined at the package level and, by default, are accessible by any task or component within the package. Each variable will have the following attributes:

The Variables window, shown in Figure 4, is used to create or edit variable values.

Variables in SSIS provide a great deal of flexibility when designing SSIS packages. Variables can be used to store operational values (such as row counts), configuration values (such as a particular file name when looping through multiple files), and can even be used to process serialized object data.

Parameters were introduced in SSIS with the release of SQL Server 2012 to easily pass in runtime values to a package. Using SSIS parameters makes a project much more flexible by eliminating the reliance on hard-coded values.

Parameters behave a lot like SSIS variables. They both require a data type definition, can both be set with a default value, and can reduce administrative work by eliminating hard-coded static values within a package. There are some important differences, including:

Parameters are incredibly powerful in that they allow you to completely decouple values that might change over time, including database connection strings, file paths, and login credentials, from the source code. By using parameters to pass in these values at runtime, you can eliminate a lot of unnecessary code changes. Parameterizing values such as these also makes testing easier, by allowing a separate set of test values to be passed in at runtime with no code modification. 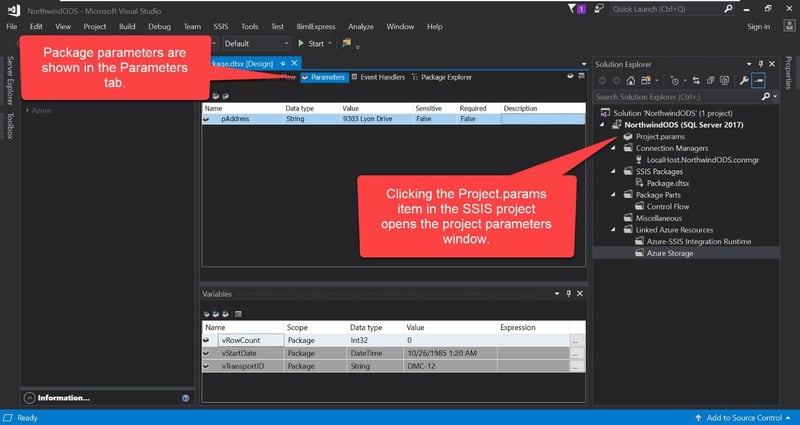 To create or edit package parameters, open the package and click the Parameters tab. Project parameters can be found by opening the Project.params file in the SSIS project.

SSIS has its own expression language for creating dynamic behaviors. Almost every task and component in SSIS can use expressions for replacing otherwise static values with a short bit of code that is interpreted at runtime.

Some of the practical uses for expressions in SSIS include:

To view the expressions available for any given task or component in SSIS, you can select the item (indicated by the arrow) and find the Expressions item in the Properties window (shown inside the rectangle), as shown in Figure 6. 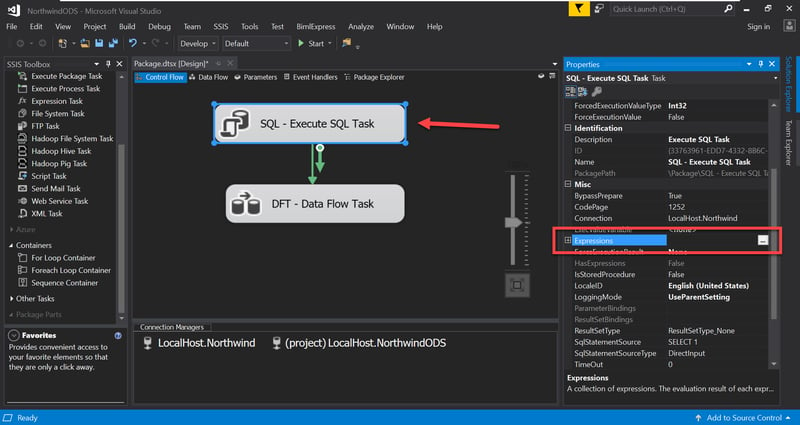 Expressions are incredibly powerful in SSIS, but they do take a bit of getting used to. Don’t feel alone if you initially struggle with the syntax of the SSIS expression language; every SSIS developer who has ever worked with it has had moments of frustration when adapting to this new lingo. Use the Expression Builder to get acquainted with the nuance of creating SSIS expressions.

Learn more about SSIS with these free on-demand webinars 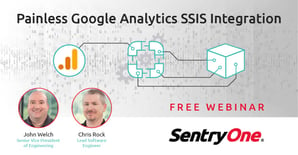 When working with the SSIS control flow, there are three different types of objects you’ll use: tasks, containers, and precedence constraints. 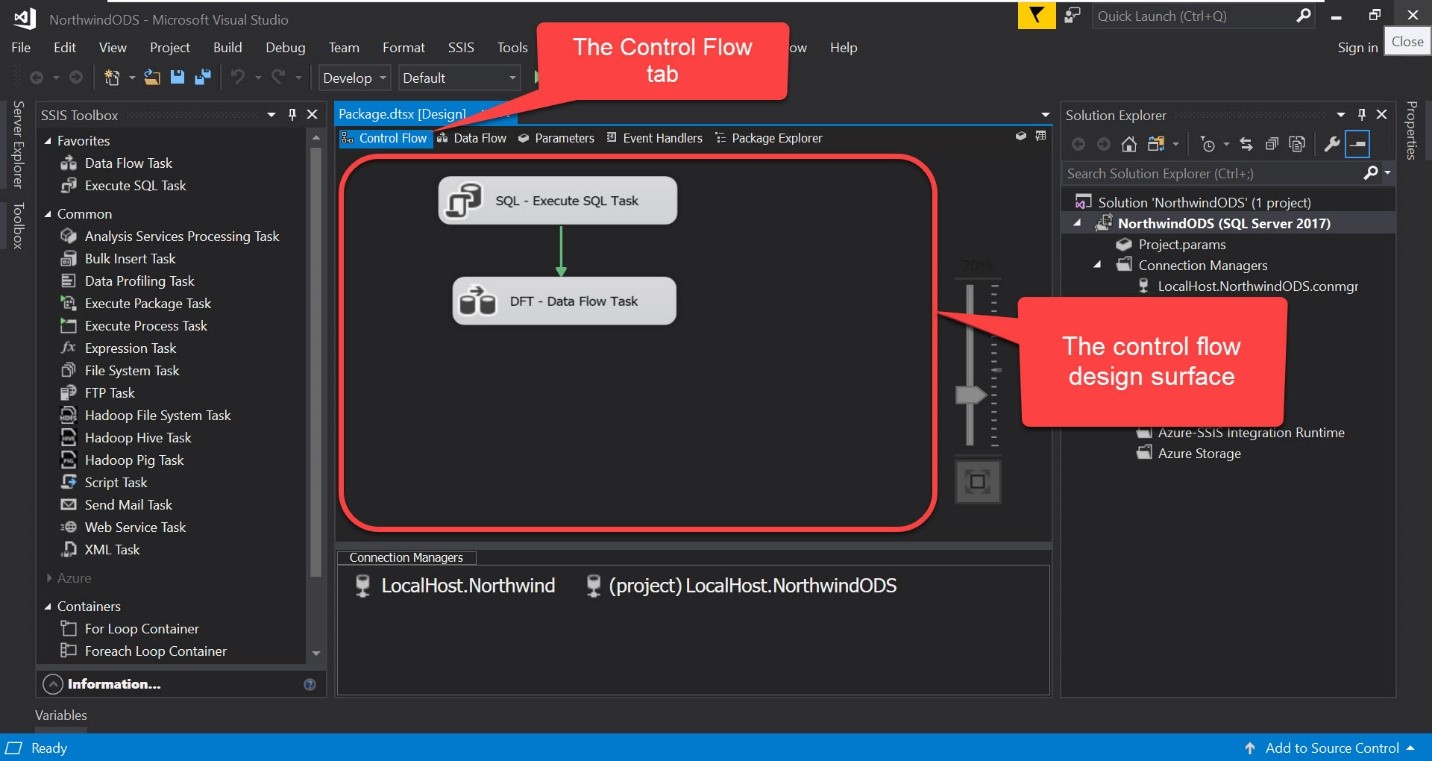 Simply put, an SSIS task is a single operation in a package. A single package can contain many tasks or, in some cases, just one.

SSIS has dozens of built-in task types designed to handle almost any ETL need. When the Control Flow tab is selected, the SSIS Toolbox (docked on the left in Figure 8) lists all the available tasks. The following are some of the most used tasks:

Although there are numerous other tasks for less common operations, the tasks in this list can handle the vast majority of ETL needs.

Included in the SSIS control flow is a set of three containers that can be used to bind together and loop through sets of tasks.

The foreach loop is especially useful when processing different but identically shaped sets of data; for example, when ingesting or exporting flat file data. Figure 9 shows an example of a foreach loop container configured to loop through each CSV file in the given directory. 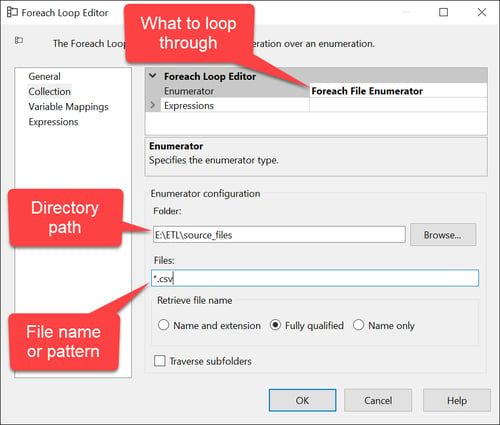 At first glance, a precedence constraint looks like a simple connector. As Figure 10 shows, the precedent constraint indicates that the Execute SQL task will be started first, followed by the Data Flow task. 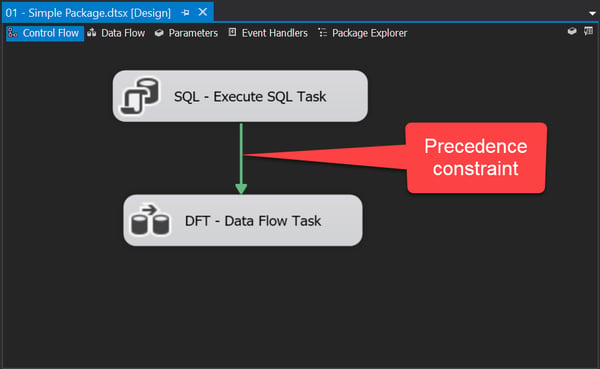 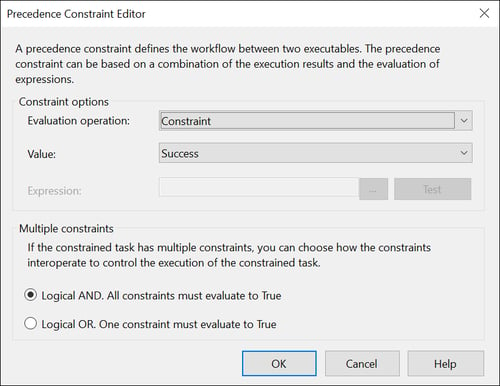 The configuration options available include:

Figure 12 shows an example of using multiple precedence constraint for both success and failure operations.

The setup shown in Figure 12 results in the following workflow:

Using containers and precedence constraints, the workflow of the package can be as simple or as complex as needed.

Note that, in this example, the event handler logic has not yet been set up; to create an event handler for this executable and this event, you can click the hyperlinked message in the middle of the design surface. The SSIS Toolbox for this tab shows all the tasks commonly available in the control flow.

Event handlers are useful tools but be careful that you don’t overuse them. Because the event handler logic can be set up individually for every task and container (as well as for the package itself), the overuse of event handlers creates a labyrinth of logic that is very difficult to maintain and debug.

As mentioned earlier, the Data Flow task is one of many tasks in the SSIS Toolbox. However, this task differs significantly from the other tasks in that it has its own child elements, referred to as components, that can be connected to create end-to-end data flow operations. 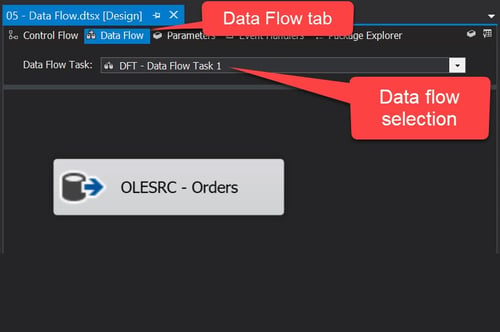 Each of the SSIS data flow components is classified into one of three categories: sources, destinations, and transformations. Most data flows consist of at least one source and one destination, and optionally contain one or more transformations. Figure 15 shows an example of a simple data flow design with an OLE DB source connecting to a SQL Server table, using a derived column transformation to trim the whitespace from each character field and then writing the data to a flat file destination. 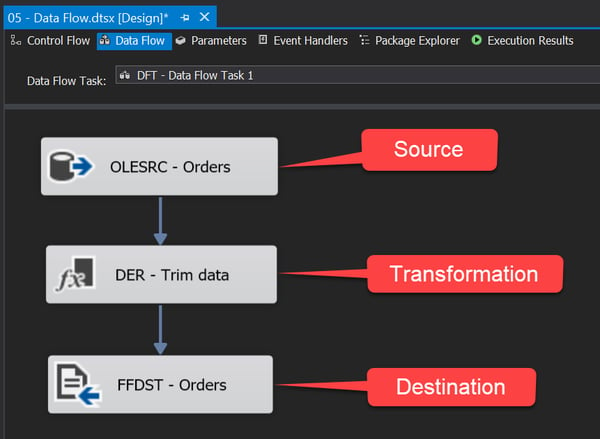 Not every Data Flow task will be this simple, of course. Complex problems require more complex solutions, and it’s not uncommon for there to be a dozen or more transformations between the source and destination. Using a transformation such as the conditional split or the lookup transformation allows data to be split into multiple outputs, which can add even more complexity to the data flow. The bottom line is that a Data Flow task can be as simple or as complex as needed.

To learn how to create your first SSIS package, check out this guide or download the free PDF! 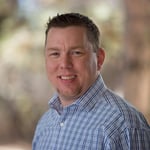 Tim Mitchell is a Business Intelligence architect, author, and trainer. He has been building data solutions for over 15 years, specializing in data warehousing, ETL/SSIS, and reporting. He holds a Bachelor’s Degree in Computer Science from Texas A&M at Commerce, and is recognized as a Microsoft Data Platform MVP. Tim is the founder and principal data architect at Tyleris Data Solutions, a consulting firm focused on delivering on-premises and cloud-based solutions on the Microsoft Data Platform.

As an active member of the community, Tim has spoken at international, regional, and local venues, including the PASS Summit, SQLBits, SQL Connections, SQLSaturday events, and various user groups and webcasts. Tim is coauthor of the book “SSIS Design Patterns,” and is a contributing author on the charity book project “MVP Deep Dives 2.” He is a member of the Boulder BI Brain Trust, a Melissa Data MVP, and is active in the North Texas SQL Server Users Group in the Dallas area.